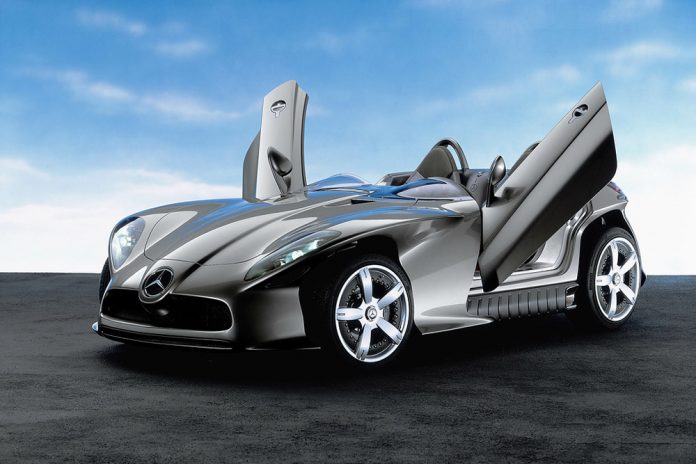 As a constant innovator of automotive engineering, Mercedes-Benz sometimes takes unconventional paths. One example is the F 400 Carving research vehicle, which the brand presented at the Tokyo Motor Show (14 October to 7 November 2001) in October 2001, 20 years ago. It features many future-orientated systems, amongst which the active camber adjustment of the wheels is the main attraction: The vehicle appears to lean into the curve – in a way similar to a winter athlete on carving skis. Today, the F 400 Carving can be seen at the Mercedes-Benz Museum in the “Fascination of Technology” section. This section is accessible free of charge via the atrium.

The innovative system increases the camber angle of the outer wheels of the curve to up to 20 degrees, depending on the driving situation. In conjunction with newly-developed tyres, this enables 30 per cent greater lateral forces to be transmitted than a suspension with a fixed camber setting and standard tyres. This means a considerable advantage in active safety because the greater the lateral forces of the tyres, the better the tyres’ road contact and the vehicleʼs cornering stability. Thanks to active camber control, the research vehicle achieves a maximum lateral acceleration of 1.28 g, surpassing the values of sports cars of the time by around 28 per cent.

The innovative tyres have an asymmetric tyre contact surface. When the wheels on the outside of the curve lean to the side, the two-seater rides on the inner tyre treads, which are slightly rounded and whose profile and rubber blend are specially designed to ensure high cornering dynamics and safety. When driving straight on, on the other hand, it is the outer sectors of the tyres that are in contact with the road. These areas have a tried-and-tested car tread pattern with excellent high-speed and low-noise performance. Thus, thanks to active camber control, two different concepts are realised in one tyre.

With the F 400 Carving, the engineers also gained experience in the use of new types of suspension technology in active safety. In addition to the higher driving stability in curves, active camber adjustment offers a clear advantage in driving safety in emergency situations. If, for example, the wheel camber is deliberately increased when there is a risk of skidding, the higher lateral guidance forces can sustainably assist the effect of the ESP® Electronic Stability Program. The F 400 Carving shows how: in an emergency braking manoeuvre, all four wheels of the research vehicle can be cambered in a flash, reducing the braking distance at 100 km/h by a good five metres.

New possibilities for electronics and electrics

Mercedes-Benz presented further innovations in the F 400 Carving 20 years ago. The two-seater, for example, has a future-orientated steering, braking and suspension system. This includes steering and brakes with electrical components instead of mechanical connections – the engineers call this concept “drive by wire”. The engineers also broke new ground in suspension tuning, using active hydro-pneumatics for the first time in the latest-generation Active Body Control (ABC), which adapts both the suspension and the damping of the vehicle to the driving situation at lightning speed.

With xenon lamps, in which light is conducted to the headlamps by means of fibre optic cables, the Stuttgart automotive researchers also presented a completely new type of lighting technology in the F 400 Carving. In curves, additional headlamps placed on the sides are activated. The indicators work on the basis of high-performance light-emitting diodes whose light is spread with the help of prismatic rods. A 42-volt on-board electrical system is available for the power supply of all components. Finally, the materials: the body of the research vehicle is made of carbon-fibre reinforced plastic and the chassis is of space frame design using steel, aluminium and also carbon-fibre reinforced plastics.

In 2001, the Mercedes-Benz F 400 Carving appears like a messenger from a fascinating future. In the meantime, some of its numerous innovative features have been incorporated directly or in modified form into the brand’s standard models. This shows that automotive development never stands still, and the unique Mercedes-Benz knowledge pool is fully available to all generations of engineers.

Renault and TheArsenale Unveil AIR4: Where We’re Going, We D...

1927 Mercedes-Benz Model K Celebrated as Best In Show at the 25th Greenwich Conc...