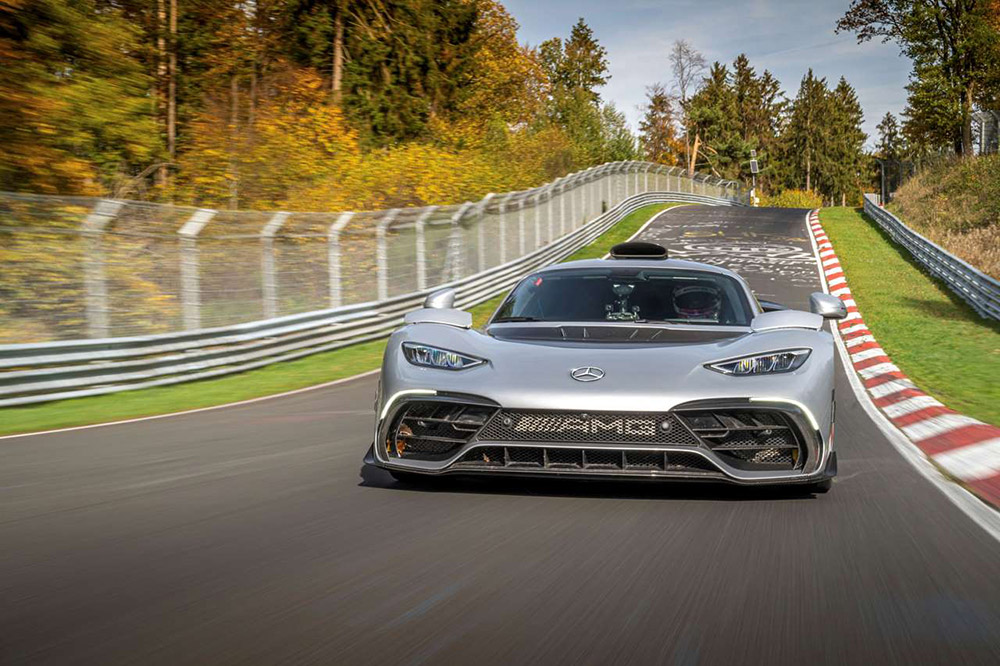 The record-breaking drives on October 28, 2022 were hard to beat in terms of excitement: at exactly 17:14:31, racing driver and AMG brand ambassador Maro Engel took to the track for the last attempt of the day and burned the new, fabulous time into the legendary and demanding Eifel asphalt. This was truly not a minute too early, because the track would have been officially closed at 17:15. Although Maro Engel had already set a new best time beforehand, the DTM driver was not yet satisfied. Towards the end of his track slot, the conditions were getting better by the minute. Thus, Maro Engel took advantage of the very last opportunity and improved the lap time to the new official record of 6:35.183 minutes. Based on the track variant known from the sport auto Super Test, the lap time is 6:30.705 minutes.

“That was really an unforgettable experience,” said Maro Engel after completing the record lap. “I didn’t expect that we would be able to set such a lap time with these track conditions. In some crucial areas of the track, it hadn’t dried completely yet and was therefore tricky. That was a special challenge. We tried to find the optimal deployment strategy during the pre-tests. Like Lewis Hamilton and George Russell on their race weekends, I also had to deploy the electrical energy of the hybrid drive in the best possible way. That’s not easy, especially with this length of track. In addition, the DRS function had to be used optimally. But that’s also a real Formula 1 feeling. I would like to thank you for this opportunity and the trust you’ve placed in me. It was definitely something very special to drive this incredible car on the Ring.”

“I’m proud of the whole AMG team – everyone who was involved in this project. The various departments in Affalterbach as well as our colleagues at HPP in Brixworth never gave up and continued to push the dream of this vehicle. This success is the well-deserved reward for their hard work. Even though the AMG ONE is certainly more at home on a Grand Prix circuit than on the Nordschleife – as is so often the case with this project – we’ve simply gone one step further. We’re the first ever to have taken on the challenges of the Nürburgring with a super sports car. That’s also what makes this project so unique and I’m very happy about this fantastic lap time,” said Philipp Schiemer, Chairman of the Board of Management of Mercedes‑AMG GmbH.

At first, it didn’t look like a new record. The weather was sunny with a light wind, but the track was – typical of the Nürburgring in autumn – still damp and partly dirty in some areas. In some sections, such as the fast “Kesselchen” section, the ideal line had not yet completely dried. All in all, they were not ideal conditions – especially for a vehicle in this extreme performance class. By the time the track was passable for a first fast lap, the remaining time had whittled down to less than an hour. With air and asphalt temperatures of just under 20 degrees Celsius, this was only enough for a maximum of four fast laps.

Mercedes-AMG brought two ONEs to the Ring, which meant that the limited time could be used effectively. According to the specifications of Nürburgring 1927 GmbH & Co. KG, both vehicles were inspected and documented by TÜV Rheinland to ensure that they were in series production. A notary confirmed the proper condition of the vehicles and the correct execution of the record runs.

Record vehicle in series-production condition
Technically, the record-breaking vehicle had everything that the Mercedes-AMG ONE offers as standard – the hypercar brings Formula 1™ hybrid-drive technology from the racetrack to the road for the first time. With one combustion engine and four electric motors, the E PERFORMANCE hybrid delivers a total of 782 kW (1,063 hp), with the top speed capped at 352 km/h. The other motorsport technology ranges from the carbon monocoque and carbon body to the engine/transmission unit as a stressed member and active aerodynamics to the push-rod chassis. With its complex technology, the two-seater Mercedes-AMG ONE offers even more than a Formula 1™ racing car in some cases. It features the fully variable AMG Performance 4MATIC+ all‑wheel drive with a hybrid-driven rear axle and electrically driven front axle with torque vectoring.

For the record drive, the maximum camber values within the delivery tolerance were selected. Maro Engel chose the “Race Plus” driving programme. This means active, maximum possible aerodynamics, tight chassis tuning, vehicle lowering by 37 mm at the front axle and 30 mm at the rear axle and, of course, full power from all motors. The Drag Reduction System (DRS) is activated by the driver by pressing a button on the steering wheel. This retracts the front louvres on the wings as well as the upper aero element of the two-stage rear wing. If the system detects deceleration or a certain degree of lateral acceleration, the aero elements extend again in a flash.

Intelligent driving for optimal energy management
The record lap in the hybrid super sports car with Formula 1™ technology required not only driving skills, but also an intelligent driving style: Maro Engel used special energy management for the lap of the 20.8 km Nordschleife. This means that he could not accelerate to the maximum possible speed on all sections of the track, but also had to manage his energy. To do this, he used the four-stage Energy Flow Control (EFC) of the AMG ONE and let off the gas a little earlier in some sections, known as “lift and coast” in technical jargon. In addition, Maro also used energy recovery in the braking phases. Thus, even on the long Döttinger Höhe, the high-performance battery still offered enough power for a 338 km/h top speed.

AMG ONE customers can also take advantage of all these variation options. This also applies to the MICHELIN Pilot Sport Cup 2 R MO tyres, which are fitted as standard and were specially developed for the ONE in collaboration with development partner Michelin. The standard AMG ceramic high-performance composite braking system ensures the highest possible deceleration and stability.

The fast lap times were precisely measured by the neutral experts of “wige SOLUTIONS”. An independent notary also certified the proper condition of the vehicle and the measurements with an 11-page certificate.