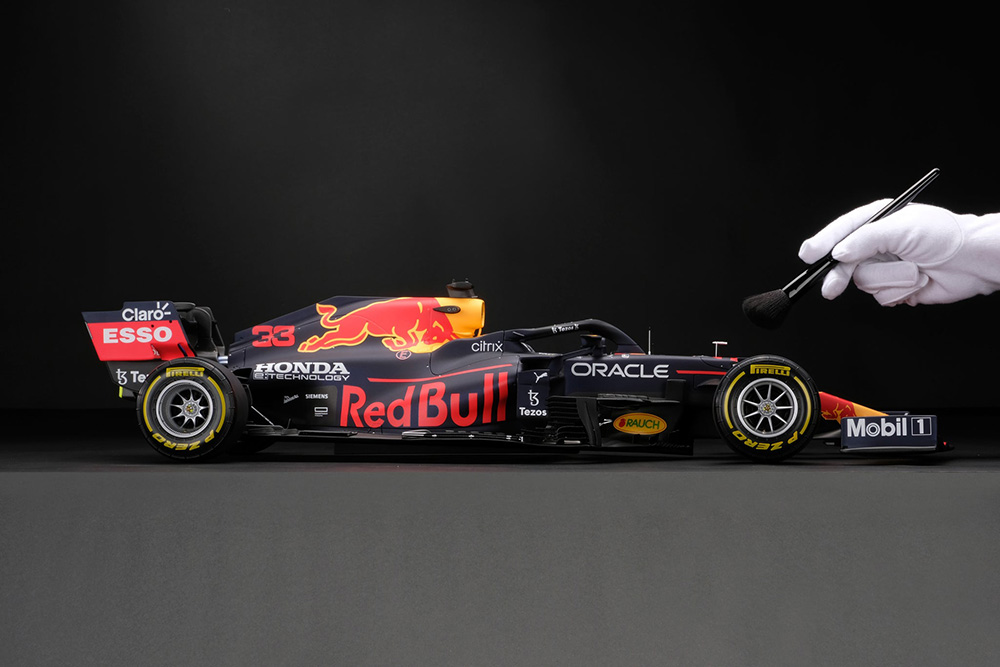 Amalgam Collection, creators of the finest large-scale models in the world, shared the first images of their most recent project at 1:8 scale: the Red Bull Racing Honda RB16B, as raced by Max Verstappen and Sergio Pérez at the season-defining 2021 Formula 1 Etihad Airways Abu Dhabi Grand Prix. The Bristol-based artisans have precisely captured every detail of the car that delivered the first ever Dutch Formula 1 World Champion in Max Verstappen and a first World Drivers’ Championship to Red Bull Racing since 2013.

Amalgam’s model at 1:8 scale perfectly recreates every aspect of the RB16B’s complex aerodynamics along with its distinctive Red Bull Racing livery. Working from CAD data supplied directly by the Red Bull Racing team, Amalgam’s engineers developed a pattern for each component of the model, utilising the team’s data to ensure that the details were accurately reflected at an 8th of the real car size. The master patterns were created for each piece of the complex assembly using 3D printing, followed by meticulous hand finishing. Moulds were then taken from each pattern and used to create a small batch of cast components, each one fettled and fitted to make a complete set, before painting, finishing and assembly.

The edition of RB16B models, strictly limited to 99 pieces for each driver, necessitated over 2500 hours of development and the resulting prototype only received the approval of the Red Bull Racing designers and engineers once they were fully satisfied with its accuracy of representation. Measuring over 69 centimetres (27 inches) long, each subsequent model took 250 hours to cast, fit, fettle, paint and assemble, as Amalgam’s team of artisans focused on ensuring that every minute detail was accurately depicted.

Sandy Copeman, one of Amalgam’s founding partners, said “We have collaborated closely with Red Bull Racing for fifteen years now, first building models of the RB3 cars driven by David Coulthard and Mark Webber, before moving onto the double Championship-winning cars of Sebastian Vettel. Now we have enjoyed the opportunity to celebrate the latest success of a team that continues to earn its place at the front of the grid, along with a driver who looks well set to continue making Formula 1 history.”

The 2021 FIA Formula 1 World Championship season was one of the tightest and most contentious seasons ever recorded, with several flashpoints during a bitter season-long contest between Verstappen and his title rival Lewis Hamilton. Red Bull Racing took the fight to the hybrid-era dominating Mercedes team and, though the Milton Keynes-based team would ultimately be unsuccessful in its Constructors’ title aspirations, Verstappen would emerge victorious against the reigning Drivers’ Champion Hamilton in the most dramatic of fashions. It was an ending fit for this most chaotic and captivating of seasons, as a late Safety Car period was necessitated after Nicholas Latifi’s Williams crashed into the wall, allowing Verstappen to pit again and attack Hamilton on much fresher tyres on the final lap of the season. The Dutchman passed at Turn 5 to close out victory and, with it, the 2021 World Drivers’ Championship title.

The Red Bull Racing Honda RB16B at 1:8 scale is available from www.amalgamcollection.com.

Amalgam Collection to Auction ‘Hidden Treasures’ from Their Archive