Based on chassis #0858, as raced to second position by Ludovico Scarfiotti and Mike Parkes in the 1967 24 Hours of Le Mans. 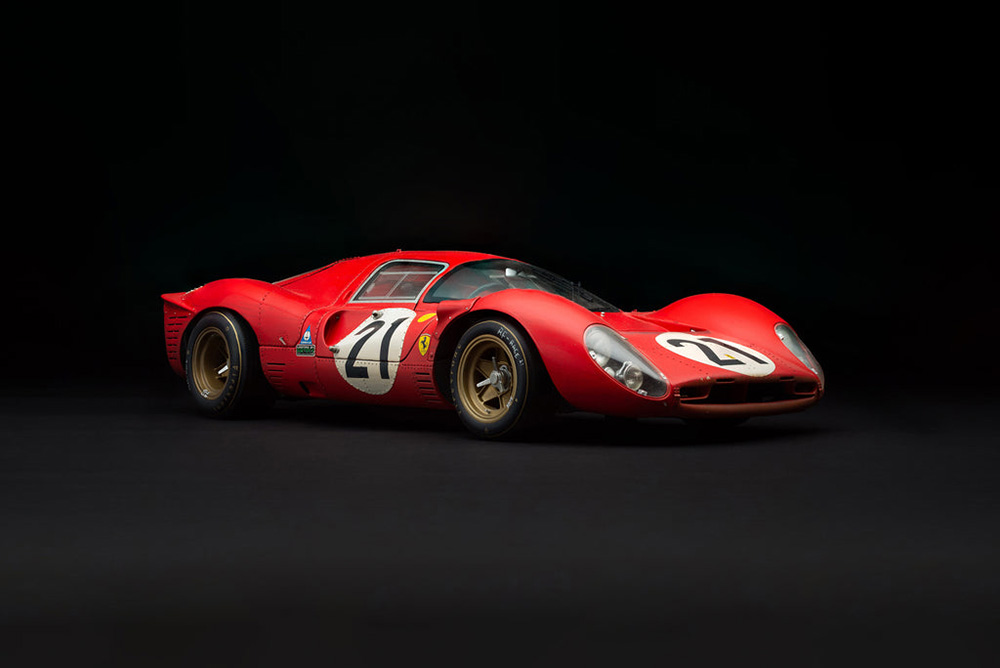 Amalgam Collection unveiled the most recent addition to their exclusive collection of Race Weathered models: the Ferrari 330 P4 at 1:8 scale. This new edition is based on chassis #0858, as raced to second position by Ludovico Scarfiotti and Mike Parkes in the 1967 24 Hours of Le Mans.

This special series of weathered models is limited to just 21 pieces worldwide, and each model has been meticulously hand-painted and detailed by the artists in the company’s Bristol workshop to show every detail of the race dirt as seen as the car crossed the finish line. The first of these twenty-one models is available for immediate sale, subject to a final quality assurance assessment, with a further batch already scheduled for completion in May. Every order will be accompanied by an archive quality A1 Giclée print of the car during the race, selected by Amalgam from the Motorsport Images collection.

Each model is fashioned from thousands of precisely engineered parts, including openable doors and a fully functional engine cover. Underneath the engine cover lies a perfect reproduction of the 450hp four litre V12 engine that was radically redesigned by Franco Rocchi, complete with mud and oil spatter. The sparse racing cockpit is visible through the openable doors with every detail perfectly replicated right down to the racing harness buckle. Across the exterior of the car, every splash of dirt, mud and oil has been recreated, including the paint chips on the front end.

Founder of Amalgam Collection, Sandy Copeman said “We take great pride in the accuracy across all of our models, with exceptional attention applied to the painting of our Race Weathered editions. Our artists refer to authentic archival imagery to ensure the completed model is a faithful replica of the real car as it finished the race in 1967.”

The artistic painting of the race weathering is significant, but it is just the final stage in the creation of a complete work of art that started with the development of the model itself. Working with CAD data developed from a digital scan of the only perfect non-modified example of the 330 P4 left in existence, the artisans develop a prototype, meticulously scaling down the data to ensure that the details are brought to life in miniature. Moulds are created for the individual parts, with metal, carbon fibre and rubber used to create each piece of the intricate puzzle, while some parts are produced by 3-D printers. Development of the 1:8 scale model took over 4500 hours, and only concluded once the authorities at Ferrari Classiche were fully satisfied with the accuracy of representation. Measuring over 52cm (21in) long, each subsequent model will take over 400 hours cast, fit, fettle, paint and assemble, before the weathering process even begins.

The 330 P4 is the tenth Race Weathered edition to be developed by the Bristol-based firm, and joins the burgeoning collection that already includes classic racers such as Sir Stirling Moss’ Mercedes-Benz W196 Monoposto and, most recently, the 1971 Le Mans-winning Porsche 917. The 330 P4 itself has already been race weathered at 1:18 scale and that edition, limited to 100 models, has sold out.

Considered by many to be one of the most exciting endurance races of all time, the 1967 Le Mans race pitted the Italian excellence of Ferrari against the corporate might of Ford for the second year in a row. Qualifying in seventh position, Ferrari were initially cautious, driving within their capability to last the distance. After the first round of pit stops, the Ford GT40 Mk IV driven by Dan Gurney and A.J. Foyt took the lead for the first time, maintaining a pace in the race which the Italians believed would be a fatal mistake. Unfortunately for Scarfiotti and Parkes, when finally given the signal to push, it was too late – the leading GT40 for was already five laps. Ford took the victory, but Ferrari salvaged pride with Scarfiotti and Parkes in second and the privateer 330 P4 entry of Willy Mairesse and Jean Blaton in third.

“The 330 P4 truly has a place in the heart of Ferrari” Copeman adds.: “It is reputed that until Enzo Ferrari’s death, he kept a photograph of the Daytona winning trio on their final lap to victory, so much did this result mean to him. Though it may not have emerged victorious at Le Mans that year, the 330 P4 withstood the commercial power of Ford’s GT40 programme and represented Ferrari magnificently. We feel immensely privileged to be collaborating on a such a project and are delighted that our model captures every aspect of the original so precisely.”