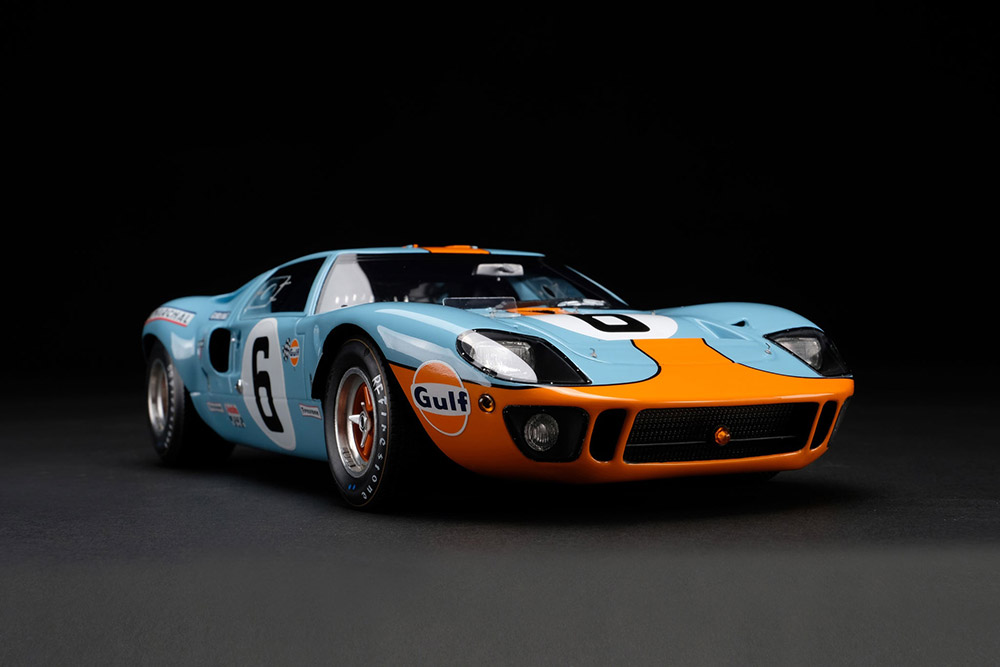 The artisans at Amalgam Collection today unveiled their latest project: the Ford GT40 at 1:18 scale. This new edition of perfect scale models precisely replicates chassis #1075, as raced at the 24 Hours of Le Mans in the hands of Jacky Ickx and Jackie Oliver on the 14th and 15th June 1969. The #6 John Wyer Automotive Engineering car, in its defining blue and orange Gulf Oil livery, took overall victory at Circuit de la Sarthe by just 120 metres (390 feet) after 24 hours of tough competition.

The first batch of models is now close to completion in Amalgam’s workshops, and the company are accepting orders for these models, with a view to deliver them to collectors around the end of October. Sandy Copeman, a founding partner of Amalgam, commented: “We are truly delighted to have the opportunity to create a reference level model at 1:18 scale of one of the most iconic cars of all time. The extraordinary amount of interest we have experienced since revealing the development of the 1:18 scale and its large 1:8 counterpart truly demonstrates just how idolised the GT40 and particularly chassis #1075 is.”

The 1:18 scale model follows the absurdly detailed GT40 model at 1:8 developed by the Bristol-based artisans. Development commenced using data supplied after scanning an original GT40, owned by a client of Amalgam. Copeman said “the 1:18 scale model necessitated over 800 hours of further development and only concluded once the experts at the Ford Archive and Heritage department were fully satisfied with the accuracy of representation.” The resulting models measure over 22 cms (8 inches) long and are crafted from precisely engineered parts of the finest quality. “The GT40 has undergone numerous alterations and modifications over the years, so we had to dig deep into photo archives and records to ensure that our model exactly replicates the car on the day it won at Le Mans in 1969. We would like to thank the Ford Archive and Heritage Department and Gulf Oil International for their assistance in realising this demanding project.”

The GT40 was born out of motorsport’s most infamous rivalries, as Henry Ford II enacted his desire to crush Ferrari at Le Mans. By 1969, Ford’s GT40 had won three years running but the favourite’s tag now belonged to Porsche, who had already wrapped up the World Sportscar Championship with three races still to go. 16 Porsches competed, more than a third of the field, and Porsche did indeed lead for 90% of the race. However, the leading 917’s gearbox broke at 11 a.m and the Ford of Ickx and Oliver took over the lead. The race ended in a 3-hour sprint, with the Ford battling exhaust problems whilst being pursued by the Porsche 908 of Hans Herrmann and Gérard Larrousse, who themselves contended with mechanical issues affecting the brakes and engine. Ickx held off Herrmann, cleverly faking fuel starvation then slipstreaming past the German before the end of the Mulsanne Straight, to cross the line first by just 120 metres (390 feet) after 372 laps. Even more impressively, #1075 was the exact chassis that won Le Mans the previous year in the hands of Pedro Rodriguez and Lucien Bianchi, becoming only the third chassis to win multiple editions of the prestigious endurance event. Only one car has managed this since.

The Ford GT40 at 1:18 scale is available to pre-order at www.amalgamcollection.com.