Amalgam in the UK celebrates one of the most iconic partnerships in motorsport history at a range of scales from 1:18 to 1:8. 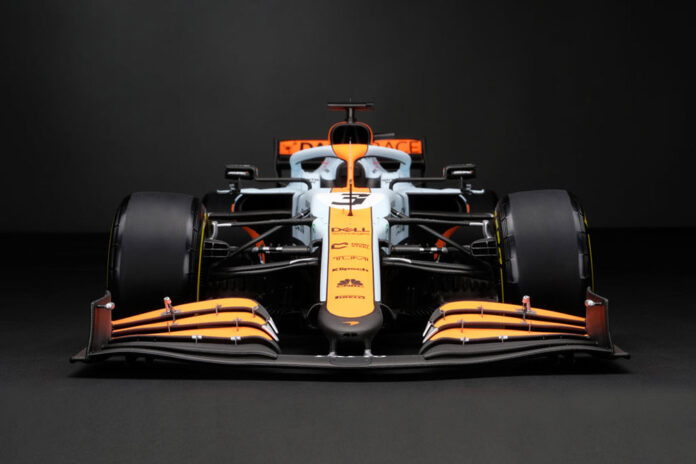 Amalgam Collection has released the first images of their latest Formula 1 project at 1:8 scale: the McLaren MCL35M. Dressed in a famous and evocative livery, this model precisely captures the car that reached the podium at the Formula 1 Grand Prix de Monaco 2021 in the hands of Lando Norris. The Gulf livery, one of the most recognisable and admired in the history of motor racing, celebrates the deep-rooted and successful racing partnership between McLaren Racing and Gulf Oil International.

Gulf’s link with McLaren started in 1968 and continued until the end of the 1973 season, with Gulf and McLaren enjoying success in both Formula 1 and the Can-Am series, in which the partnership won over 40 races. In the mid-90s the collaboration was renewed with the iconic McLaren F1 GTR running in Gulf colours at the Le Mans 24 Hours, and in global GT racing. The collaboration was revived again in July 2020 when McLaren announced the brand’s return as an official partner. The iconic blue with an orange stripe was a tribute to Gulf’s enduring brand value, while reflecting a racing connection that began in the days of team founder Bruce McLaren. “The passion and enthusiasm for the Gulf livery on the MCL35M has been clear from the moment we announced our intent to develop a collection of models” says Sandy Copeman, one of the founding partners of Amalgam Collection. “Demand has been huge from McLaren and collectors alike.”

Amalgam’s model at 1:8 scale precisely captures every detail and aerodynamic aspect of the MCL35M and its iconic Gulf livery. Working from CAD data supplied directly by McLaren, Amalgam’s engineers developed a prototype, meticulously interpreting the data to ensure that the details were accurately brought to life in miniature. Master patterns were created for each piece of the complex assembly, using 3D printing followed by meticulous hand finishing. Moulds were then taken from each pattern and used to create a small batch of cast components, each one fettled and fitted to make a complete set, before painting finishing and assembly. The edition of MCL35M, strictly limited to 50 pieces of each driver livery, necessitated over 2500 hours of development and the resulting prototype only received the approval of the McLaren designers and engineers once they were fully satisfied with its accuracy of representation. Measuring over 71 centimetres (28 inches) long, each subsequent model took 250 hours to cast, fit, fettle, paint and assemble, as Amalgam’s team of artisans focused on ensuring that every minute detail was accurately captured.

Norris’ podium was just one of the highlights for the McLaren during the 2021 Formula 1 season. The British driver also claimed third place in Imola and Austria, bringing his tally to five podiums for the team. “It has been fantastic to see McLaren back at the front, battling for podiums regularly during the last couple of seasons” continues Copeman. “Seeing them contest with Ferrari is a refreshing continuation many historic Formula 1 battles.” McLaren’s highlight of the season was undoubtably the Italian Grand Prix, where Daniel Ricciardo led Norris past the chequered flag for the team’s first win since the 2012 Brazilian Grand Prix, and their first one-two finish since the 2010 Canadian Grand Prix.

The model engineers at Amalgam have also developed a 1:8 scale edition of that Monza-winning car, and the sample model has recently been met with approval by the design and engineering teams at McLaren. Limited to just 50 pieces, Amalgam is now accepting deposits on these models, with a view to delivering the first batches in the summer.

Completing the MCL35M Collection is a 1:18 scale version of the Monaco car, along with a 1:12 scale replica of the car’s nosecone as raced at the Emilia Romagna Grand Prix. The 27cm (10 inches) long edition of 1:18 scale models is limited to just 500 pieces, and required over 800 hours of development time. Each model is delivered with a booklet designed by McLaren Racing’s design team. The booklet adds a powerful piece of visual design DNA and insight from the heart of the McLaren Racing design team.

Each nosecone replica measures 16 centimetres (6 inches) wide, features a certificate of authenticity and is entirely removeable from its mounting frame, itself inspired by the real garage storage racks in the Formula 1 pit line.

“Our full collection pays tribute to the success of McLaren during the 2021 season” says Copeman. “Having made such progress from their self-confessed poor performances a few years ago, we’re hoping McLaren continues this trajectory into the 2022 season.”