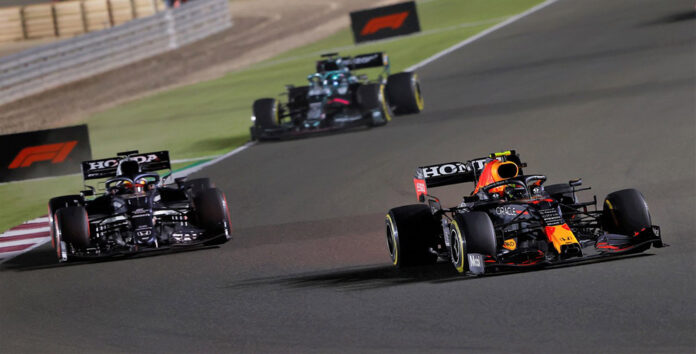 Verstappen started seventh after incurring a five-place grid penalty for failing to heed a double-yellow flag in Saturday’s final qualifying round. The Formula One World Championship leader made up three places at the start and needed just four laps to climb into second, where he would spend the remainder of the evening, earning his 16th podium finish of the season.

Sergio Perez fought off the effects of a tough qualifying session that left him 11th on the grid and powered through the field to finish fourth. The Mexican driver made up two positions at the start and had made his way to fifth after 13 laps, leading into the first round of pit stop.

The pit-stop strategy and the rough curbs of the Losail circuit ramped up the intrigue over the final laps, as those that tried to go the distance on a single stop began to suffer tire issues. Four drivers got flat tires in trying to stretch to the end after their lone stop, with the last of those preventing Perez from making a run at a double podium.

Perez trailed Fernando Alonso by nine seconds with five laps to go, with Alonso watching his fellow single-stoppers fall by the wayside. But the challenge never materialized as Nicholas Latifi’s flat left him stranded off course, bringing out a Virtual Safety Car with the three laps to run, dooming Perez to a fourth-place finish.

The Scuderia AlphaTauri duo had strong starting positions scuttled by traffic as both drivers finished out of the points. Pierre Gasly started on the front row for the first time in his F1® career but fell into traffic after his first stop and finished 11th. Yuki Tsunoda started eighth but also could not escape traffic and finished 15th.

Verstappen wrested the fastest lap of the race from racewinner Lewis Hamilton to key a two-point swing that gave him an eight-point lead in the championship with two races left in the 2021 campaign. Red Bull Racing closed the gap to Mercedes for the lead in the Constructors’ Championship, and trails by just five points heading to the year’s penultimate race, which will take place in Saudi Arabia on December 5.

Toyoharu Tanabe
Technical Director, Honda F1
The first ever Qatar Grand Prix turned out to be an exciting race for us, with both Red Bull Racing Honda drivers doing a lot of overtaking. Max, who had an unfortunate grid penalty, immediately moved up the order to get up to second place quite quickly and finish on the podium, while Checo also produced a strong drive to go from eleventh to fourth. Today, we really got everything out of our package. Things did not go so well for Scuderia AlphaTauri Honda. Pierre inherited a front row grid position because of penalties for others, but neither he nor Yuki, who started eighth, had enough race pace today and finished outside the points. In general, this was not an easy weekend for us, but the result was important, as Max still leads the Drivers’ classification and Red Bull has closed the gap to Mercedes in the Constructors.’ Now, we have a one-week gap without a race, so we will work hard to improve our performance for the final two races of the season. Finally, congratulations to our former Honda colleague Fernando Alonso on his podium finish. He drove a great race.”

Max Verstappen – Red Bull Racing Honda
Start 7th, Finish: 2nd
“I’m of course happy with the result today. This weekend has been quite difficult for us as a Team and we are still lacking pace, I tried everything I could after the five-place grid penalty so to finish in second and score the fastest lap is really good. I had an exciting start and I knew that the first few laps were really important, I had a good launch and I was fairly quickly back in to second place, from there I tried to keep the gap small and that worked out quite well. I had fun today, especially when going for the fastest lap. It’s a shame that Checo didn’t make it to the podium today, he scored good points for the Team. I’m also happy for Fernando, we all know how good he is, there’s no doubt about that. For now, we need to stay focused, there are still two races left to go and a lot of things can happen, anything is possible.

Sergio Perez – Red Bull Racing Honda
Start: 11th, Finish: 4th
“We managed to recover from qualifying and moved through the grid quickly from P11, we were in a very good position to be on the podium but unfortunately it didn’t work out. It was a very exhausting race, I was flat out the whole time, overtaking and pushing. We were changing our strategy throughout the race; we had to protect our tires to prevent getting a puncture and maximize our position in the Constructor’s Championship. I think we had the podium in our pocket but for the second week running a virtual safety car has potentially cost us. I don’t know if without it we would have definitely caught up with Fernando, but we would have been close.. Where we have finished today is a good result for the Team and the longer-term picture, we just have to keep pushing hard and improve our performance in the next two races. Now I am looking forward to Saudi Arabia and Abu Dhabi because we are going to give it everything, we have a big chance to come on top of the Constructor’s Championship, there is five points in it, it’s all to play for and that is the target.”

Pierre Gasly – Scuderia AlphaTauri Honda
Start: 2nd, Finish: 11th
“It’s a really frustrating day. Both Yuki and myself started in the top 10, but went massively backwards during the race. I was giving everything I had inside the car today, but we were just too slow. Even at the start I wasn’t able to stick with Alonso, so we tried to go for an aggressive two stop strategy, but the pace just wasn’t there. It didn’t work today, which is really disappointing. After the incident yesterday we changed some parts on the car, I don’t know if these could have impacted our race pace today, but we’ll have to go away and review everything, as I just can’t explain it right now. ”

Yuki Tsunoda – Scuderia AlphaTauri Honda
Start: 8th, Finish: 13th
“That was a particularly tough race, I struggled a lot on the soft tire, especially in the first stint. We really weren’t expecting that, as overall this week we’ve had really good pace, but today in the race it dropped off, so we’ve got to look at the data and figure out why that was. It’s a real shame, as Alpine had a very good race today, so we need a strong comeback for the last two races. “