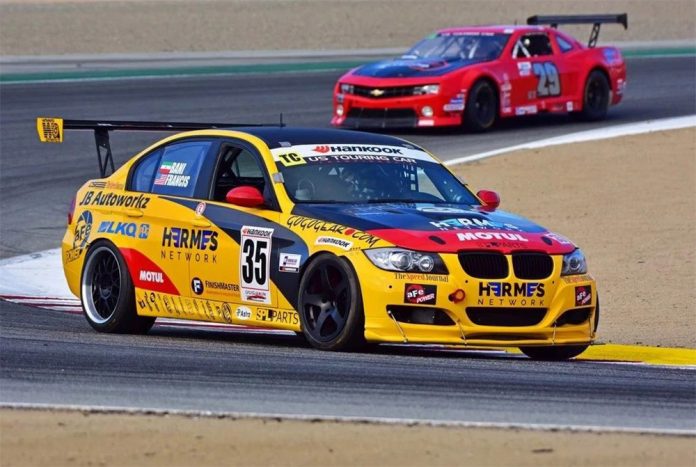 Visitors to this year’s September Laguna Seca IndyCar race weekend were treated to not one, but two shows. While the stars of IndyCar open wheel racing headlined the competition, the US Touring Car Championship (USTCC) raced two rounds of its championship as well. So the thousands of spectators who lined the fences witnessed 30+ USTCC cars slicing their way up, down, and around the golden hills. 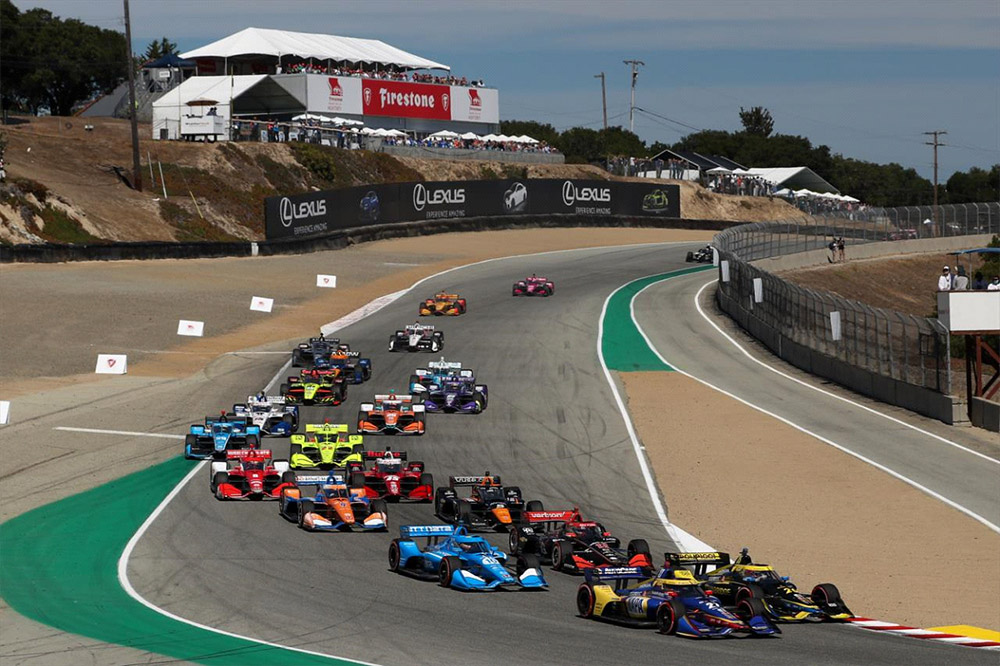 As racing fans know, Laguna Seca Raceway is one of the most well-known road courses in the world. The 2.238 mile ribbon of asphalt is a historic natural terrain road course. Laguna Seca translates in Spanish to “dry lake,” which is a nod to the dry lakebed in the center of the track around which the track and grounds are arranged.

The Speed Journal sent Principal Jeff Francis for a guest appearance in the USTCC, sharing time in a BMW with past USTCC Champion Larry Bani. The series is positioned as professional racing, but at an affordable price point. In a stark contrast to the wings, carbon fiber, electronics, and shiny transporters in the IndyCar paddock, the USTCC series features road-based racers such as BMW 3-series, Ford Mustangs, and Hyundai Genesis, with a scattering of Chevrolet Camaros & Corvettes, Mazda MX-5s, Acura RSXs, VW Jettas and Audi R8s for variety. 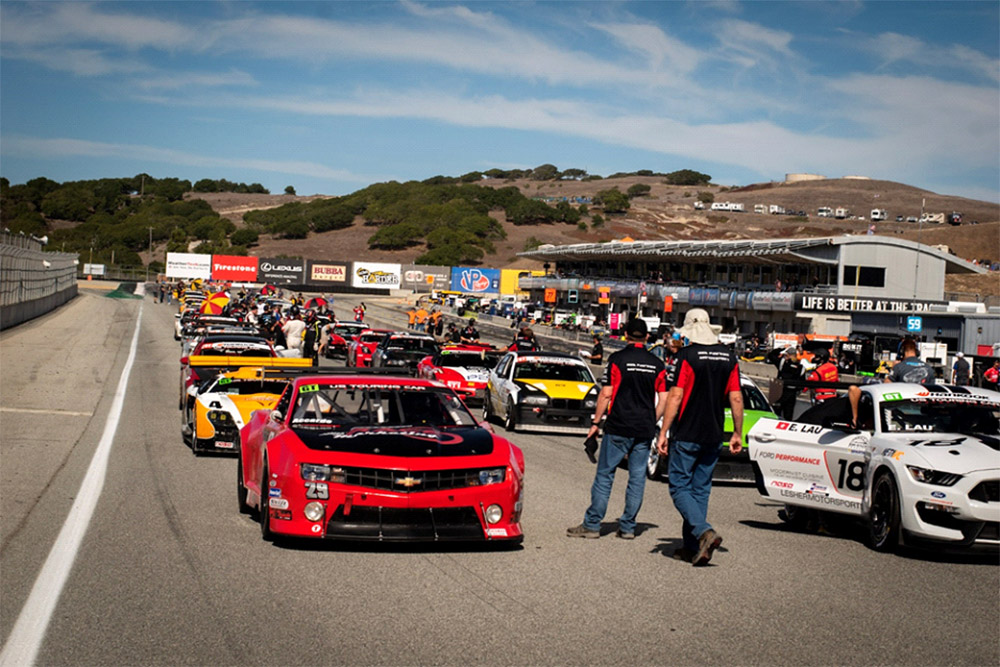 The appearance was not Francis’ debut with the USTCC. To read more about a prior USTCC outing at Laguna Seca Raceway in 2017, click here: https://www.thespeedjournal.com/united-states-touring-car-championship/ The lure of competitive racing at a high level spectator event was the perfect formula for a return visit. The simple weekend format includes two 45 minute races preceded by practice and qualifying. 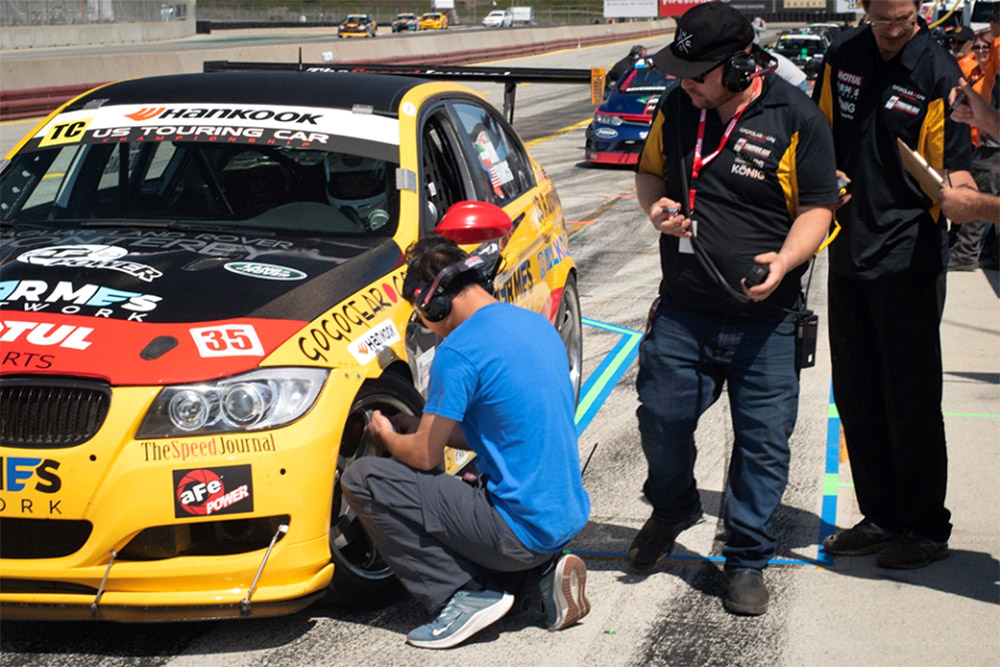 USTCC fits neatly in the massive gap between club racing and big-budget factory professional racing. Managing Director Ali Arsham traces USTCC roots back to his love of European touring car racing – namely race cars based on street cars, with reasonable power from smaller engines, and close racing. While Arsham had done club racing, he was looking for something more. The series kicked off in 2000 and has been a haven for all kinds of drivers with serious racing aspirations and credentials. 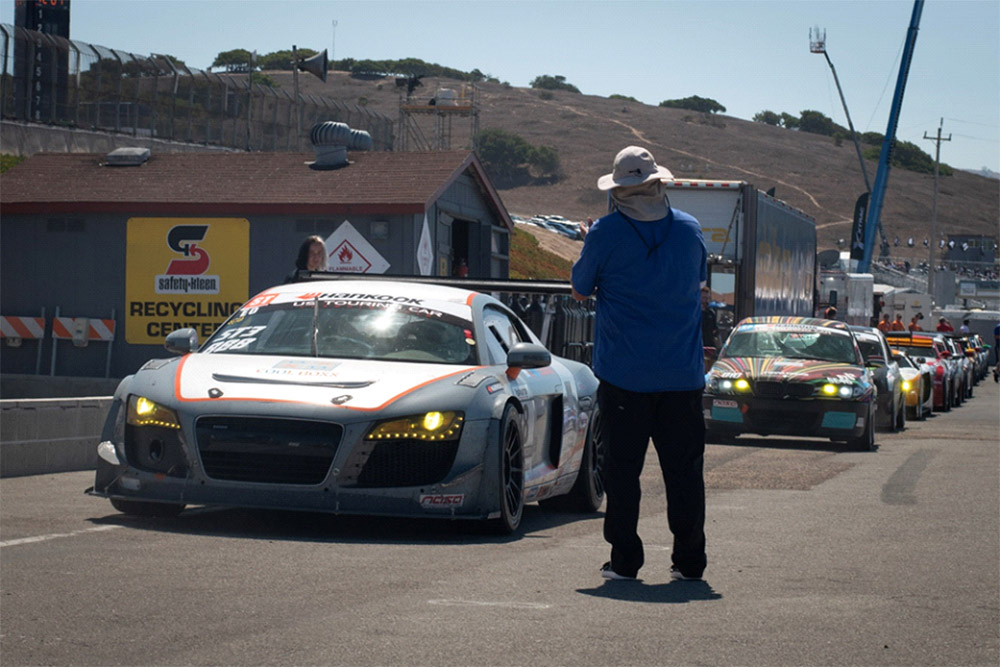 Somewhere between 15 and 20 cars race the full season. Venues vary from year to year, but the USTCC runs a schedule with events at most of the well-known tracks in the western United States such as Sonoma, Buttonwillow, Fontana, Las Vegas and Thunderhill. Throughout the season, the fields grow at some stops as individual drivers make one-off appearances or run a partial schedule as their personal calendars and budgets permit. Events such as the USTCC Laguna Seca weekend can exceed 30 entries. 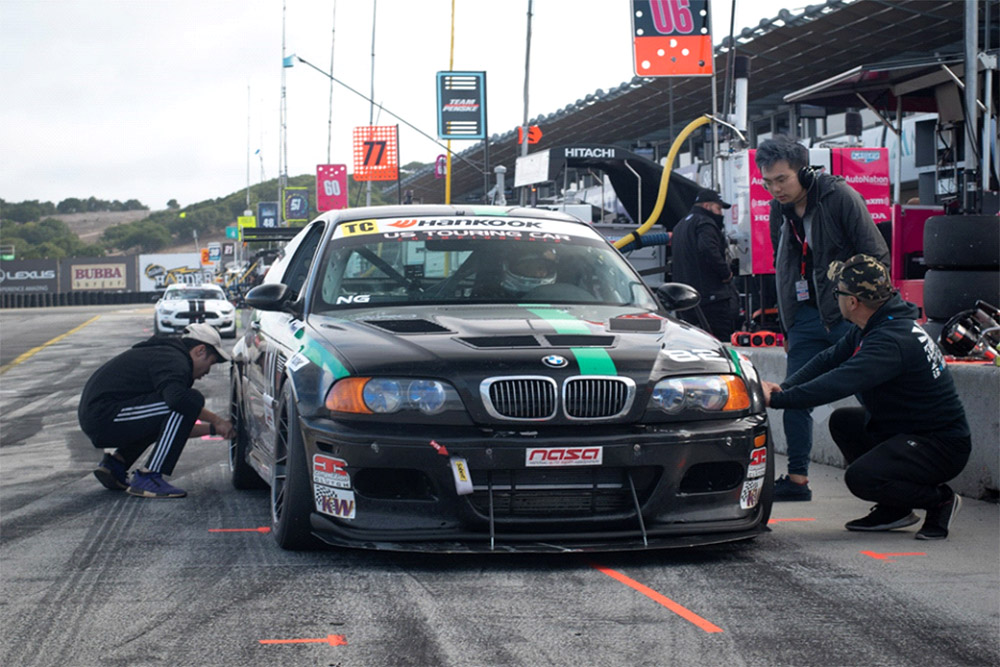 The original USTCC vision targeted a single class of race cars that looked like road cars with colorful visuals, some aerodynamic tweaks and small-sized engines with no more than six cylinders. Having operated for over two decades, it maintained a durable appeal by sprouting additional classes for a broad base of racers to find a home with USTCC. 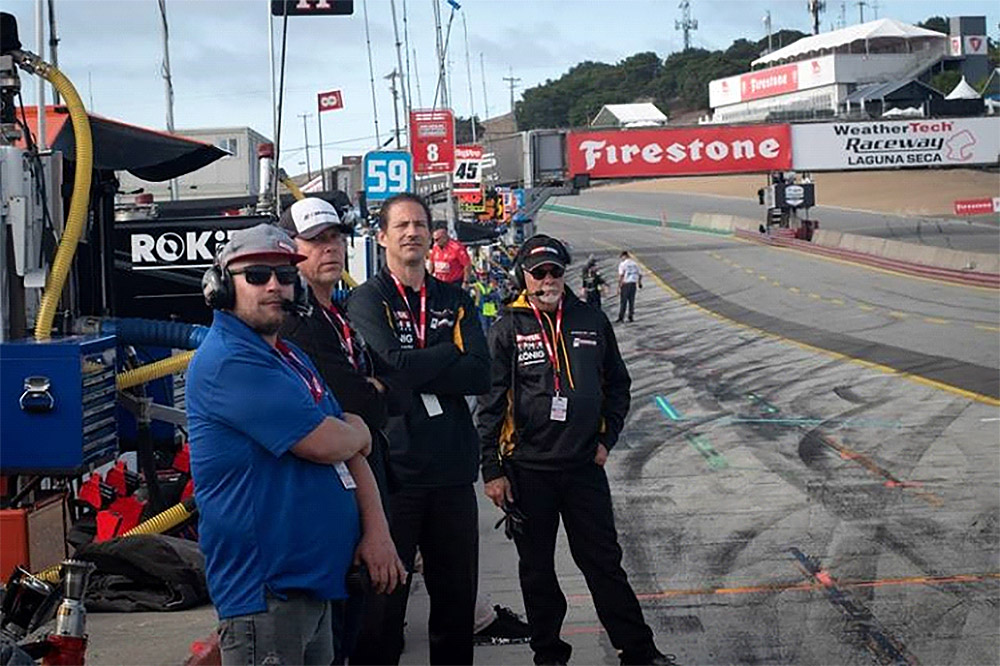 Camaraderie in the paddock area is strong for the tightly-knit group. The racing is close but not cutthroat and a mutual agreement for how to race permeates the track action. A damaged car warrants sympathy and assistance rather than delight in the misfortune. 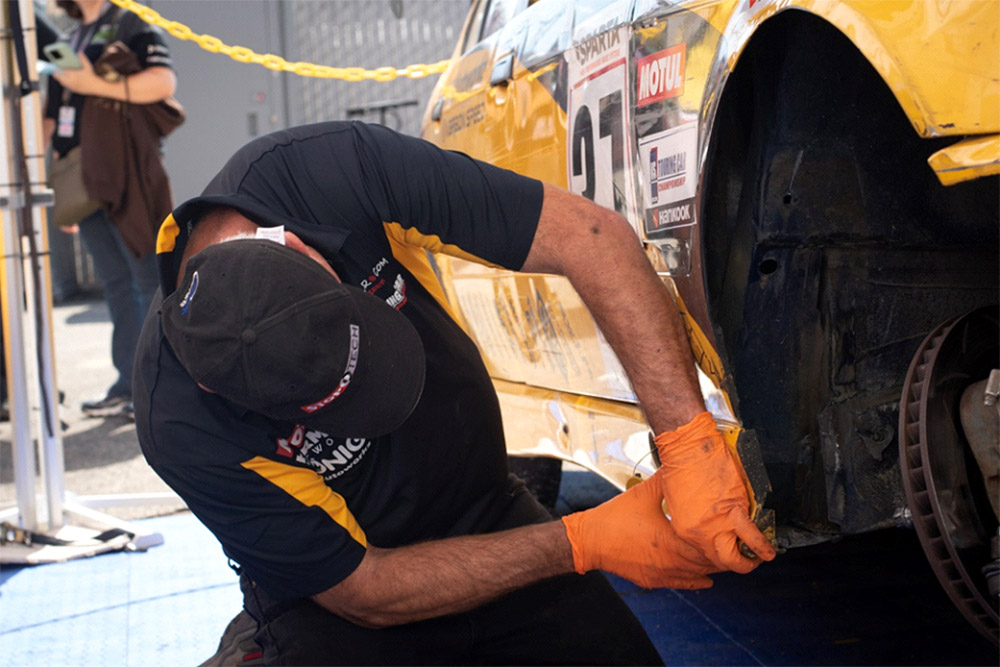 The series appeals to different drivers for different reasons. Some look to enjoy a regular schedule of budget-friendly close racing at great tracks. Others look to grow and appreciate the opportunity to learn. Some are drivers who raced seriously in the past but took other paths as budgets, life priorities or age played a factor and now appreciate the opportunity to scratch their racing itch. 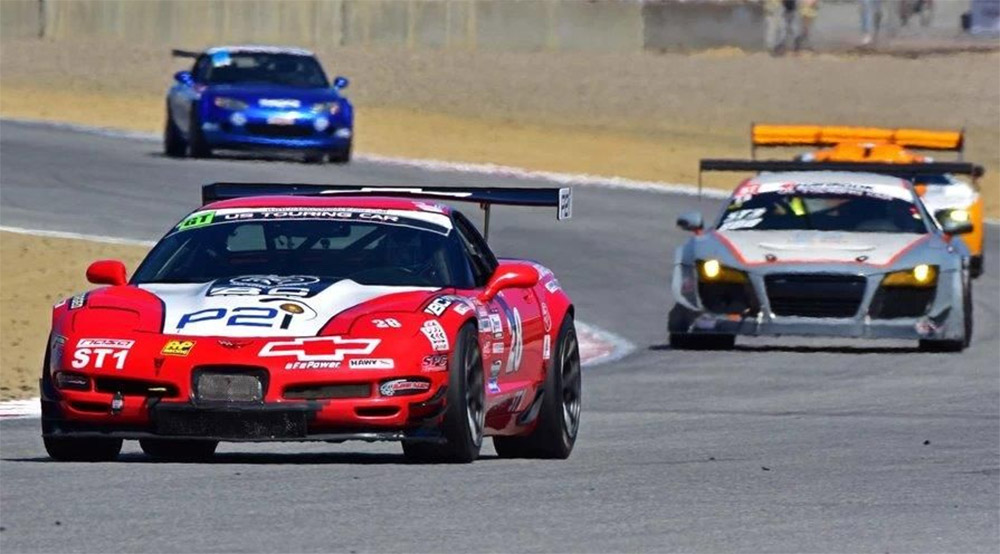 A Friday night USTCC paddock potluck with fellow racers and crew broke through the intensity of the weekend and gave drivers a chance to take a breath, catch up with friends and make new friends. Drivers traded stories from the day about crossing paths with racing royalty amongst the IndyCar teams such as Mario Andretti and Romain Grosjean around the Laguna Seca grounds, proving that even experienced veterans still are awed by their racing heroes. 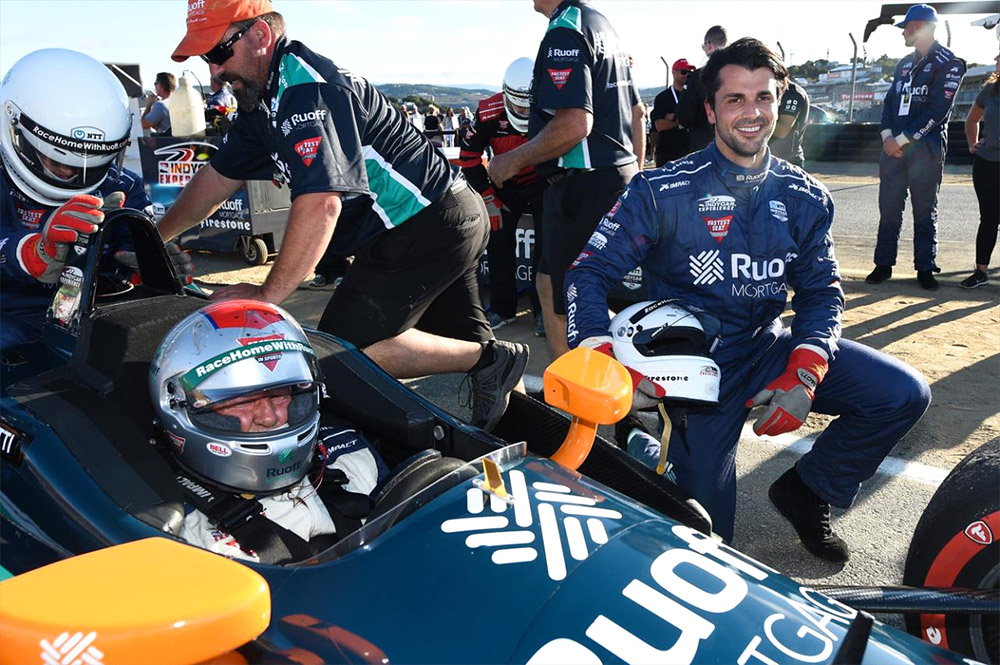 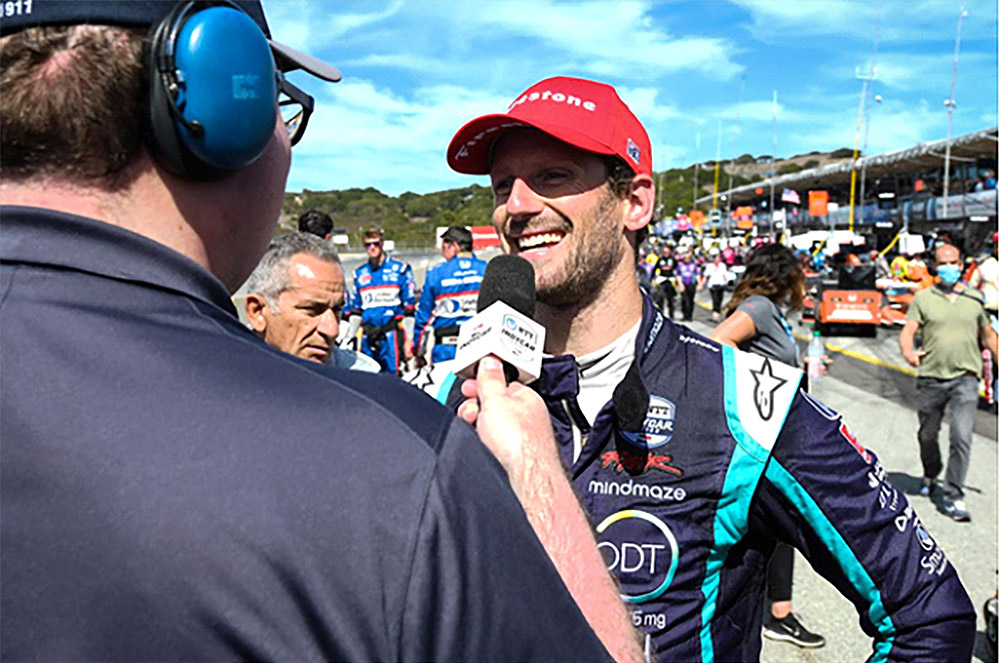 USTCC fans know that Borders races the only Factory 5 GTM prototype in the field. As the series includes a wide variety of cars across four classes, Borders’ GTM slots in the GT class. Even among a track full of race cars, the exotic GTM cuts a distinctive silhouette through the air. All GTMs (which stands for Grand Touring Mid-engine) start life as a kit, most utilizing an LS3 General Motors small block V-8 engine and Corvette suspension. While Borders’ car has been an ongoing development project, he has piloted it for many years, miles and wins. During the Laguna Seca Raceway weekend, Borders picked up a pair of 3rd place class podium finishes in his yellow and white GTM. 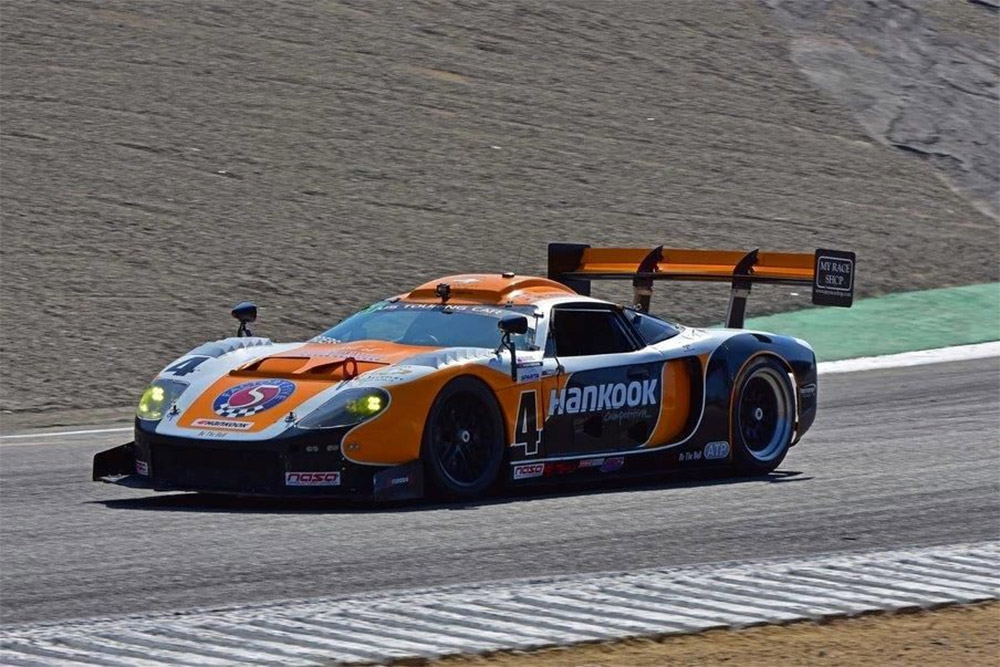 For the USTCC teams and drivers, being a part of the IndyCar weekend energy was electric. Over the course of the three days, participants from both series passed each other on the way to or exiting the track. The IndyCar crews acknowledged their racing counterparts with thumbs up and knowing nods. There was a sense of occasion, heightened by hearing the wail of the IndyCar V6 twin turbo engines echo across the grounds, seeing the open-wheel racers use their giant wings and wide slick racing tires to cut through corners, watching professional crews with matching clothing and highly prepared equipment, and listening to the public address announcers call the action. 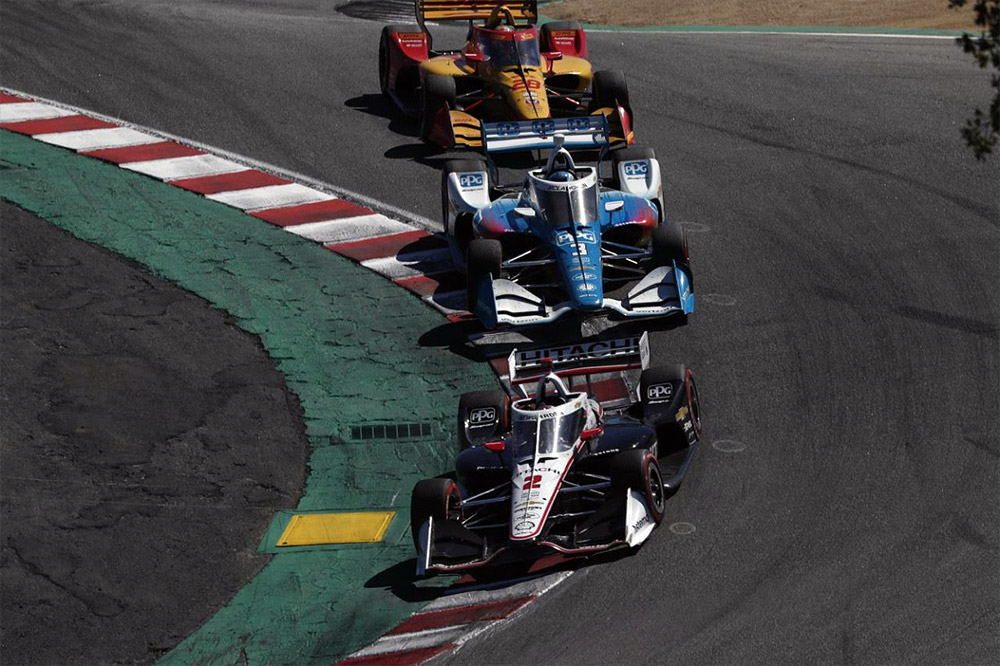 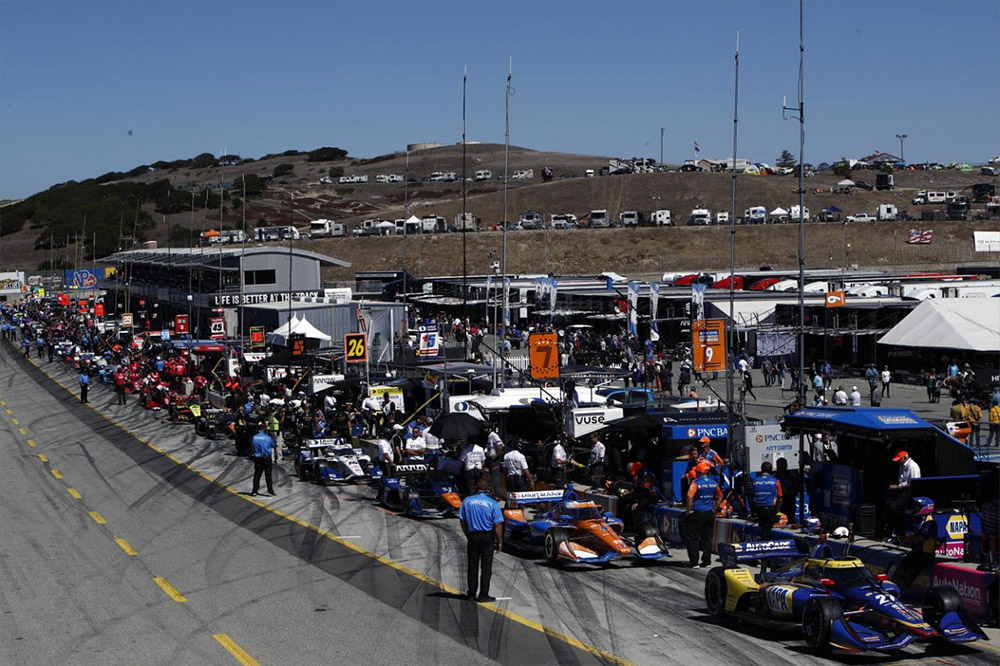 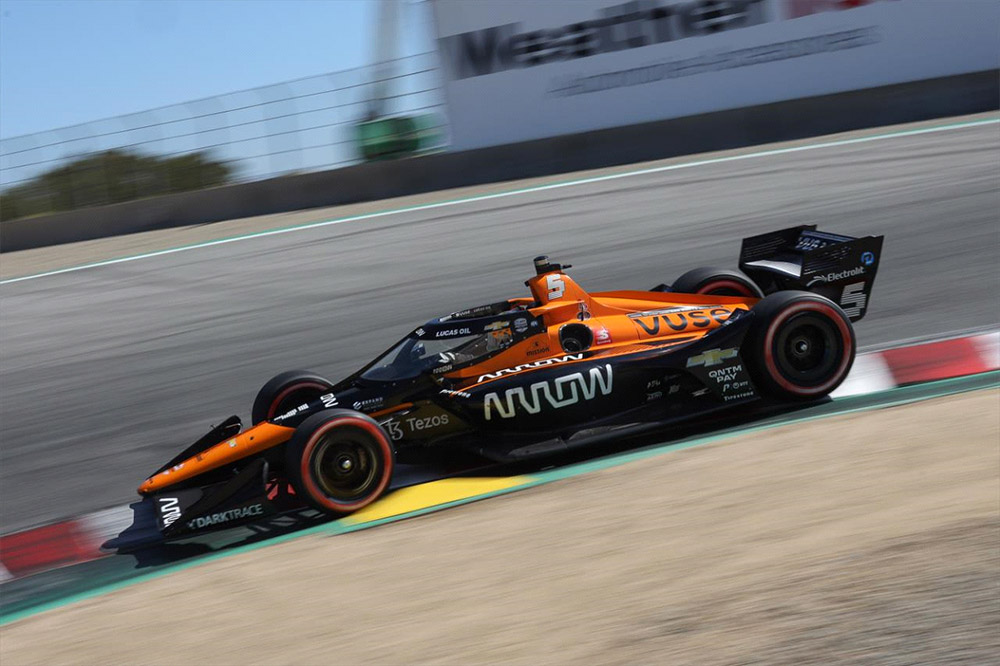 The eyes of the racing world were on Laguna Seca Raceway for the weekend. People and team names that are usually only seen on television coverage moved throughout the paddock. Additionally, team management such as Zak Brown were on site. Brown, CEO of McLaren racing and involved with the Arrow McLaren IndyCar team, worked out of a 1972 Ford Condor motorhome. He picked up the motorhome in an on-line auction after learning the vehicle was used for trackside support by McLaren racing in the 1970s. You could see McLaren staff escort occasional visitors to and from the motorhome throughout the weekend. 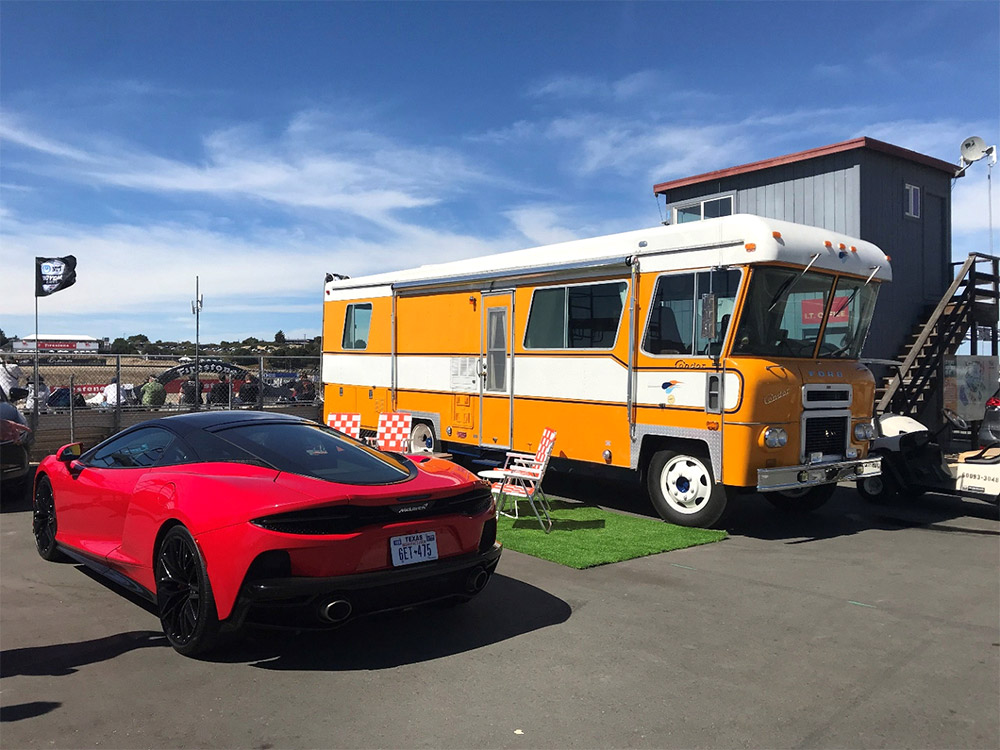 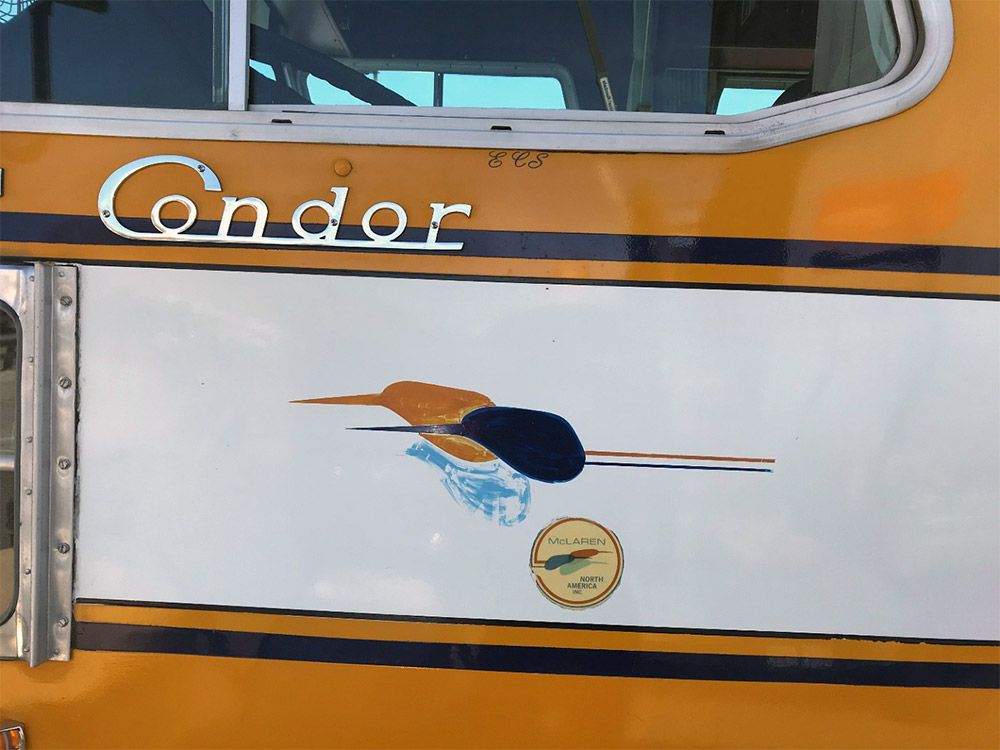 Fans had up close access to the USTCC paddock, permitting them to talk with the crews and drivers, and snap photos. The series also organized popular autograph sessions. Drivers posed for photos and signed autograph cards, event programs, and posters. 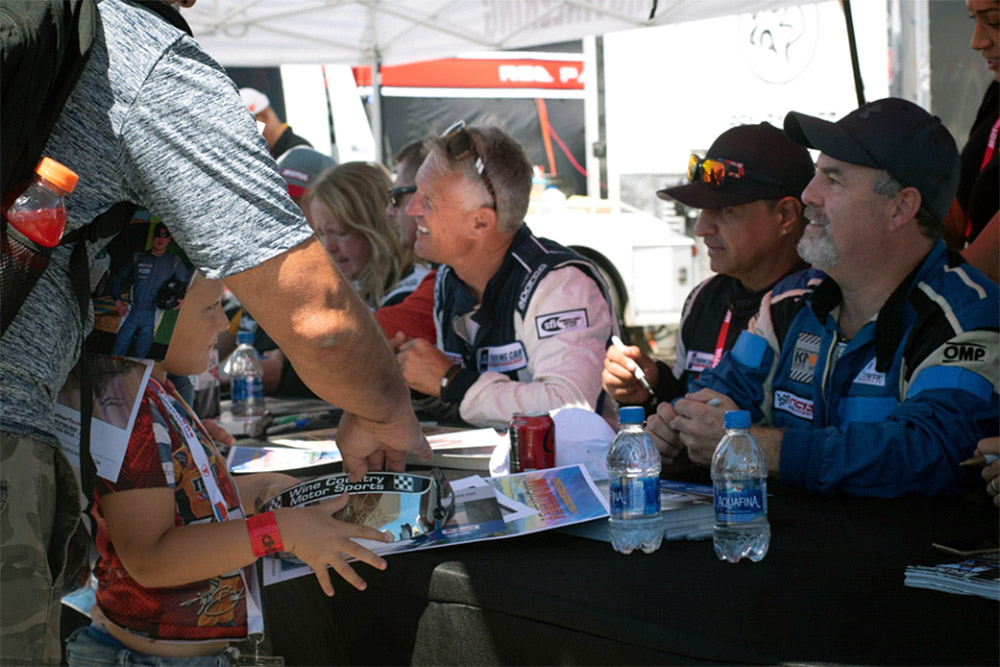 The USTCC grid embraced the high-profile event with standing starts which are always exciting. An open grid for families, friends and spectators with credentials enhanced the moment for all involved, providing for lots of smiles and photographs as drivers stole glances at their competitors. 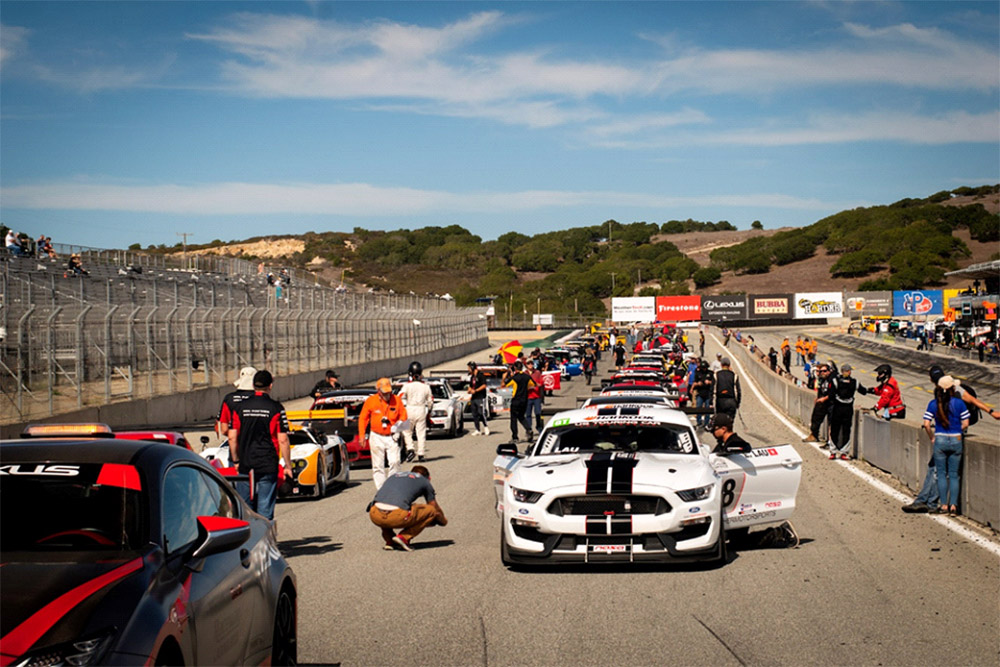 Francis and Bani worked out of the GoGoRacing stable which was supporting a gaggle of BMW, Honda and Hyundai entries, all with distinctive bright yellow liveries. The duo’s #35 2012 BMW M3 ran with support from Jaguar-Land Rover Monterey, with series tire sponsor Hankook’s logo stretched across the top of the windshield, matching the actual tires anchoring the BMW to the track. 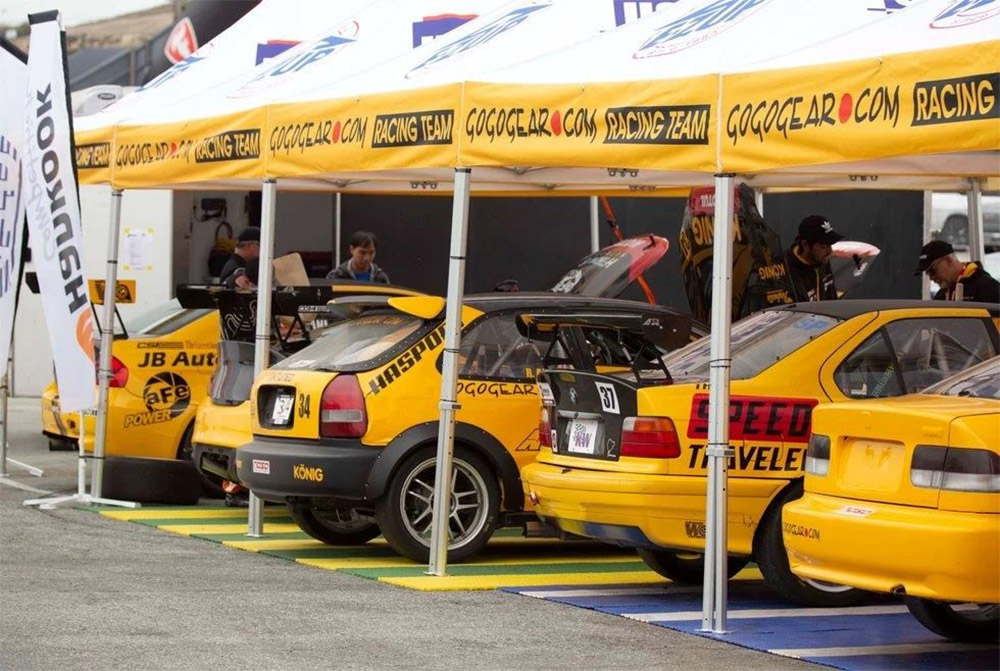 On Sunday, many fans stayed after the IndyCar feature to take in the USTCC event. Despite a full field of cars that hurtled down into the tight left turn after the standing start, the Sunday event got away to a clean start. Multiple classes made for various races within the overall race, and the quality of the field in terms of both drivers and car preparation made each pass a small victory. 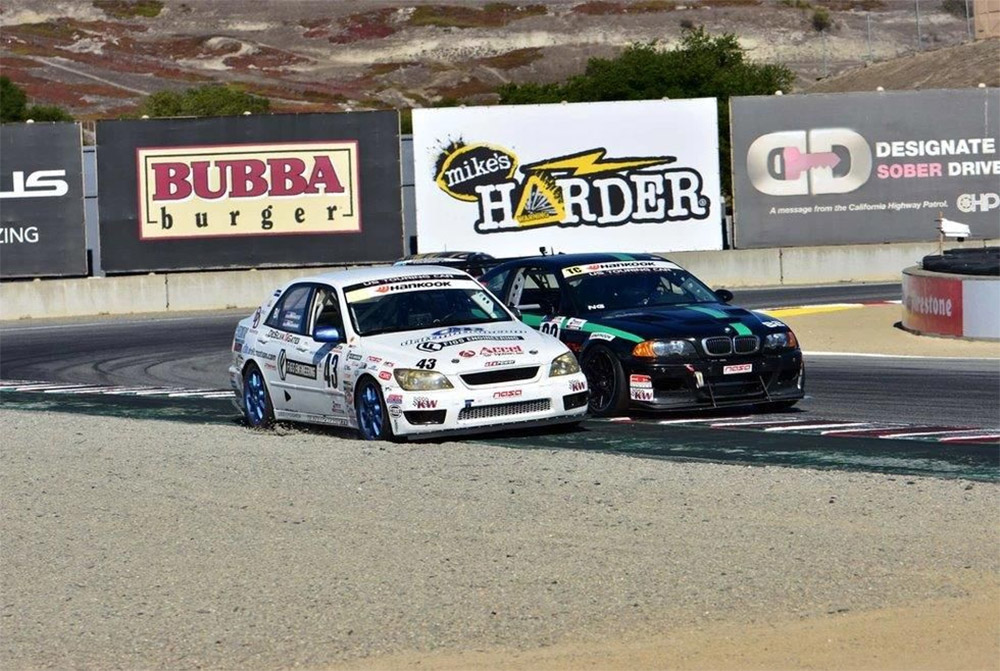 For the driver who wants a more traditional racing experience – manual transmission, no anti-lock brakes or traction control, minimal aerodynamic influence from wings and bodywork bits – the USTCC is worth considering. Teams such as GoGoRacing organize arrive-and-drive weekends. Even series director Arsham, who no longer races full seasons, got behind the wheel of a GoGoRacing Hyundai during the Saturday race. This was just one of a handful of racing weekends he drives while also balancing his USTCC organizing duties. The passion is still there. 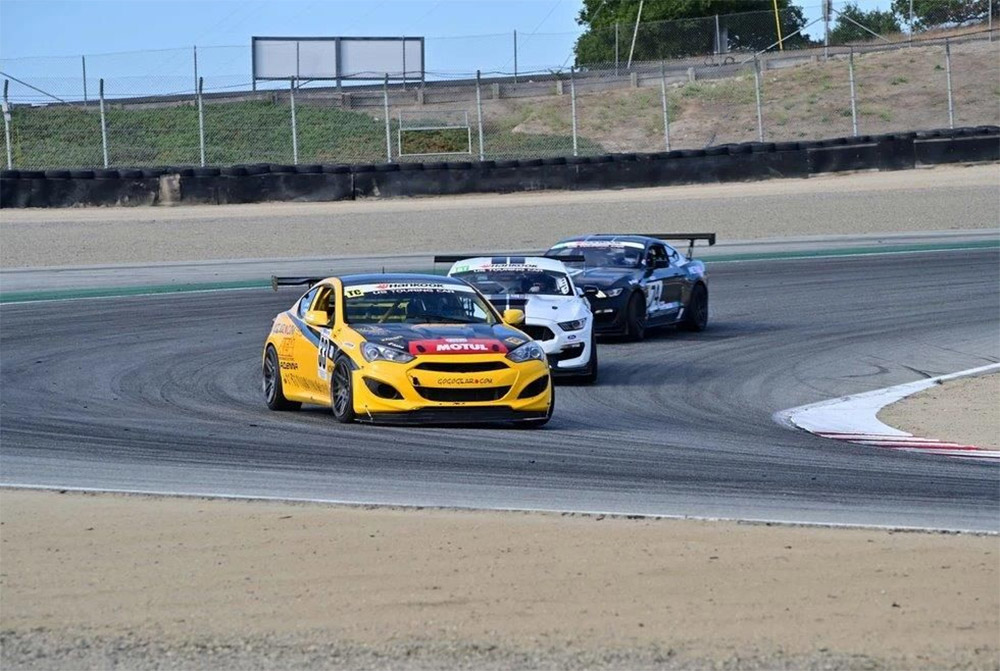 As with any series, sponsors are an essential part of the process, boosting the profile of USTCC and its drivers. In addition to tire sponsor Hankook, a wide range of commercial partners have a home with USTCC. GoGoGear specializes in vehicle wraps, banners and clothing. ATP Electronics makes memory cards and computer hard drives. Specialty Products Company provides products and training for vehicle alignment professionals. Victor Racing makes static and active aero bits for high performance cars – a perfect fit as USTCC is one of the few series that allows active aero technology. These sponsors and others not only leverage their USTCC relationship to help their business but their support allows USTCC to keep the series going and award prize money to top race finishers. 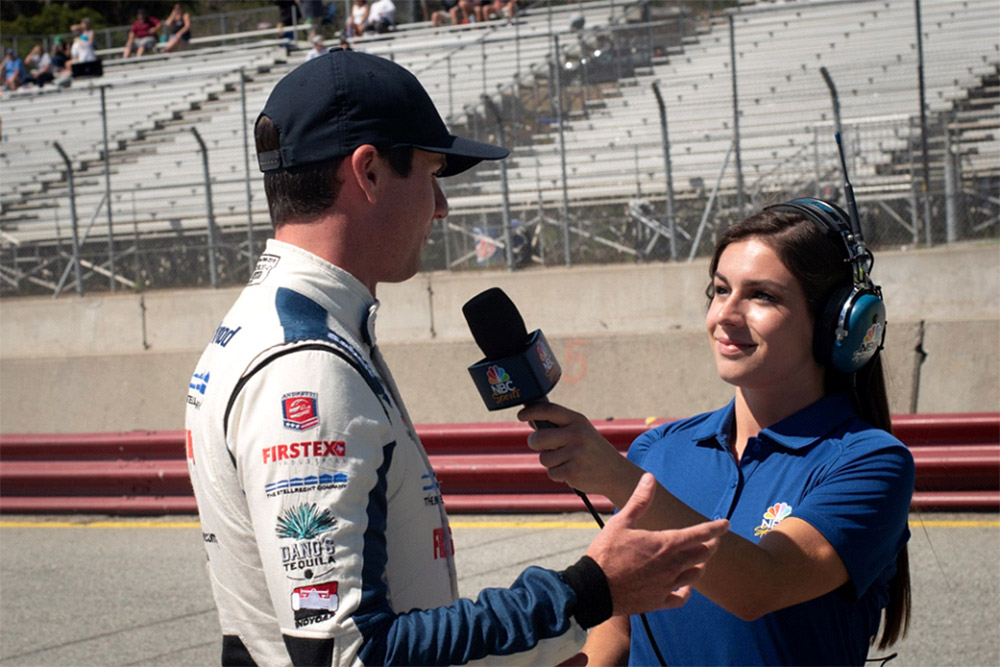 Having built enough credibility to partner with larger racing series such as Indycar affords USTCC greater visibility. USTCC has its own coverage deal where the races are shown on a delayed basis on NBC Sports and FinalDrive online. 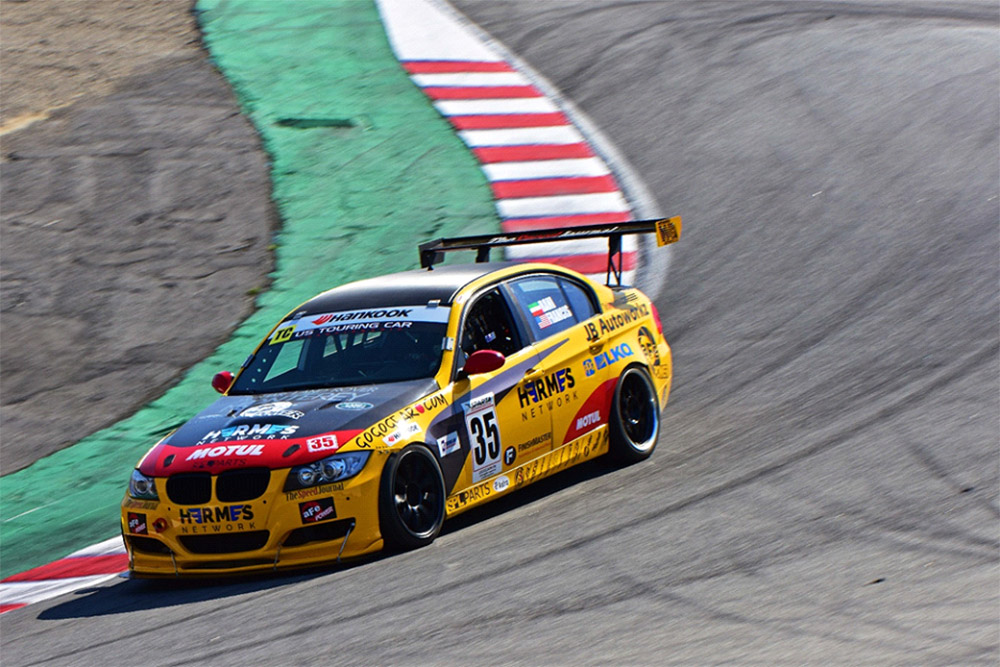 The Speed Journal is all about driving experiences and occasional race weekends like the USTCC round at Laguna Seca. The Speed Journal would like to thank the USTCC organization for the invitation and for hosting a professional and exciting race event. 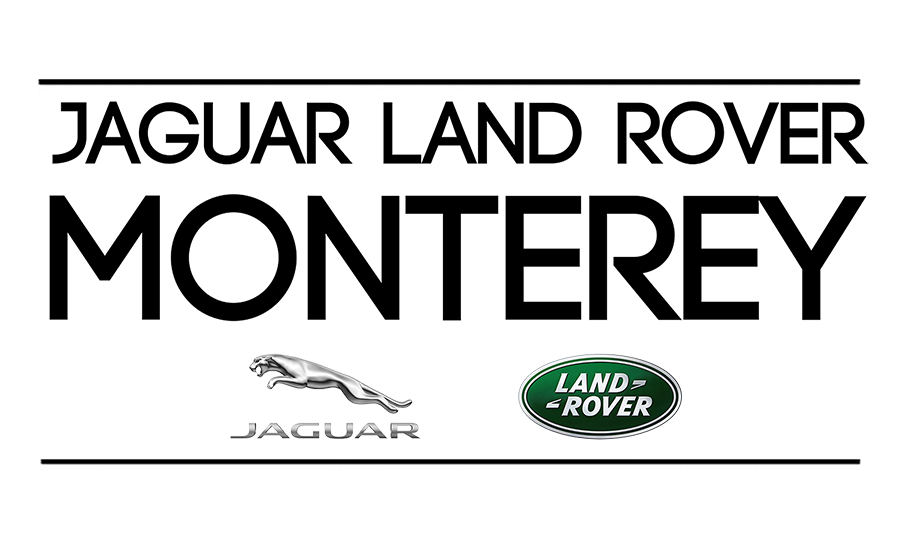