If you want to go racing, you don’t need an open wheeled purpose built single seater missile with wide tires and a big rear wing and a pit crew to keep it running. You don’t even need a pricey Porsche, Ferrari or Corvette. Head to the track with the Un … 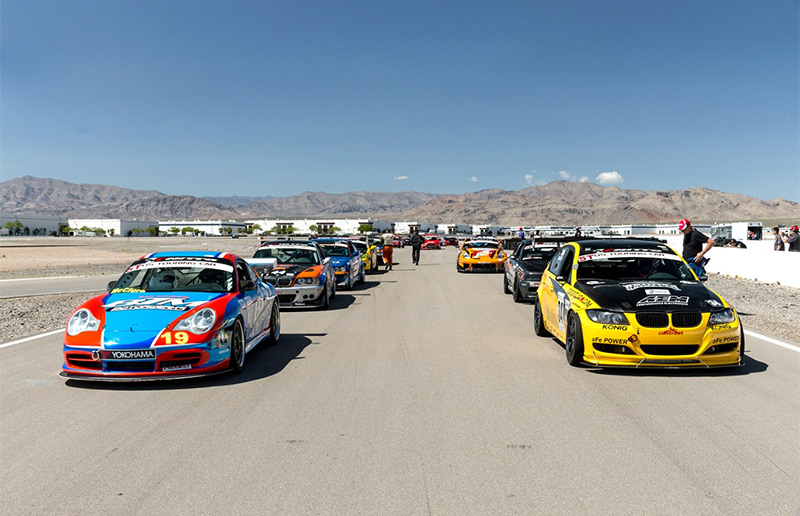 If you want to go racing, you don’t need an open wheeled purpose built single seater missile with wide tires and a big rear wing and a pit crew to keep it running. You don’t even need a pricey Porsche, Ferrari or Corvette. Head to the track with the United States Touring Car Championship (USTCC) and run with a group comprised of marques like BMW, Honda, Acura, Hyundai, Nissan and Mazda. 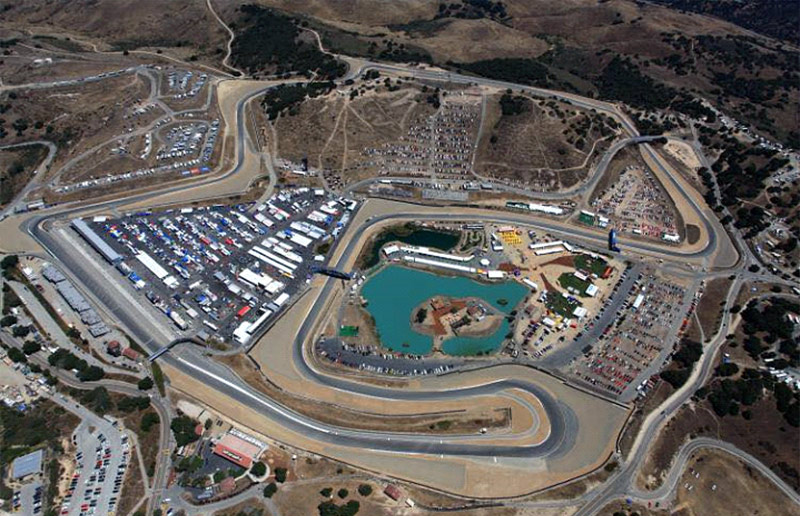 To find out more, Jeff Francis took The Speed Journal to a recent round at Mazda Raceway Laguna Seca. Francis ran a BMW M3 for Team GoGoGear.com in the SP class. He experienced the USTCC group first hand on and off the track, had a great time and mixed it up with plenty of competitive racing. 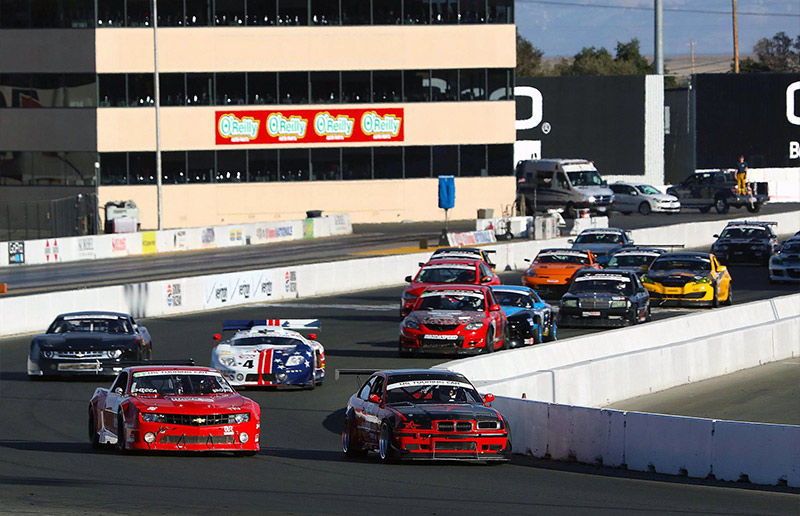 The USTCC has been around for over a decade and focuses on natural terrain road courses in California. Sonoma Raceway, Mazda Raceway Laguna Seca, and Thunderhill provide the foundation for an annual calendar that typically spans six races. Venues vary from year to year, so stops at Buttonwillow, Auto Club Speedway in Fontana, Miller Motorsports Park in Utah, and Las Vegas Speedway host the USTCC party from time to time. 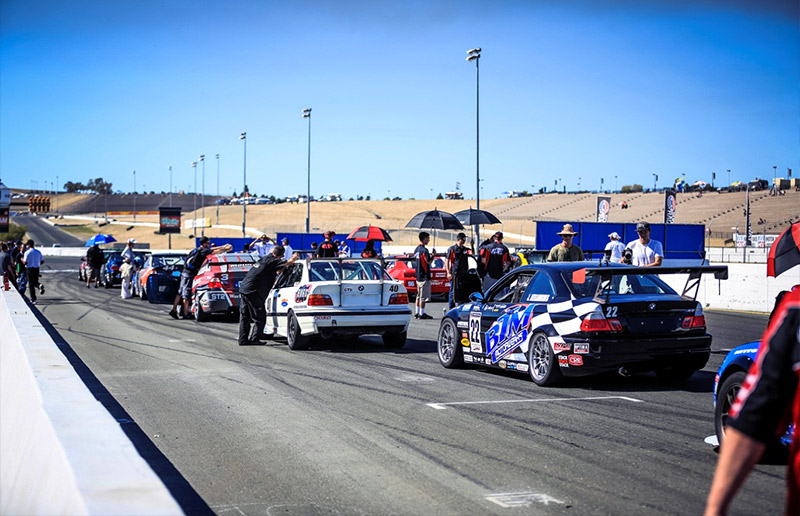 Race entries are spread across four classes. The variety of cars and tracks mixes things up for the drivers and keeps it fun. USTCC ensures there is plenty of track time throughout a weekend. Races are typically a 45 minute sprint. Enduros are not a standard feature but the schedule has included a 2-hour race in the past. 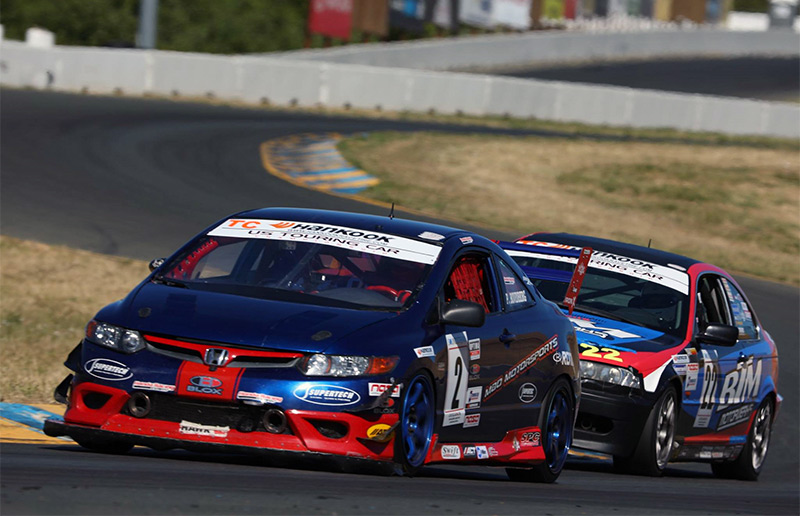 While the cars are not purpose-built racecars, they are race prepared and track focused. The rulebook sets guidelines to provide some flexibility but avoid the cost escalator that pure spec racing or unlimited “anything goes” racing can produce. A key feature of that approach is to facilitate a welcoming environment for sponsorship and manufacturer support. 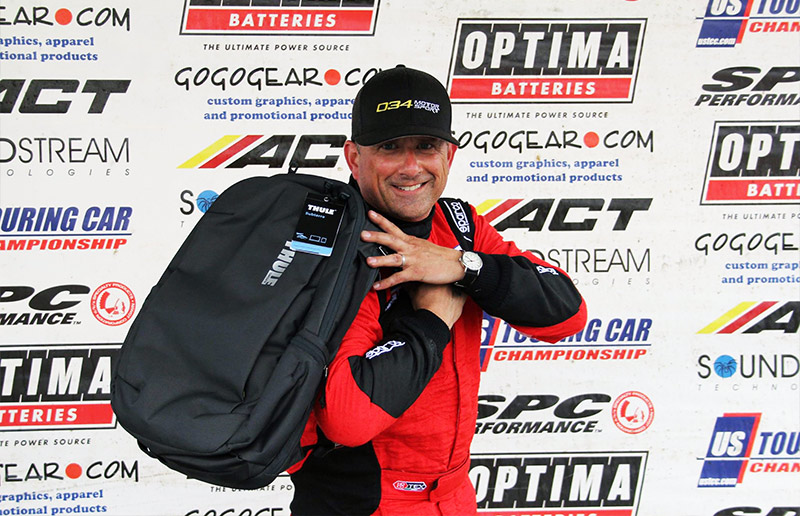 Tangible support comes in the form of winning several hundred dollars for various on-track accomplishments to products such as springs, car care products, luggage, and other goodies. A good-natured environment attempts to recognize everyone that makes the effort and the supporters of the series. Sponsors are very loyal which is quite unique. They return year-after-year because of the value they get and the chance to work with and support like-minded racers. 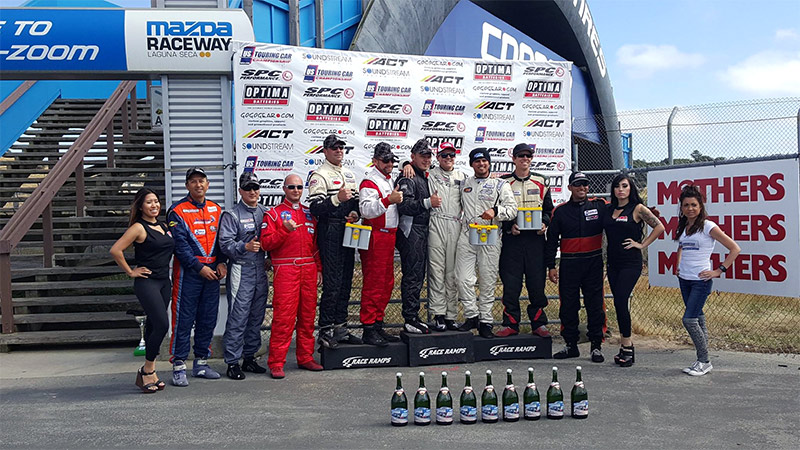 Winning in this series is recognized and rewarded. The winners of each class stand on the podium, claim the trophies and spray the champagne. The competition is spirited, but respectful. 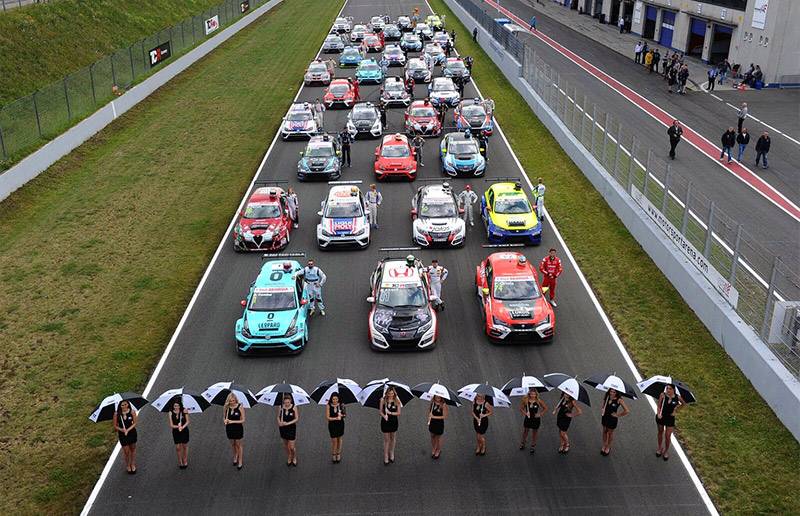 USTCC has a partnership with TCR International. TCR stands for Touring Car International. In Europe, TCR cars are generally limited to hot hatchbacks with smaller engines. The formula is intended to be a little sibling to the World Touring Cars which are more powerful, more sophisticated and more expensive. TCR cars are generally racing versions of cars like the Honda Civic, Ford Focus, Audi TT, Subaru WRX and Volkswagen Golf. The calendar runs in support of several Formula One rounds, European LeMans, German DTM touring cars, and also TCR-focused series around the world. 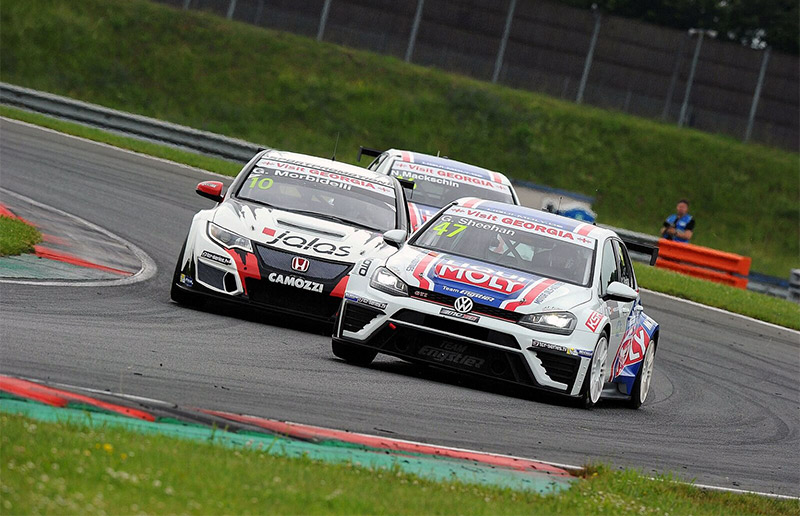 The technical regulations aren’t identical, but the partnership makes for enough of a common philosophy that successful USTCC drivers have had some opportunities with Touring Car teams in Europe to visit, test and even consider racing. Not every driver may be interested in pursuing the opportunity, but there is something attractive to knowing that a few doors might be pushed open a bit further if there was interest and some merit to make a case for a closer look. The USTCC platform has hosted a range of talent, experience and ambition. Some entrants have used USTCC has a launching pad to other road racing series and events and others just run in USTCC for the thrill of close track competition. 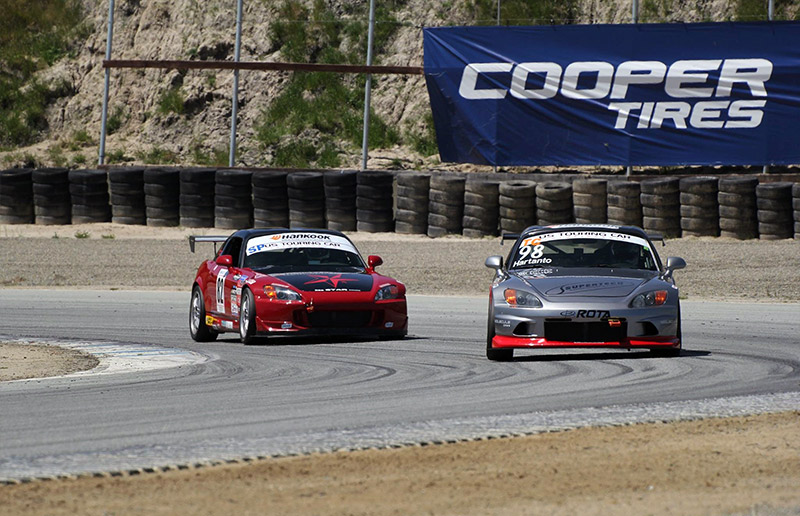 As with any good racing weekend, the bench racing and camaraderie is a big part of the magic. Once the track went cold on Saturday evening at Laguna Seca, a social dinner kicked off – complete with a taco truck, margaritas and beer. When you have a welcoming paddock of fellow racers that share a common language, it doesn’t take long to feel comfortable.

The Sunday main event featured 45 minutes of spicy action. A hallmark of touring car racing is standing starts which is a bit of a novelty for most race series. The faster GT class cars grid at the back which challenges them and makes for entertaining track action as they slice their way to the front. Francis used his BMW M3 to challenge series regular Andrew Gardner’s Ford Mustang in the SP class lead. After a brief lead at the start, Francis gave way to Gardner who led for most of the race and was able to hang on for the win despite a late yellow that clustered the field and gave Francis one last chance. 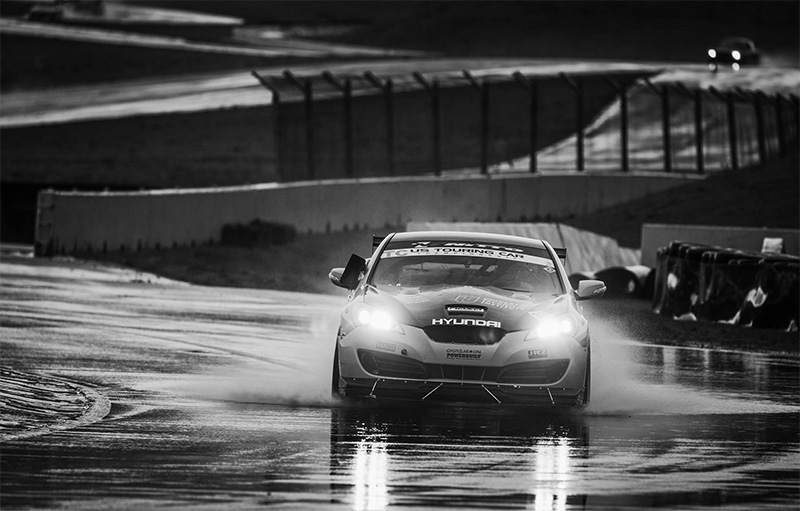 For the club racer that’s looking for a little something different, USTCC is a cost-effective way to find strong competition on some iconic tracks and get the chance to spray a little champagne to celebrate a win. The approach is certainly mindful of budget in terms of entry fees and associated costs of going racing. The fact that manufacturers and sponsors throw in support makes it even more rewarding. 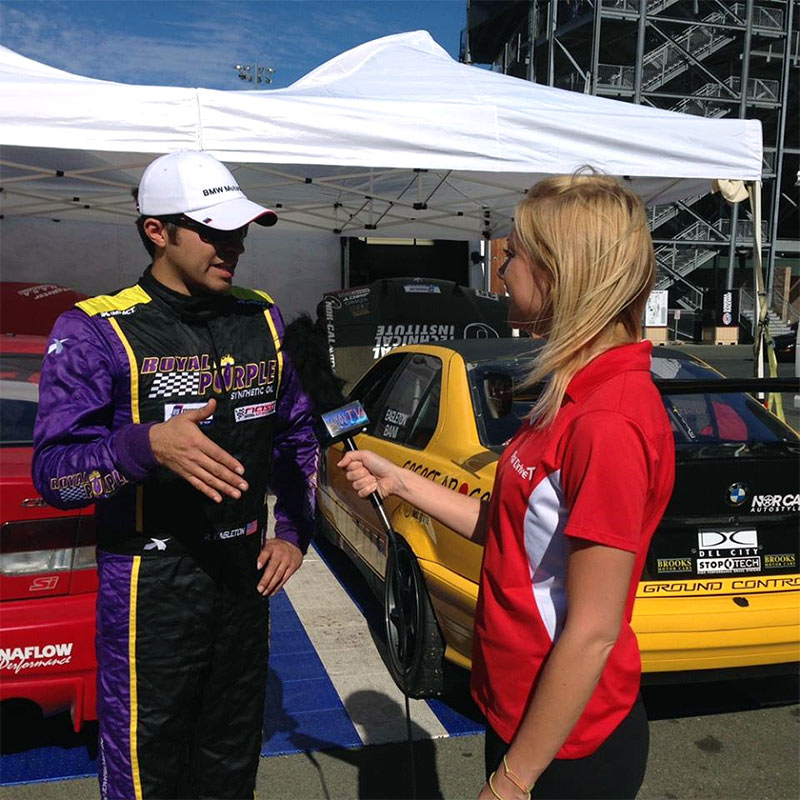 USTCC also has the benefit of exposure on drivetv.com. The internet portal also has an arrangement with regional NBC Sports in California which means there is an opportunity for a bit of extra exposure. 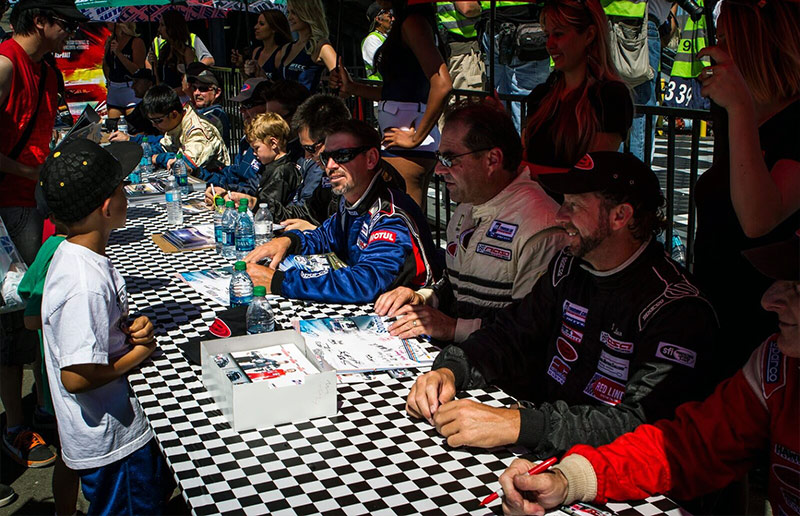 Bored with autocross? Looking for something different than the club racing weekend? Want a chance to run a televised event against strong competition on some of the best tracks in the west? Looking for a gateway to touring car racing in other countries? If any of this sounds intriguing, perhaps the USTCC is for you. Check them out at www.ustcc.com and look for the 2018 calendar to swing by for a closer look. 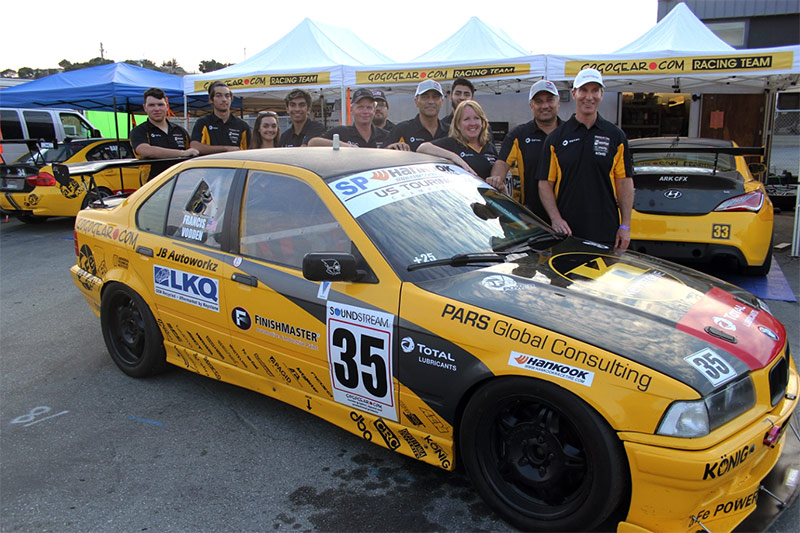 The Speed Journal would like to thank USTCC, Team GoGoGear.com and organizer Ali Arsham for the invitation and the chance to race with the USTCC crew.