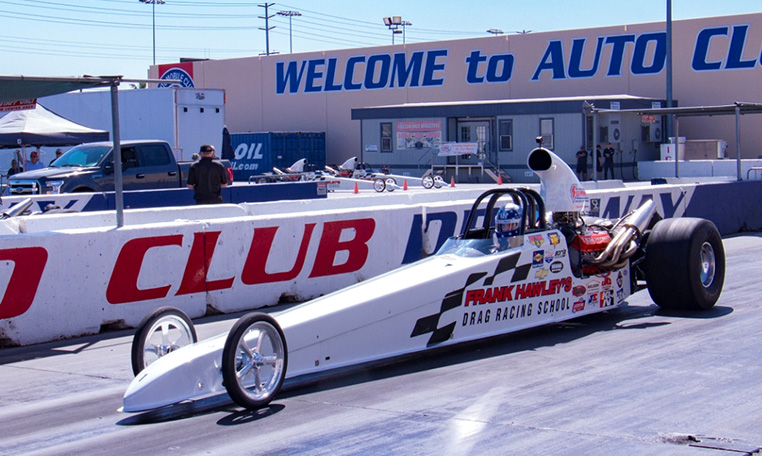 A big block Chevy lopes in the distance, getting louder as the rail dragster approaches the staging area. The engine’s heartbeat, blat-blat-blat-blat, becomes a deafening roar as the massive rear tires spin and smoke, a quick burnout to get temperature into the tires. The dragster stages, the yellow lights on the tree ﬂash on and ﬁnally the last light goes green. A wall of noise erupts as both drivers react and almost instantly launch down the track. Adrenaline-ﬁlled thrills meet professional-level NHRA instruction. This is Frank Hawley’s Drag Racing Adventure Challenge. 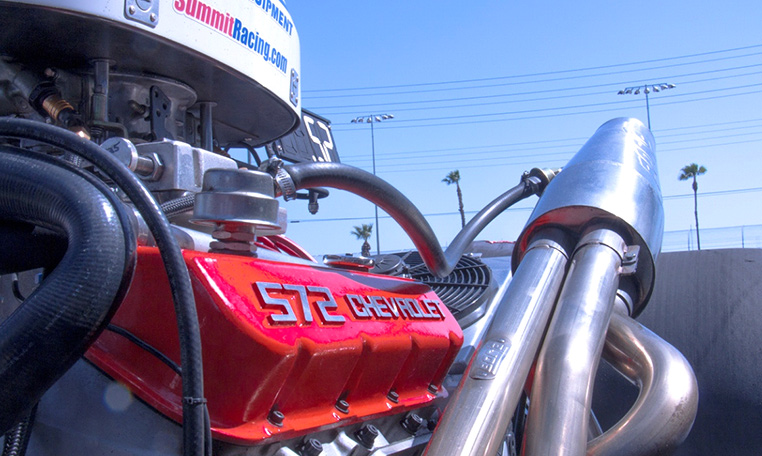 Hawley is a pioneer in his ﬁeld. Since 1985 Frank’s racing school has been teaching adrenaline junkies all over the United States how to blitz the quarter mile quicker than their competition. Both thrill seekers and professional-racers-in-training come to Frank’s school for top-tier instruction from the man himself and other NHRA world champions.

While the experience was new to him, team principal Jeff Francis put his passion for various race disciplines to work in a full-size rail dragster during the beautifully sunny track day at Auto Club Speedway in Southern California. As with the other students in the adventure experience, Jeff’s ﬁrst step towards getting in the car was a classroom session led by Hawley. Discussing safety elements and proper etiquette for a successful experience, the students learned how to get down the track safely.

After a walk of the track and an in-depth introduction to the dragster’s controls, the drivers were able to take a crack at a one-eighth mile run. Students demonstrating safe driving and procedural correctness were then allowed to run the quarter mile two more times. When Jeff came back from his run, he was beaming like a little kid who had just discovered bacon. He looked over and said, “It’s like being shot out of a cannon, there are no words that can really describe it, you have to experience it ﬁrsthand.” 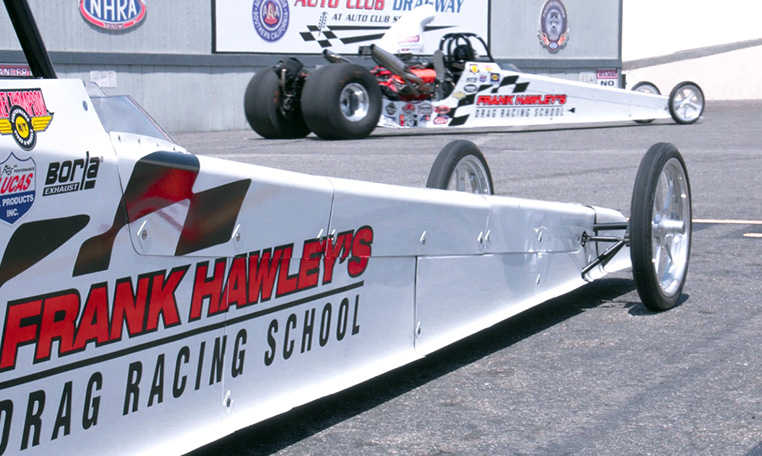 To enhance the driver experience, another class session followed. Focusing on improvement, Hawley discussed with the drivers, what they did right, and what could be improved upon. Hawley stressed that you cannot guess when the tree’s green light will ﬂash and that reaction time is equally important as getting down the track as quickly as possible. Hawley joked about the things that novice drivers regularly get wrong about reaction time. He said, “Often times drivers will watch the guy in the other lane and if he goes before the light turns green the driver will panic and go as well. You don’t want to do that. Just remain cool and watch the tree, it doesn’t matter if the other driver goes, you are in your own personal race and you only want to leave when that light turns green.” He reiterated a comment he made earlier, stating, as a driver you need to remain calm and focus on your race, the other guy is just there. It is your times that matter and if you’re focused on what the other driver is doing, you very well may end up losing the race. Hawley’s instruction was pivotal to the next stage of the day. Side by side competition, real elimination-style drag racing with multiple rounds and only one winner in the end. 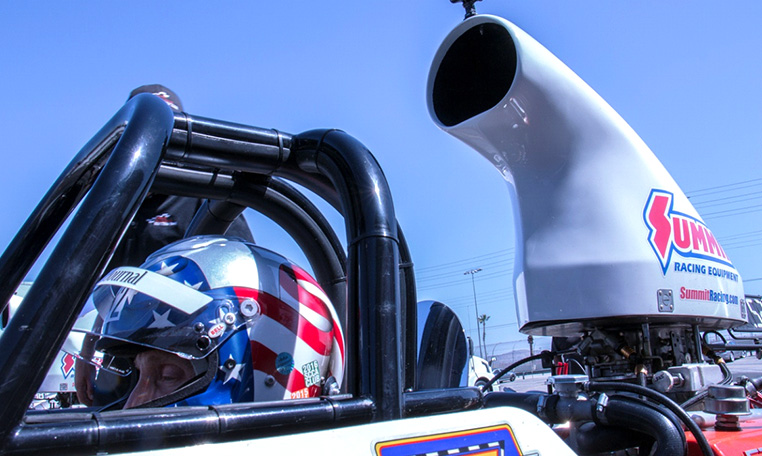 Heading back to the dragsters for the side by side eliminations, you could see the excitement build on the driver’s faces. The machines were ﬁred up. Smoking tires were followed by staging lights as both drivers moved to the start line. Entirely focused on the tree, Jeff patiently waited for the green light, even as his opponent launched early. After what seemed like an eternity, he finally got the green and hustled the car down the strip. His patience paying off, correct reaction timing pushed him to the second round as the winner.

In round two Team Francis was given a bye, meaning Jeff would move to the ﬁnal round; the race to decide the overall winner. The bye was a blessing and a curse, his competition now had two winning rounds under his belt. The pressure mounting, the men proceeded to their cars. To make the race fair, one driver would pick their lane of choice, while the other picked their car of choice. With Jeff deciding to take the left lane, his opponent chose his car and the two got strapped in for the ultimate race of the day. 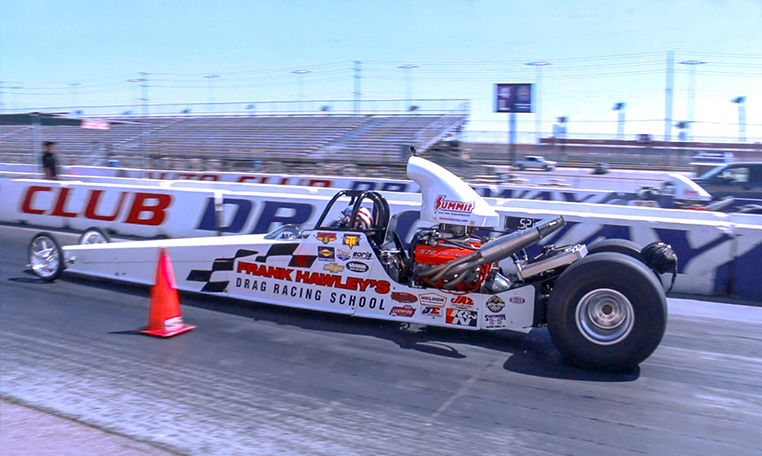 Under the dwindling light of the sun, the stage was set. Again the drivers mashed the throttle and roasted the tires of Hawley’s dragsters, everything they learned that day was about to be put into practice. Could Jeff, a ﬁrst time dragster racer, take it all or would his seasoned opponent prevail? 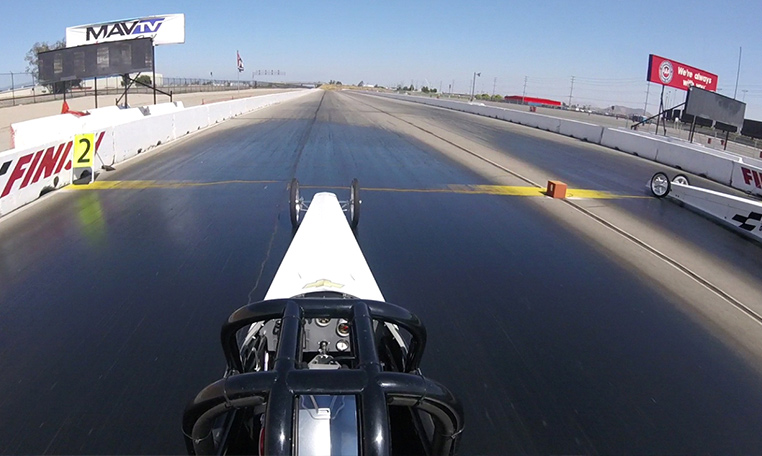 Feeling the tensions rise as the ﬁrst lights ﬂashed, the next ten seconds would decide who took the day. The green light ﬂashed and away they went. Jeff had a slightly quicker reaction time as he launched out of the box, but it was a wheel to wheel race down the strip. Jeff narrowly lost the ﬁnal round by three-hundredths of a second. As the drivers pulled back to the pitting area, there was still much excitement in the air. Smiling as widely as he had after his ﬁrst run, Jeff was happy with the result. He may not have won, but he still had a blast and was pleased with his overall performance. He and his opponent shook hands and congratulated each other, sportsmanship not lost in the heat of competition. After all, the day is about getting a taste of what NHRA drag racing is all about. The thrills, the adrenaline, and the experience of being launched down the track in a car many people only dream of. 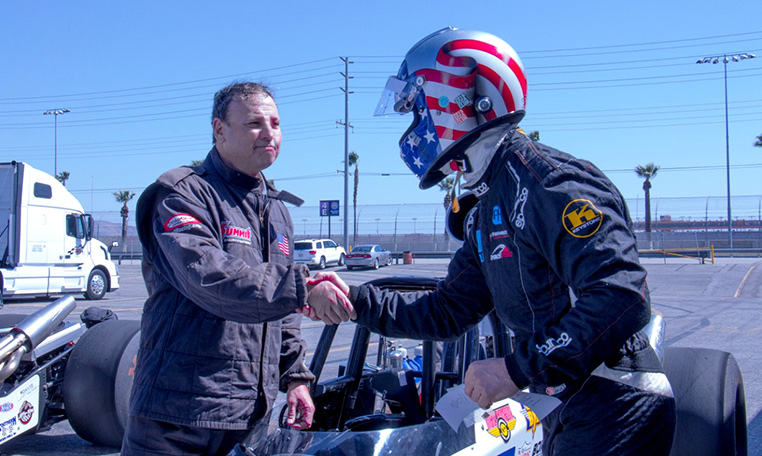 To expose as many people to the experience as possible, Frank Hawley’s Drag Racing Adventure Challenge is available at tracks over the country. Traveling from Florida to California and locations in between, Hawley invites those who wish to put their skills to the test and learn about the art of drag racing to come and experience the power of his cars. Adventurers will appreciate the professionalism and effort Frank Hawley and his world-class team put into making sure his students get the most fun out of the day in a safe and exciting manner. Stay tuned for more of The Speed Journal’s coverage of the Frank Hawley School and don’t be surprised if you see Jeff as a fellow student in the NHRA licensing course; that’s coming next!