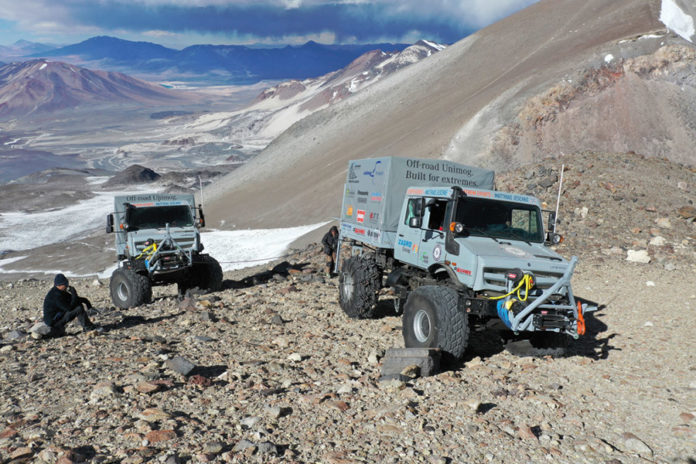 For 70 years, the Unimog has been a celebrated vehicle when it comes to scientific expeditions in all places and climates around our earth. And now a ten-strong expedition team led by Matthias Jeschke have climbed the highest volcano in the world, the Ojos de Salado in Chile, with two Unimog U 5023 vehicles. 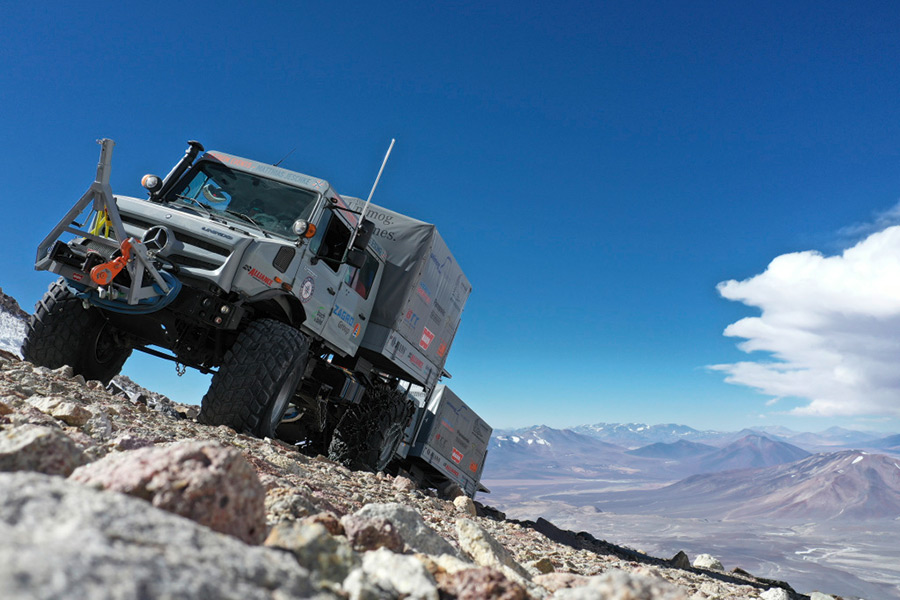 The team’s task was to install four emergency radio units at various high-altitude camps on the volcanic mountain. In an emergency, each of the four units can be used to create a radio connection with the three other base camps of the Ojos del Salado. This system will improve the safety both for mountaineers and scientific researchers. The Ojos de Salado measures 6893 m and is thus the tallest active volcano on our planet. The volcano is part of the Atacama Desert – one of the driest places on earth and part of the notorious Pacific Ring of Fire. 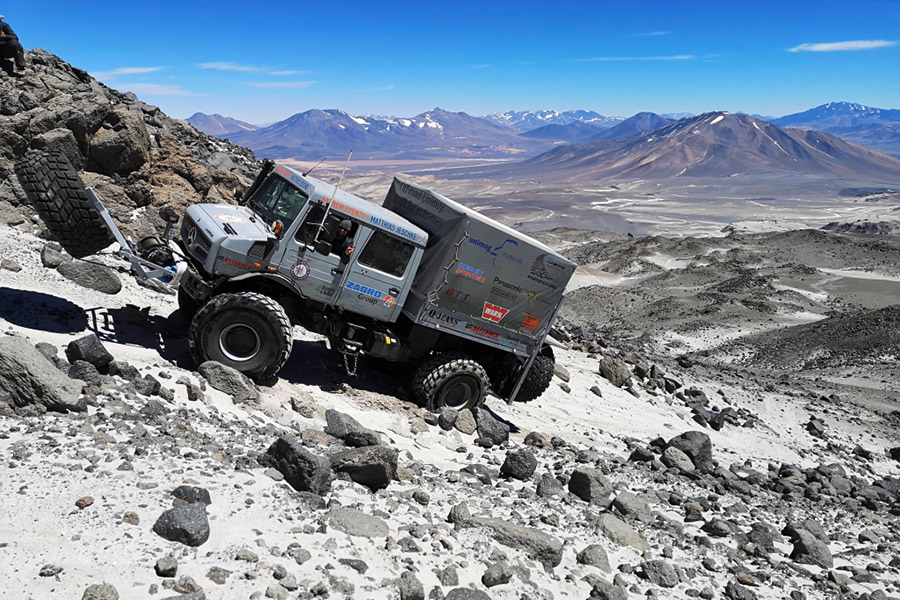 After the expedition team made it to the Amistad high-altitude camp at 6100 m with the two Unimog U 5023 and had completed the installation of the fourth emergency radio unit there, the team set about achieving another milestone: breaking the altitude record for wheeled vehicles. This was achieved by one of the two Unimog trucks at an altitude of 6694 m. Never before had vehicles climbed to such heights anywhere around the world. 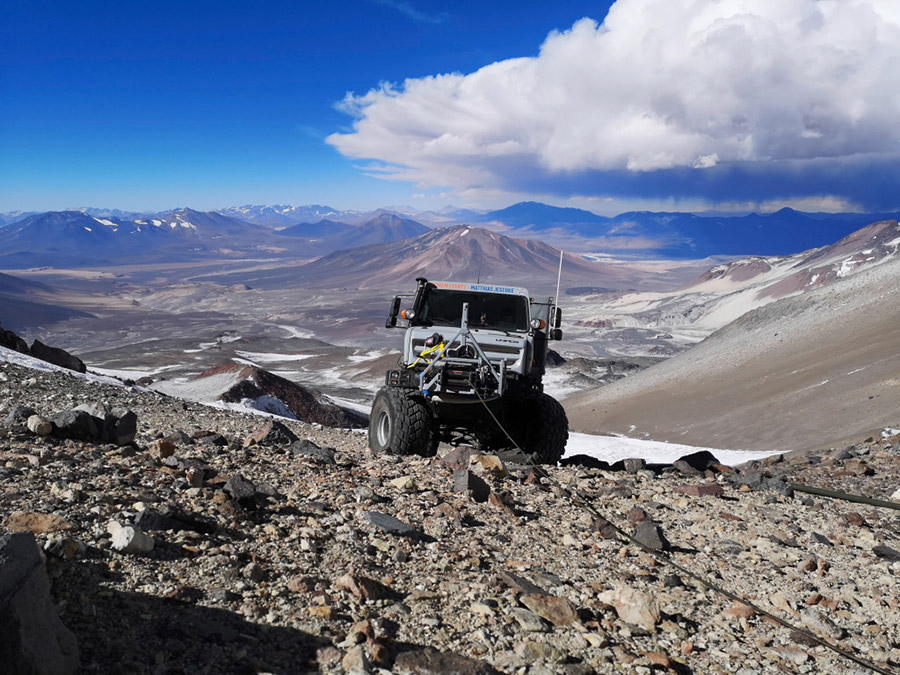 The expedition was supported by Mercedes-Benz Special Trucks which provided two extreme off-road Unimog U 5023 vehicles of the latest generation to carry the expedition team and all of their equipment required to these extreme altitudes. To ensure that the vehicles were ready to tackle the challenges of such extreme altitudes, both Unimog trucks were equipped with special tyres, strong winches and special bodies with variable centre of gravity balancing developed by the specialists at the Unimog Museum, Unimog bodybuilder AS Söder and by engineers from the Unimog development team. 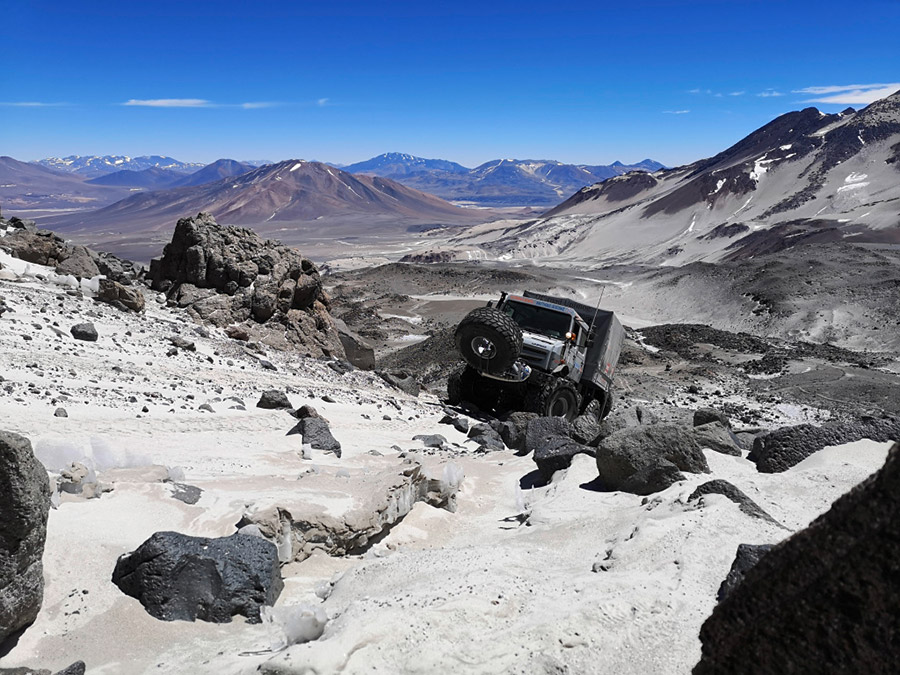 With this, the owner of the Extrem Events company, Matthias Jeschke, and his team didn’t just beat their own record with a Mercedes-Benz Zetros in 2014, they also set the absolute world record for a wheeled vehicle driving at altitude. According to the head of the expedition, Jeschke, both vehicles “mastered the extremely steep and rocky passages thanks to a combination of the best, reliable technology, a balanced centre of gravity and amazing tyre technology to bring the materials and equipment to these enormous heights. At no point in time around the world have motorised altitude expeditions taken two trucks simultaneously to such an altitude.” A double world record for the two Unimog U 5023 vehicles and a further step made in scientific exploration in the Pacific Ring of Fire.

Previous articleNew TVR Griffith in London! Chasing My Future Shmeemobile
Next articleCrashing My Lamborghini Into Wall at Racetrack – DailyDrivenExotics

The Maybach S 650 is the most powerful in the Mercedes-Maybach sedan lineup.
Read more
Automotive News

After three days of filming the result was a dynamic, exciting flight through the museum.
Read more
Feature Videos

Sir Stirling Moss died on 12 April 2020. He was a star of the Mercedes-Benz racing team in the 1955 season.
Read more