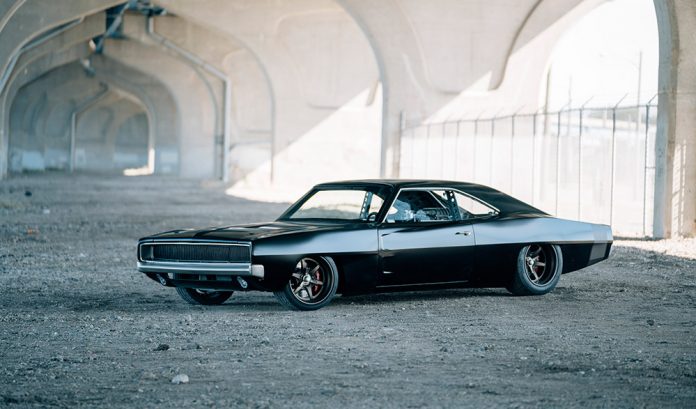 Built as a road-going version of the movie car driven by character Dominic Toretto in Universal Pictures’ new Fast & Furious blockbuster, F9, SpeedKore’s “Hellacious™” Charger is the custom car builder’s first mid-engine classic muscle car. SpeedKore has worked with the Fast franchise since 2015 when its 1970 Dodge Charger “Tantrum” appeared in Furious 7. Both SpeedKore Chargers will appear in F9, which arrives in U.S. theaters June 25, 2021.

“This Charger is one of our most extreme builds to date,” said Jim Kacmarcik, president and owner of SpeedKore. “After commissioning renowned designer Sean Smith to design the car and working with F9’s picture vehicle coordinator Dennis McCarthy to build the nine chassis and vehicle bodies for the film, we wanted to bring the movie magic of F9 to life. ‘Hellacious’ is a road-going version of the movie car with the functionality of a purpose-built performance car. We couldn’t be more excited to debut ‘Hellacious’ alongside the actual film as yet another unique representation of our design and engineering capabilities as a custom car builder.”

“Hellacious” gets its power from a supercharged 6.2-liter Hellcat V-8 mounted between the rear axles in a custom SpeedKore-engineered frame. The engine’s 707 horsepower and 650 pound-feet of torque make it to the rear wheels via a gated-manual Graziano transaxle from a Lamborghini Gallardo. Both the engine and transmission use Motul fluids for reliable performance.

The Hellcat V-8 breathes through a custom exhaust fabricated from MagnaFlow components; the SpeedKore-designed headers and dual mufflers are routed high in the chassis to clear the mid-engine powertrain before exiting through downward-facing tips. A front-mount Saldana performance radiator keeps the engine cool while accommodating the mid-engine architecture of the car. At the rear, high-performance intercoolers feed cool air to the 2.4-liter supercharger.

To balance the extensive body modifications, SpeedKore included some subtle details as well. The vertical-slat grille uses factory 1968 Charger hideaway headlights and is finished with metal brightwork, complimenting the brushed steel front and rear bumpers. Shaved rain gutters and flush-mounted glass present a seamless side profile while a rear fascia with round quad taillights and a bronze stripe keyed to the color of the wheels finish the look.

For more information on the 1968 Hellacious Dodge Charger and SpeedKore carbon fiber parts, please visit www.speedkore.com, or stay connected with the team on Facebook and Instagram at @SpeedKore01.