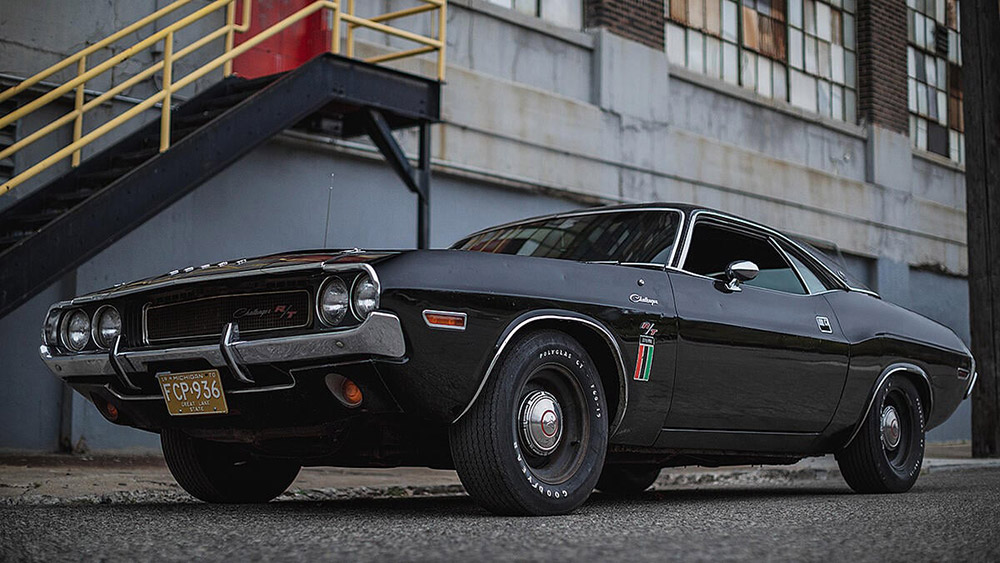 The legendary 1970 Dodge Hemi Challenger R/T SE, known as the “Black Ghost” in the Detroit street racing scene of the 1970s, was unveiled today at Mecum Kissimmee 2023, the World’s Largest Collector Car Auction®, as the headlining consignment for Dana Mecum’s 36th Original Spring Classic, which will be held this May 12-20 at the Indiana State Fairgrounds in Indianapolis.

Godfrey Qualls, a Detroit police officer by day and mysterious street drag racer by night, dominated the Motor City power scene with his black 1970 Dodge Hemi Challenger R/T SE adorned with the “Gator Grain” roof treatment and white tail stripe, and powered by the 426 Hemi engine. After serving in the Army’s 82nd Airborne Division, Godfrey ordered the car new at Raynal Brothers Dodge in Detroit, with it arriving on December 5, 1969. He put it to good use, rumbling to local hangouts, including the famed Woodward Avenue and Telegraph Road, ready to trounce any contender. With a win secured, the pair would then disappear into the darkness for weeks and months at a time. The vanishing of Qualls’ triumphant Dodge Challenger earned it the nickname “Black Ghost.”

In 1975, with numerous victories achieved and a mythical legend bestowed, the “Black Ghost” again went off the grid; however, this time it was gone from the Michigan streets for decades. Godfrey went silent, too, neither sharing stories nor boasting of his victories in the “Black Ghost.” That left his son, Gregory, to learn of his dad’s midnight Mopar escapades from family and friends.

That changed in 2014, when Godfrey invited Gregory to his house; the pair went to the garage, uncovered the black Dodge Hemi Challenger R/T and spent the afternoon cleaning the classic gem. However, that new bonding time would soon be cut short, when Godfrey’s prostate cancer returned in 2015 and made its way into his bones. By December of that year, he was hospitalized and fighting for his life. With days to live, Godfrey requested his son retrieve a special envelope from his home and bring it to the hospital. Inside was the car’s paperwork, and after 46 year of ownership, Godfrey signed ownership of his beloved “Black Ghost” over to Gregory.

“We all love a good car story, but this is nothing short of an all-American muscle tale forged in the heart of the Motor City,” Mecum Vice President of Consignments Frank Mecum said.

“When you have the combination of a Purple Heart-awarded military veteran and a unique ’70 Challenger with the mythical street racing of a clandestine Detroit cop, the muscle car, drag racing and Mopar enthusiasts take notice.”

The car earned such a revered place in history and hearts that it became the driving inspiration behind one of Dodge’s most recent special edition Challengers: the 2023 Dodge Challenger Black Ghost. Just 300 of the Redeye Widebody car will be built in total, and one of them is on display at the Mecum Kissimmee Auction right now.

Those interested in consigning a vehicle for auction at this year’s Spring Classic may find complete details about the consignment process and pricing at Mecum.com and are encouraged to submit a Request for Position form now to take advantage of pre-auction marketing opportunities.

Mecum has reinvented its bidder registration process, making it easier than ever for collector car enthusiasts to bid on their dream car, both from home and at the auction. Options for in-person, telephone and internet bidding start at $100, offering bidders the opportunity to get in on the Kissimmee auction action in whichever way suits them best.

For more information on Mecum Kissimmee 2023, Dana Mecum’s 36th Original Spring Classic in Indianapolis and all other Mecum auctions, visit Mecum.com. Mecum’s website is updated daily with the latest consignments and includes detailed descriptions and photographs of the vehicles to be offered. For schedule information, to consign a vehicle or to register as a bidder for this and all Mecum events, visit Mecum.com, or call (262) 275-5050 for more information.

Admission: $20 in advance online, and $30 at the door and online after May 12—per person, per day; children 12 and younger receive complimentary admission

Auction: The vehicle auction will begin on Friday, May 12 through Thursday, May 18 at 10 a.m. and on Friday and Saturday, May 19 and 20 at 9 a.m., with Road Art to be offered 30 minutes prior to the vehicles

TV Schedule on MotorTrend: To be announced