By: SLSHOP | Photos Courtesy of: SLSHOP 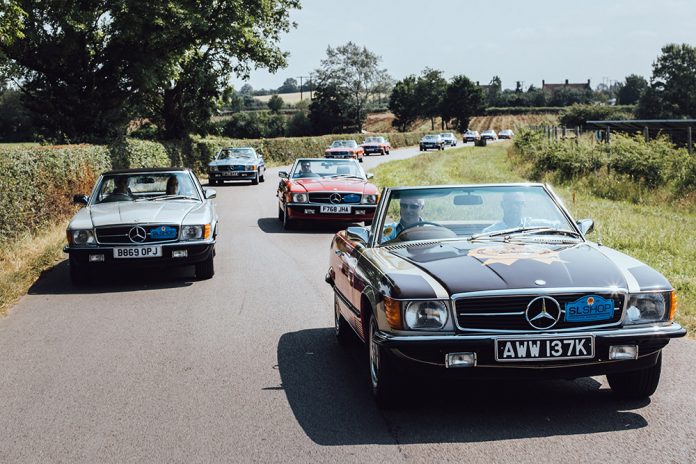 SLSHOP commemorated the 50th anniversary of the Mercedes-Benz R107 SL marque by hosting over 70 vehicles at the company’s head office, before driving in convoy down to Mercedes-Benz World, Weybridge, Surrey. The company created its own SL Boulevard on-site to facilitate vehicles and their owners from all corners of the country. Guests travelled as far as Scotland and Devon to take part in this momentous occasion.

Upon arrival, guests were greeted by the SLSHOP team and former Top Gear presenter and motoring journalist, Quentin Wilson. SLSHOP mechanics carried out complimentary oil and water level checks and attached a #SLSHOP50 rally plaque to each owner’s vehicle. Guests arrived in seventies style reflecting the 100 different colourways which the R107 SL was offered in between 1971 and 1989.

To raise money for Teenage Cancer Trust, the company invited Quentin Wilson to talk about his experience of caring for his daughter who fought cancer as a teenager. Guests were then invited to share their ownership experiences, revealing the history of their vehicles and the trips and tours they had enjoyed.

One owner had inherited their SL from their father, who collected the car from the Mercedes-Benz factory in Stuttgart in 1971. The owner and her son painstakingly restored the Signal Red 350 SL over lockdown, finishing the restoration just in time for the #SLSHOP50 event.

Before leaving the SL Boulevard, all 70 vehicles participated in a parade lap of the company’s site, while photographers, camera crew and local media captured the sights and sounds of Germanic excellence. SLSHOP’s Art Car then lead all 70 vehicles through Stratford-Upon Avon and down to Mercedes-Benz World.

Upon arrival at Mercedes-Benz World, a further 30 R107 SL models were waiting, as well as other modern marques showing their support. Owners were welcomed by a speech from the UK Mercedes-Benz Marketing Director and President of the Mercedes-Benz Club, Rob Halloway, who shared his appreciation for the R107 SL. Guests then took part in parade laps of the esteemed track before lining up on Campbell Curve for a Hero photo of all R107 models.

R107 SL Owner, Sara Blakemore, reported that ‘’SLSHOP hosted the most fabulous event for the 50th Anniversary of the SL. Everything was planned down to the smallest detail, and they were so generous with their hospitality. It was truly tremendous getting over 70 SLs together with their proud owners at SLSHOP; to be met by even more at MB world.’’

The R107 SL remains the second-longest production vehicle offered by Mercedes-Benz; with over 200,000 built and shipped to all corners of the globe. The feat of the R107 SL was helped by a multitude of popular culture endorsements, rally successes and tremendous German engineering and styling. The R107 remains a usable, fun, and stylish classic revered by many in the UK and abroad.

“The success of our #SLSHOP50 event reflects a truly unique spirit possessed by a select few individuals, all of whom enjoy connecting around the R107 SL. I couldn’t be prouder of SLSHOP’s staff for organising and executing such a wonderful day of driving and socialising. Of course, my thanks to Mercedes-Benz World for facilitating over 100 cars on their track.’’ – Managing Director, Sam Bailey

SLSHOP is the UK’s foremost specialist in the R107 SL, for sales, servicing, restoration, and upgrades. As well as having a huge stock of SLs for sale, SLSHOP boasts the world’s largest inventory of SL parts. SLSHOP can also build cars for racing and rallying and has even built a fully electric battery-powered plug-in ‘SportLine Zero’ model.

SLSHOP will continue to bring owners together over the next few years, offering trips and tours for members of the SLSHOP Tribe. The company has already sold out for its September Wales Tour and its May 2022 Cotswolds Tour. SLSHOP will be increasing the number of trips and tours it offers in conjunction with the launch of a new members club, open to all SL owners, customer or not.