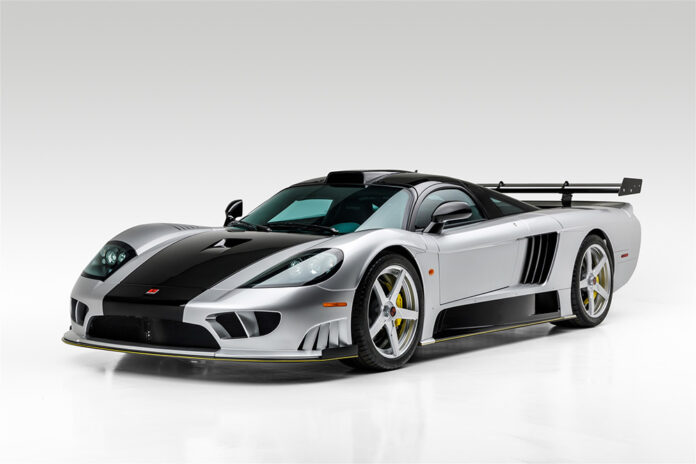 A superlative selection of contemporary collectors’ cars and supercars – the classics of tomorrow – will cruise into Bonhams Los Angeles for Supercars on Sunset, an all-new sale concept hosted in the capital of car culture, on Saturday, April 10.

Consignments are now invited to this premier auction to join an early confirmed offering – a home-grown Californian supercar, a 2007 Saleen S7-LM, one of the rarest supercars produced and one of just three examples ever built. It has an estimate of $1,000,000 – 1,300,000.

The S7 was the realisation of a lifelong dream of racing driver and team manager Steve Saleen to create his own supercar. Designed in partnership with respected racecar engineering firm Ray Mallock Limited, the S7 enjoyed success on the racetrack, most notably in 2001 when it secured four championships, including the American and European Le Mans racing series.

The subsequent S7-LM, introduced in 2007, delivered ground-breaking race car performance with an output of 1000 bhp, the power being routed to the rear wheels by a manual six-speed transmission. This analog supercar has a top speed of 248mph, hinted at by the speedo reading up to 240mph. Only three examples of this special edition model were produced.

This early star of the Bonhams sale is a one owner example offered by its original purchaser, and has been kept in an impeccably preserved condition, having covered a mere 300 miles over the past 14 years. Finished in silver, its supercar external features, including adjustable rear spoiler and ‘butterfly’ doors, are complemented by the black leather interior with yellow and aluminum accents.

Jakob Greisen, Bonhams Vice President – Head of US Motoring, said:“We are very excited to present this all-American supercar in the Bonhams Supercars on Sunset auction.

“This new sale concept will provide the ideal opportunity for the innovative collector to invest in the most exciting high-performance machines of the modern era which are at the same time emerging as collectors’ cars, being increasingly appreciated for their design, engineering and overall impact on automotive culture.”

Bonhams, which has more than 40 years’ experience in the collectors’ car market, has lately made its mark on the contemporary collectors’ car scene, with a strong performance both in the USA and overseas.

Among the many auction world records secured by the house were the sale of a 1995 McLaren F1 in 2017 at the Quail Auction for $15,620,000, then two years later in Bonmont Switzerland, when a sale price of CHF8,280,000 was achieved for a 2014 Lamborghini Veneno – both marque and auction world record prices.

The lots will be available to view in person, by appointment on April 8 and 9, at the world-famous Petersen Automotive Museum on nearby Wilshire Boulevard in the centre of Los Angeles and the heart of the city’s car culture.

Those not able to attend will be able to use Bonhams’ virtual viewing platform to make an appointment for condition reports and a one-to-one bespoke walkaround inspection with a specialist to examine a specific car in detail from front to back.

The Supercars on Sunset auction will be showcased in an online catalogue with full details, images and videos of all lots on offer.

Supercars on Sunset: The Sale

Bonhams will be conducting Supercars on Sunset on April 10, 2021 at its Los Angeles gallery as a Live & Online auction, which will be presented to a global audience via Bonhams.com.

Registered bidders will have the opportunity to bid in real time online while watching the auctioneer and videos of cars on offer. Absentee and telephone bids are also encouraged.