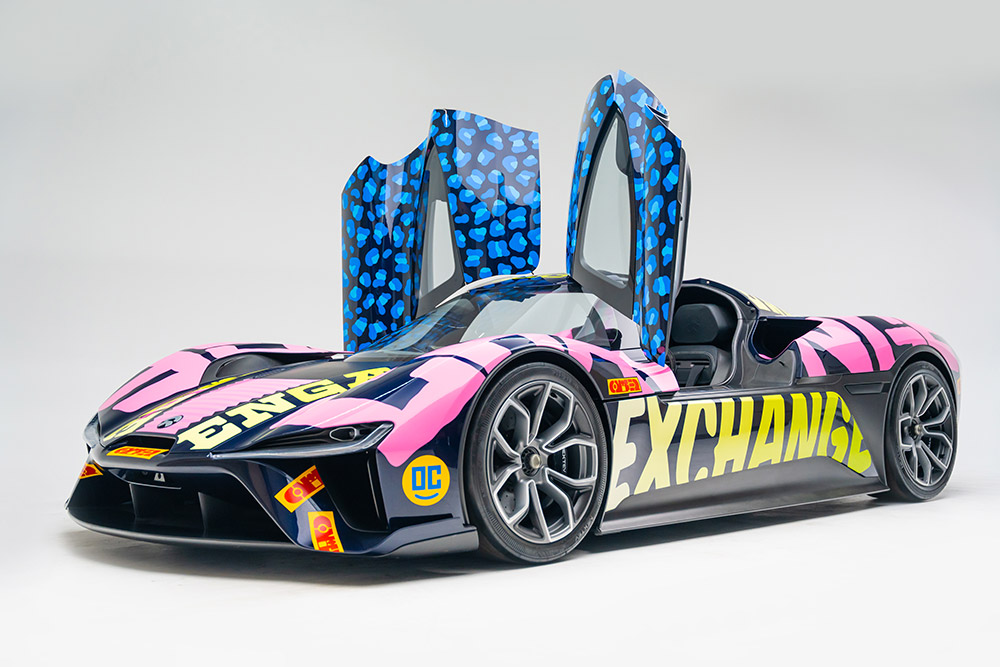 Donated to The Petersen Automotive Museum by NIO, the producer of the EP9 Hypercar, this rare edition is hand painted by artist Ornamental Conifer, aka Nicolai Sclater. Available for bidding online at The Market by Bonhams until October 3 at 16:00 PST, the NIO EP9 is estimated at $800,000 – 1,400,000. With the other 15 cars selling for millions of dollars, this donation marks a new era for the Petersen’s annual fundraiser and is the largest auction item ever offered for sale at a Petersen fundraiser.

Designed and hand built in England using knowledge and componentry from parent company NextEV’s Formula E racing program, the NIO EP9 is an all carbon fiber, all wheel drive, all electric supercar with 1,360 hp and a scalding fast Nürburgring lap record to its name. This example has been visually transformed by the British, L.A. based artist Ornamental Conifer, known for his bold, heavily graphic portfolio incorporating elements of iconic vintage motorsports visuals, graffiti, and traditional hand sign painting. He is also the Art Director of the influential car culture-centric media agency Race Service Los Angeles.

Constructed entirely of carbon fiber and utilizing a chassis influenced by contemporary Le Mans prototype design, the EP9 comes with deeply impressive credentials, including the capability to generate 3 G of cornering force thanks to a whopping 2.7 tons of downforce at 150 mph. Top speed has been quoted by various sources as anywhere between 193 and 217 mph, and 0-60 mph takes about 2.5 seconds. The quarter mile blitzes by in 10.2 seconds at 153 mph.

According to EP9 designer David Hilton (formerly of Bentley and Ford), styling was led by aerodynamics, and the car’s good looks are directly attributable to its function, for example the floating aero panels stemming from the car’s front fenders. These funnel air towards side scoops that provide vital cooling air for electrical components, while also paying tribute to classic internal combustion supercars. A massive air channel runs down the center of the car, and this works with an active three-position rear wing to help achieve the car’s headline 3G cornering figure.

This particular EP9 has been run at multiple racetracks throughout China, including Shanghai and Beijing International Circuits, as well as in Sepang, Malaysia and Bruntingthorpe, England.