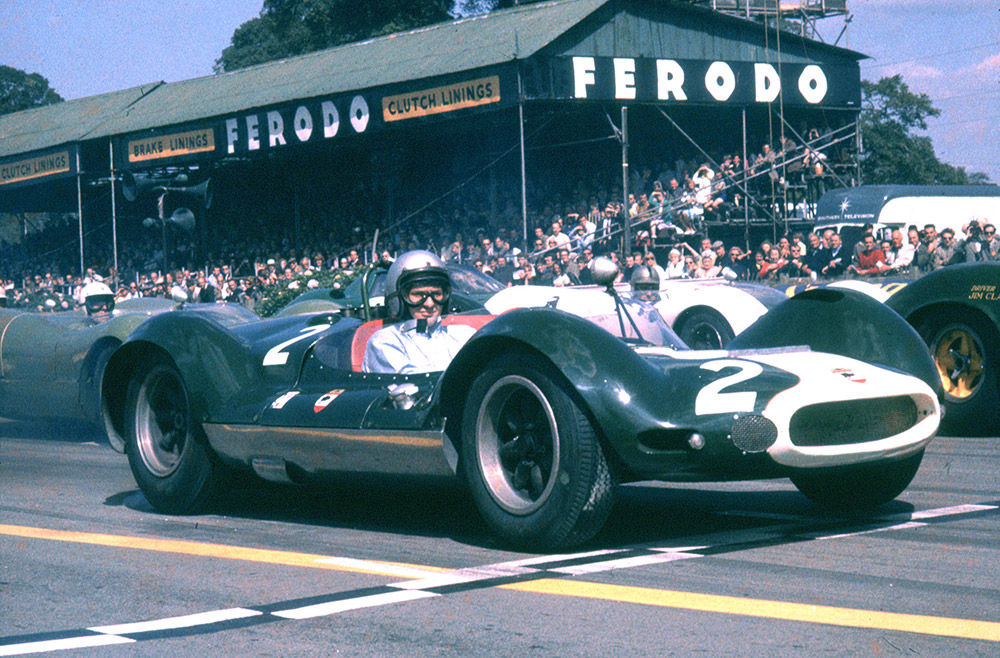 The very first sports car to carry the Michael Turner-designed Kiwi emblem of the late Grand Prix and Le Mans-winning driver and constructor Bruce McLaren – considered the taproot of the modern McLaren marque – changed hands for the first time in half a century, selling for £911,000 to an international collector in Bonhams Goodwood Revival Sale on Saturday (17 September).

Known as the Jolly Green Giant, due to the New Zealand racer’s unconventional painting of its chassis, the 1964 Cooper-Zerex-Oldsmobile sports car had been hidden for more than 50 years, stored in one South American family’s ownership, before it was unearthed earlier this year.

With McLaren at its wheel, this famous machine, which was developed seven different configurations in its racing career, won the Guards Trophy at Brands Hatch in both 1963 and 1964 and starred at Goodwood. The Cooper-Zerex had previously been owned and driven by American racing greats Briggs Cunningham and Roger Penske.

With such pedigree, little wonder that its winning streak continued before the rostrum, being the subject of a serious bidding battle between two determined would-be buyers, with the successful bidder earning applause from the saleroom.

Tim Schofield, Head of Department, Bonhams Collector Cars UK, said: “This was a justifiably strong result for an historically important racing car, which is certainly the origin of the legendary McLaren sports car marque.

“We were honoured to have been appointed by the family to present this treasure to the marketplace at its spiritual home of Goodwood. We are delighted with the outcome, as was our vendor.”

The Cooper-Zerex was just one of the stars of the Bonhams sale which realised more than £11.48 million, with a 72% sell-through rate.

Another example of 1960s sporting prowess was a 1964 Porsche 904 GTS Coupé, which was sold for £614,200. The model enjoyed victory in major sports car racing, including overall victory at the Targa Florio and class wins at Le Mans and the Monte Carlo Rally. This example had competed in rallies and hill climbs in the 1960s and latterly was in the Marcel Petitjean collection for 27 years.

Other highlights of the sale included:

The princely sum of £460,000 achieved by a 1989 Aston Martin Vantage Volante ‘Prince of Wales’. Produced for just two years, to the desired specification of the young King Charles III, the rare model combined Vantage V8 power with understated Volante looks. Converted to land-hand drive at Newport Pagnell, it was offered with original manual transmission.

A one-owner from new 2017 Rolls-Royce Dawn Convertible, the height of soft-top luxury, sped past its estimate to make £264,500.

Another high-flier was the 2013 Land Rover Q40 Defender 110 XS by TECNIQ, which sold for £138,000, with all proceeds being donated to the Royal Air Force Association. This one-off version of the automotive stalwart, extensively redesigned and re-engineered by British specialists TECNIQ, honouring 40 years’ active service of the Chinook helicopter in the RAF.

In the earlier automobilia sale, a cherished UK registration number ‘X 13’ doubled its estimate, selling for £42,500.