The New Mercedes-Benz S-Class: The Automotive Benchmark in Efficiency and Comfort 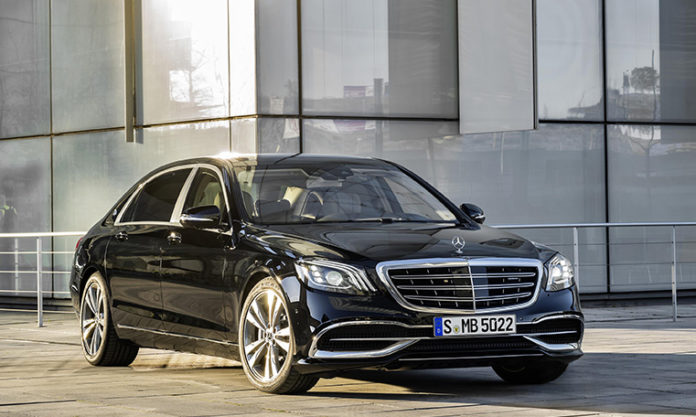 The new Mercedes-Benz S-Class celebrates its world première with extensive innovations at the Auto Shanghai. Among the highlights is an all-new and highly efficient engine range with a series of new technologies for electrification of the powertrain. Intelligent Drive takes another step towards autonomous driving. And the undisputed leader in the premium segment with regard to comfort and wellness sets new standards in the interior. The market launch of the new S-Class starts in the European markets in July.

The top-of-the-range model of Mercedes-Benz takes another big step towards autonomous driving and elevates Intelligent Drive to the next level. DISTRONIC Active Proximity Control and Active Steer Assist now provide even more comfortable support for the driver to keep a safe distance and steer. The speed is now adjusted automatically ahead of curves or junctions.

MULTIBEAM LED headlamps and ULTRA RANGE High Beam turn night into day. ROAD SURFACE SCAN, the forward-looking detection of bumps, and the curve-tilting function CURVE are further unique features of the S-Class in the segment of luxury saloons. 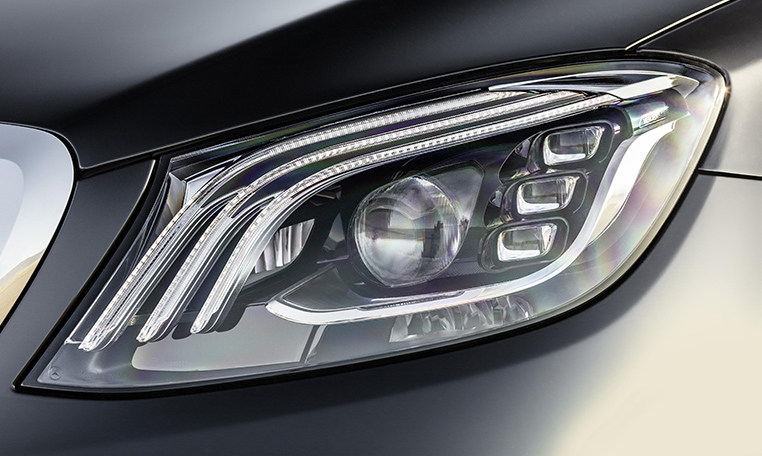 Three torches of light as an exclusive exterior design feature

The upgraded front with extensive chrome trim underscores the exceptional status of the Mercedes-Maybach. Also new is the Maybach logotype between the louvres of the radiator grille.

The new LED lamps with crystal-look tail lamps stand out at the rear. They look like jewels and ensure a characteristic design day and night. A tail lamp light show that plays when the vehicle is unlocked and locked, as well as three horizontal pairs of fibre optics are also new.

The interior of the new S-Class is characterised by the two new high-resolution displays, each with a screen diagonal of 12.3 inches. Visually, the two displays under one shared glass cover blend into a wide-screen cockpit and as a central element consequently emphasise the horizontal orientation of the interior design. 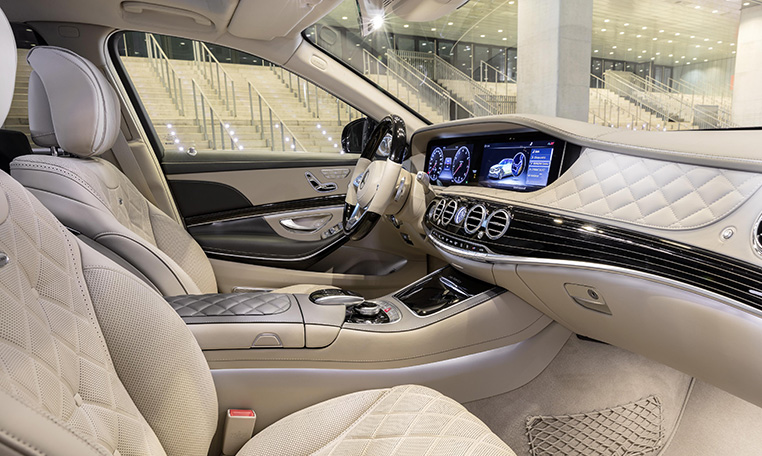 Like the instrument cluster, this wide-screen cockpit contains a large display with virtual instruments in the direct field of vision of the driver as well as a central display above the centre console. Because the cockpit is fully digital, the driver can choose from three different display styles (“Classic”, “Sporty” and “Progressive“) and also configure the information and views relevant to them at will.

The new S-Class has touch-sensitive controls in the steering wheel. They respond to swiping motions like the screen of a smartphone and enable the driver to control the entire infotainment system without having to take their hands off the steering wheel.

The infotainment system can also be operated via the touchpad with controller in the centre console and by LINGUATRONIC voice control. The operation of DISTRONIC and cruise control with control elements directly on the steering wheel is another new feature. 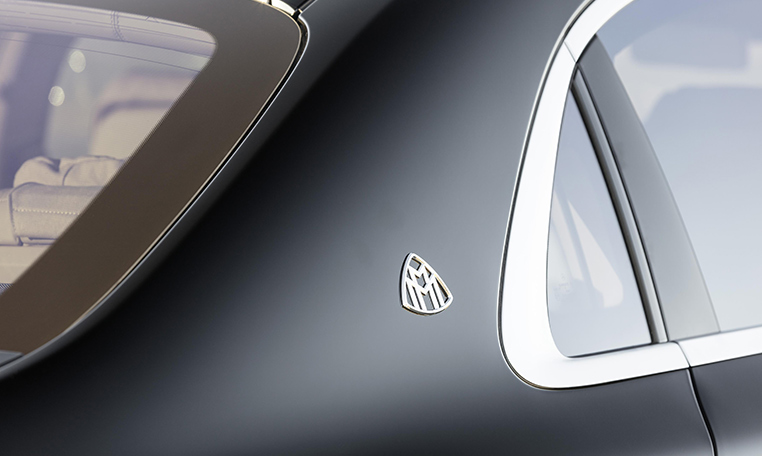 High-quality materials define the interior of the S-Class. These include, for example, open-pore woods as well as leather-trimmed doors and upper body edges, dependent on the trim level. Another Mercedes hallmark clearly in evidence is the high-quality look and feel created through meticulous attention to detail and craftsmanship.

The material and colour concept has also been carefully composed, and features a wide range of brown tones, including new colour combinations such as magma grey/espresso brown or mahogany brown/silk beige.

As before, the interior lighting uses only long-lasting, energy-saving LED technology. With 64 colours, the optionally extended ambience lighting offers a wealth of individual settings. It adds lighting highlights, for example, on the trim elements, the central display, the stowage facility at the front of the centre console, the handle recesses, the door pockets, in the front and rear footwells, on the overhead control panel, and on the tweeters when the vehicle is equipped with the Burmester® High-End 3D Surround Sound System.

All S-Class models are fitted as standard with the KEYLESS start function. This also marks the introduction of the new attractive generation of keys, with a high-gloss black or high-gloss white design and different ornamental frames. 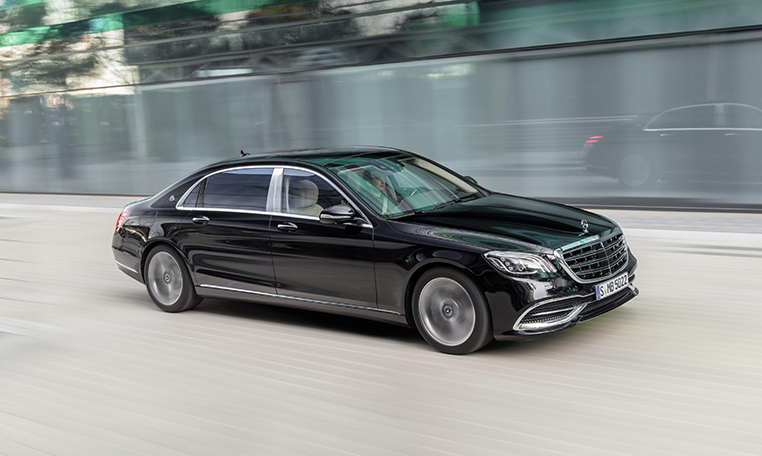 The ENERGIZING comfort control is a world-first entering series production: This optional feature links various comfort systems in the vehicle together. It systematically uses the functions of the climate control system (including fragrancing) and the seats (heater, ventilation, massage), the wall heating as well as lighting and musical atmospheres, and enables a specific wellness set-up tailored to the mood and need of the customer. This enhances the physical comfort and performance while driving and during a break. ENERGIZING comfort can be experienced in all seats, dependent on the equipment.

ENERGIZING Comfort Control also incorporates the ambience lighting, which is harmoniously tailored to each of the individual screen designs. The light stages the interior like a work of art by composing colour worlds from different colours.

The colour worlds can be temporarily replaced with special effects – for example, a special lighting atmosphere welcomes the driver. In addition, the climate control system indicates whether the temperature is adjusted up or down through the colour of the ambience lighting. The brightness of the LEDs adapts equally variably and can be set in five levels and four zones: wide-screen cockpit, area of front seats, rear compartment, and all. As a result, the ambience lighting harnesses the positive effects of light on the well-being while on the road. This makes this equipment feature a key part of ENERGIZING Comfort Control with its tailor-made programmes. 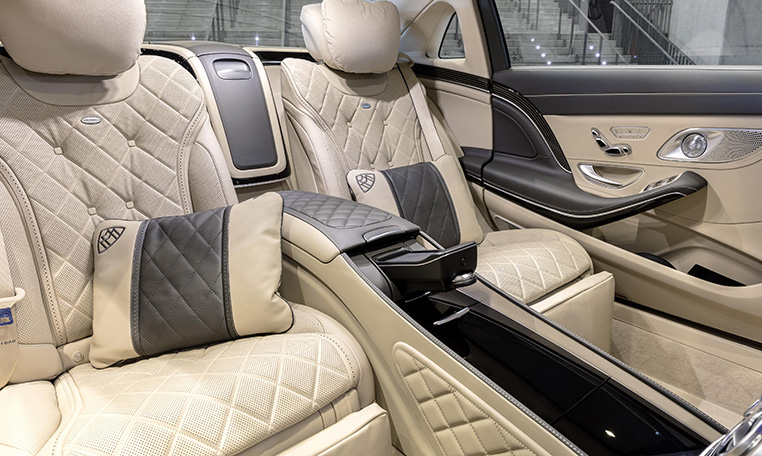 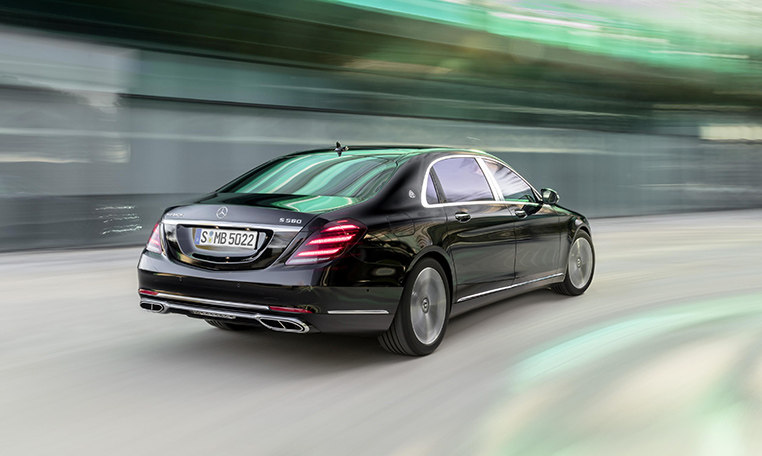 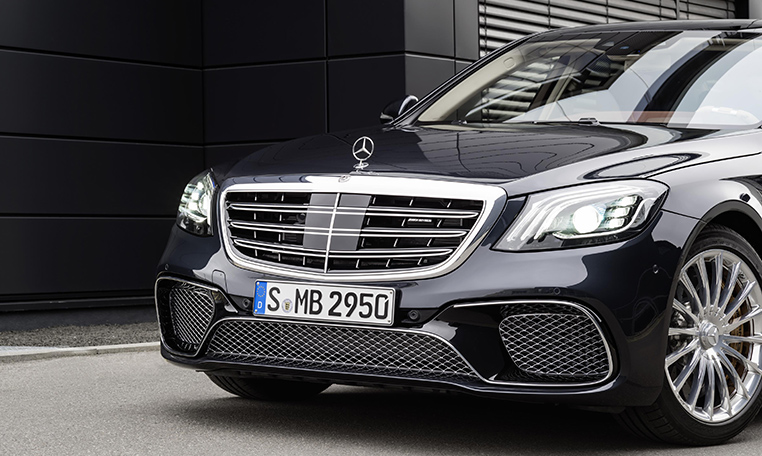 New intelligent forced induction that includes an electric booster compressor, as well as an Integrated Starter Alternator provide outstanding power delivery without turbo lag. The Integrated Starter Alternator is responsible for hybrid functions, such as boost or energy recovery, while allowing fuel savings that were previously reserved for high-voltage hybrid technology. All things considered, the new R-6 engine delivers the performance of an eight-cylinder with significantly lower consumption.

Systematic electrification dispenses with the need for a belt drive for ancillary components at the front of the engine, which reduces its overall length. The slim design, together with the physical separation of intake/exhaust, creates space for near-engine exhaust aftertreatment. The 48-volt on-board power supply serves not only high power consumers, such as the water pump and air-conditioning compressor, but also the Integrated Starter Alternator, which also supplies energy to the battery by means of highly efficient energy recovery. The new in-line six-cylinder comes to the starting line in two output levels.

Upgraded plug-in hybrid powertrain: Thanks to the significantly increased battery capacity of 13.3 kWh, it is intended that the range for all-electric driving will increase to about 50 km. In conjunction with the new Mercedes-Benz Wallbox, the on-board 7.2-kW charger allows much faster charging of the battery. 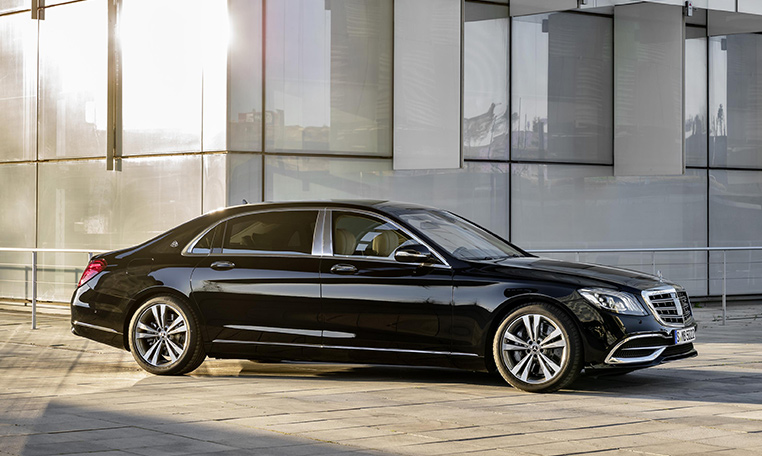 Intelligent Drive: the next step in driving assistance systems

The new S-Class takes another major step towards autonomous driving, elevating Mercedes-Benz Intelligent Drive to the next level. DISTRONIC Active Proximity Control and Active Steer Assist now provide even more comfortable support for the driver to keep a safe distance and steer. The speed is now adjusted automatically ahead of curves or junctions. This is complemented by a considerably improved Active Lane Change Assist and additional functions of the Active Emergency Stop Assist.

Thanks to enhanced camera and radar systems, the new S-Class has an even better view of the surrounding traffic: In addition, for the first time it makes use of map and navigation data to calculate driving behaviour.

The “Assistance Graphics” menu of the instrument panel shows the driver at one glance which assistance functions he selected and to what situations the systems are currently responding. Unmistakable icons provide him with information on the screen as well in the head-up display. All functions are now controlled from the steering wheel. The new Driving Assistance package includes but is not limited to the following functions: 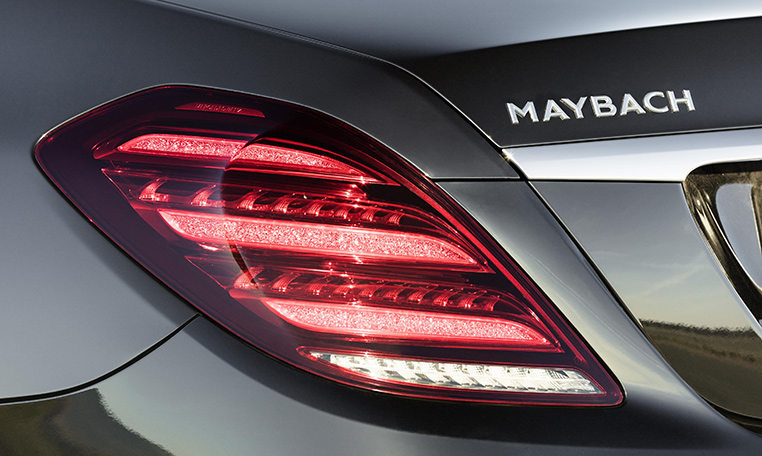 The S-Class made a technological statement of superiority in 2013 with ROAD SURFACE SCAN. The system detects bumps ahead of the vehicle and adjusts the ACTIVE BODY CONTROL suspension accordingly. In the new S-Class this suspension control is further improved: The stereo camera of the system now scans the road even more thoroughly, even in dusk and at speeds up to 180 km/h. Another comfort enhancement is the CURVE curve-tilting function, available in the S-Class Saloon for the first time. The body tilts to the inside of the turn by up to 2.65 degrees and thereby reduces the centrifugal forces perceived by the passengers.

The new infotainment generation also expands the telephony options: With the help of near-field communication, the smartphone transforms into the digital vehicle key and the controller for parking (see above).

Mobile phones can be charged as standard wirelessly and without a telephone holder. In addition, Multifunction Telephony (optional feature) allows connecting mobile phones with the vehicle’s exterior aerial. Wireless charging works with all mobile devices that support or can be retrofitted to support the Qi standard. The charging pad is integrated into the stowage compartment at the front of the centre console. Wireless charging is optionally also available in the centre console in the rear.

The “Business Telephony in the Rear” equipment feature was expanded with additional functions such as connecting a second mobile phone and transferring calls between front and rear passengers. The Bluetooth handset was also redesigned.

Front and rear passengers now have more text messaging options. They can now receive, send, forward and use voice-to-text to dictate text messages. Telephone numbers from text messages and embedded URLs can be used for further actions. The messages are also displayed as pop-ups on the right half of the wide-screen cockpit. Another new feature is the notification by text message if the vehicle is involved in a parking dent. The sensors of the vehicle detect such a situation and trigger a text message being sent to a preset mobile number.

The Burmester® High-End 3D Surround Sound system with a system output of 1520 watts was expanded with a speaker in the overhead control panel and two speakers in the sides.

The new Concierge Service puts a host of individual services at the disposal of Mercedes me connect customers: from making restaurant reservations and obtaining tips about tourist routes, to gathering information on cultural or sporting events and sending navigation destinations directly to the vehicle. Registered users can establish a telephone connection to the Concierge Service in the preset language in 20 countries throughout Europe by pressing the ‘Info’ button on the overhead control panel or via the Mercedes me App. The personal concierge takes care of everything else.