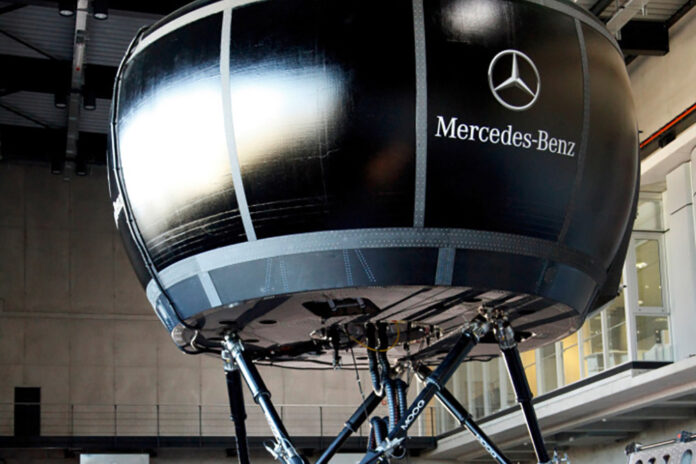 Ten years ago, the most modern moving-base driving simulator of its time commenced operation in the Mercedes-Benz Technology Centre (MTC) in Sindelfingen. With its 360° screen, fast electric drive and a twelve metre long rail for transverse and longitudinal movements, it continues to be one of the most capable facilities in the automobile industry. It allows highly dynamic driving manoeuvres such as lane-changes to be realistically simulated. The driving simulator also plays an important role on the way to autonomous driving. Some of the testing and verification work for the DRIVE PILOT in the new S-Class took place there. The experts in Sindelfingen are also working on the simulator of tomorrow: In the compact XR (Extended Reality) driving simulator developed in-house, the interior functions of future vehicles can be tested flexibly with the help of digital smartglasses.

“Mercedes-Benz has been systematically working towards digitisation in its development and testing for many years. But never before has simulation been as important as now, when it comes to conditionally automated driving,” says Dr. Michael Hafner, Head of Automated Driving at Mercedes-Benz. “A major part of the testing and verification work for the DRIVE PILOT took place in the dynamic driving simulator.” It is expected that from the second half of 2021 the S-Class will be able to drive in conditionally automated mode in situations where traffic density is high or in tailbacks on suitable motorway sections in Germany.

During the virtual testing of automated vehicles, the simulator quickly and efficiently allows many scenarios to be enacted that do not occur in real tests, or not often enough, because they are so infrequent. Moreover, with no physical danger, the safety developers are able to provoke situations in which the driver needs to take over control very quickly. They use the simulator to observe and assess the interaction of the driver, and e.g. measure his/her reaction time.

Hafner: “The best possible development results are obtained from an intelligent combination of modern simulation methods and intensive practical tests. Several million test kilometres in road traffic continue to be an indispensable part of development work. Simulation cannot completely replace real testing, it remains an elementary tool for the development and approval of safety-related systems.”

Numerous simulations are carried out at Mercedes-Benz during the development and testing of new vehicles. “Digital prototypes” of a vehicle created with the help of high-performance computers make it possible to test a new model completely in many driving situations, before the real vehicle even exists. As a result, the actual prototypes attain a higher maturity level more quickly, allowing even more detailed testing.

The future: on the road in the cockpit of future vehicles with digital smartglasses

The next stage in simulator technology is also being tested in the conceptual phase in Sindelfingen: together with their colleagues in the Virtual Reality Centre (VRC), the driving simulator experts at Mercedes-Benz have developed and designed a new XR driving simulator. This is where the real and virtual surroundings blend even more closely than before, hence the designation Extended Reality.

Only very few controls physically exist in this simulator: along with the driver’s seat, these are the steering wheel with touch controls, the pedal cluster and the Start switch. The respective specialist departments supply CAD data sets, UI and function models which are converted into the appropriate software by the simulation experts. This makes the driving simulation centre a “digital vehicle workshop”. The XR driving simulator is the ideal addition to conventional simulators based on the cockpit of a real vehicle. Especially in a very early development stage when there is yet no hardware, the vehicle can already be digitally experienced on the road, in real time, in the XR driving simulator.

To this end, the tester only needs to take a seat and put on the smartglasses. The new simulator allows various interior functions such as display and control concepts or lighting scenarios to be staged in a still early development phase.

For the first time it is also possible to simulate parking situations under laboratory conditions. The level of realism is very high: for example, the view reflected by the exterior and rear-view mirrors changes with the viewing angle. The tester’s eye direction is tracked by the smartglasses, and the mirror image adapted accordingly. The vehicle’s surroundings with other vehicles or pedestrians are also simulated very realistically.

The present: 10 years of the moving-base driving simulator in Sindelfingen

In October 2010 Mercedes-Benz officially opened the moving-base driving simulator in the company’s Technology Centre in Sindelfingen. With its 360° screen, fast electric power system and the twelve-metre long rail for transverse or longitudinal movements, depending on the test setup, the moving-base simulator at Mercedes-Benz is among the most capable in the entire automobile industry.

The real car in the virtual world is a randomly chosen vehicle cab in which the tester takes a seat in the simulator cell. This can be electronically reprogrammed to simulate the behaviour of every current and future Mercedes model. The simulator cell is a hexapod mounted on six moveable supports. As well as the vehicle cab, this contains the projection screen on which road traffic is portrayed realistically with moving pedestrians, oncoming traffic and houses.

The vehicle controls are linked to the computerised controls of the driving simulator by data lines. When the test driver moves the steering wheel or accelerates, these responses are registered by the computer and have the same effects as in real traffic. The scenery shown constantly changes, and the moving base simulates the car’s attitude versus the road surface, e.g. pitching when the driver brakes. The computer calculates the vehicle’s behaviour over 1000 times per second, and sends the corresponding commands to the electrics. It can move the system by up to twelve metres in a transverse direction, at a speed of up to ten metres per second (36 km/h).

In the driving simulation centre, driving tests are carried out in a virtual world. The focus is on the driver and the subjective driving impression. Both external test subjects and specialists are allowed behind the wheel:

Numerous other simulators are used in addition to the moving-base driving simulator. With a ride simulator it is possible to carry out subjective assessments of the performance of digital prototypes driving on uneven roads, for example. To this end, the Mercedes specialists feed the simulator with the surface data of real-life test stretches and the necessary suspension and functional data relating to vehicle models. The driver and front passenger can sit in the two seats on the test rig to carry out purely digital yet realistic test drives. This is because the vehicle seats, which are mounted on a hexapod with electric supports, move as prescribed by the digital prototypes.

Fixed-base simulators do not have a hydraulically or electrically powered motion system, and the vehicle cab is fixed to the floor. Thanks to single or multi-channel projection and the sound systems conveying driving noises, the traffic scenario is nevertheless so realistic that the driver becomes immersed in the virtual world and behaves as if in real-life road traffic. The driving assistance systems are tested in different traffic situations here. Development work is also carried out on interior noise by reference to measured and synthetic noise, and with the aid of expert panels and customer studies.

A realistic impression of active safety systems already installed in production vehicles is provided by the simulator for assistance systems. A virtual test drive becomes an impressive active safety experience when the occupants of the simulator interactively, rapidly and directly experience the current assistance systems in different scenarios at the touch of a button.

Huge Haul of Rare, Obsolete and Impossible to Find Mercedes-...

Lexus Reveals Gamers’ IS – First Vehicle Designed by a...