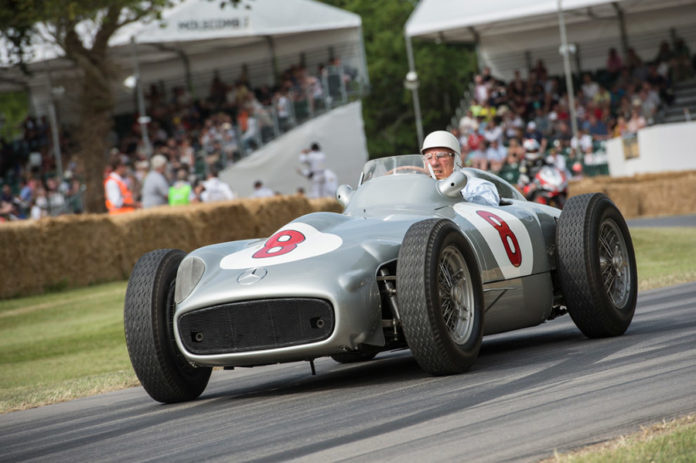 “Mercedes-Benz will keep the memory of a great character and racing driver alive and honoured,” says Christian Boucke, Head of Mercedes-Benz Classic. “Sir Stirling Moss died on 12 April 2020. He was a star of the Mercedes-Benz racing team in the 1955 season. Triumphs such as the overall victory of the Mille Miglia in absolute record time and victory in the British Grand Prix will ensure that his name will forever be closely linked with the motorsport successes of this brand. Thank you, Stirling!”

1 May 1955 in Brescia, Italy. It is 7.22 a.m. A silver racing sports car is given the starting signal and shoots down the ramp: Stirling Moss and his co-driver Denis Jenkinson in the Mercedes-Benz 300 SLR (W 196 S) launched into one of the most important and gruelling road races in the world at the time – the Mille Miglia. No less than 1,000 miles of roads through Italy lie ahead of them, the equivalent of 1,597 kilometres. Their opponents are not merely the 520 other vehicles but, above all, a winding route along public roads and the clock with an unstoppable second hand. In the end, the only thing that counts is the time it takes to cover the 1,000 miles.

After 10 hours, 7 minutes and 48 seconds, the silver 300 SLR with the red “722” painted on it and driven by Stirling Moss crossed the finishing line in Brescia. The start number depicts the starting time, as is usual in the Mille Miglia. This was a sensation: Moss and Jenkinson set a new record time for the thousand-mile race, their average speed on that day was an unbelievable 157.65 km/h. Their time for this legendary road race was never beaten.

“Only Mercedes-Benz could build such a car.”

“It was indeed my greatest victory,” Moss later said. “No other vehicle in the world would have given us the capability to achieve this tremendous speed. Only Mercedes-Benz could build such a vehicle.” Frightened? Definitely before the race, because he knew how fast he had to drive to win, without always knowing the exact course of the road. That’s why it took a co-driver as reliable as Denis Jenkinson with his roadbook instructions recorded on a paper scroll.

Only a few years earlier, in 1948 at the age of 19, Moss had taken part in his first race and finished fourth. He had a passion for motorsport in his genes: his father, Alfred Moss, who was a dentist by profession, and his mother, Aileen, were already active in motorsport in the 1920s and 1930s, and his sister, Pat, participated successfully in rallies and sports car races in the 1950s and 1960s. His second race in Brighton catapulted Stirling Moss right to the top of the podium. In his first year of racing, he contested a total of 15 competitions and finished twelve of them in first place.

This was the launchpad that shot Moss to an international career, which was expanded successfully in 1955 in the Mercedes-Benz works team after several intermediate stations. His contract covered all the major Formula One events and the World Sports Car Championship, and he took part in them in the W 196 R Grand Prix racing car and the 300 SLR (W 196 S) racing sports car. He closed the season as Formula One runner-up behind Juan Manuel Fangio. He also scored decisive points for winning the Sports Car World Championship, which Mercedes-Benz won in 1955 together with the Formula One World Championship. His successes in 1955:

Moss had a tremendous will to win. He said he was always spurred on by one thought in particular: “Today is race day, today I’m going to risk my life.” He always demanded everything from the vehicle – sometimes he crossed the finishing line in a severely battered car, but in first place.

When Mercedes-Benz withdrew from motorsport after the extremely successful 1955 season, the driver’s seats of all the major brands were open to Moss. In subsequent years, he drove various marques, such as Vanwall, Cooper, Porsche, Aston Martin, Ferrari, Lotus and B.R.M. And every season confirmed once again that he was a world-class racing driver. It is true that he never won the Formula One World Championship, but he secured the title of Vice World Champion in subsequent years – as he had done with Mercedes-Benz in 1955: in 1956 and 1957 he was runner-up to Juan Manuel Fangio again and, in 1958, second place behind fellow-Briton Mike Hawthorn. In the years from 1959 to 1961, he took 3rd place in the Drivers’ Championship.

1962 turned out to be a year that changed his life. Moss was under contract to Lotus as a driver. On 30 April, he was participating in a national Formula One race, the 100 Miles of Goodwood. On the 35th of 42 laps, due to circumstances that were never properly explained, he left the track at high speed, crashed into a bank of earth and suffered extremely serious injuries. Although he recovered, about a year after the accident Moss decided to quit motorsport – his physical reactions had deteriorated and were much slower than before the accident. “If you’re not able to drive fast and safely, you should stop, if only out of consideration for your competitors,” he said.

Stirling Moss’s list of successes is truly impressive: in a total of 84 different models of cars, he took part in no less than 495 motorsport events, reached the finishing line in 366 of them and won 222. This record confirms that Moss was one of the best drivers of his time. For his services, Queen Elizabeth II honoured him with “The Most Excellent Order of the British Empire” (OBE) in 1959. In 2000, Moss was also made a Knight Bachelor, meaning he was entitled to call himself Sir Stirling.

Moss was also considered a pioneer of professionalism in motorsport: as early as 1949, he engaged a manager to organise his business affairs. This was a completely new approach because, in this period, most racing drivers looked after their own commitments and negotiated their own fees. From the mid-1960s onwards, hardly any driver could dispense with a manager. The racing teams also worked differently from before and were much more closely involved with marketing partners.

After his active racing period ended, Moss continued to take an active part in motorsport and was a frequent participant in historic racing and rally events. He often took the wheel of “his” Mercedes-Benz 300 SLR in which he won the Mille Miglia and which today is one of the most fascinating vehicles in the Mercedes-Benz Classic collection. It was in exactly this racing sports car with start number 722, that Moss celebrated a reunion in 2015, precisely 60 years after his outstanding triumph, in Italy and on the original Mille Miglia route. On that occasion, he took a retrospective look at a life that had been moving and eventful and summed it up: “I’ve always been proud to be part of the Mercedes-Benz family.”

Mercedes-Benz VISION AVTR: Operating the User Interface with the Power of Though...