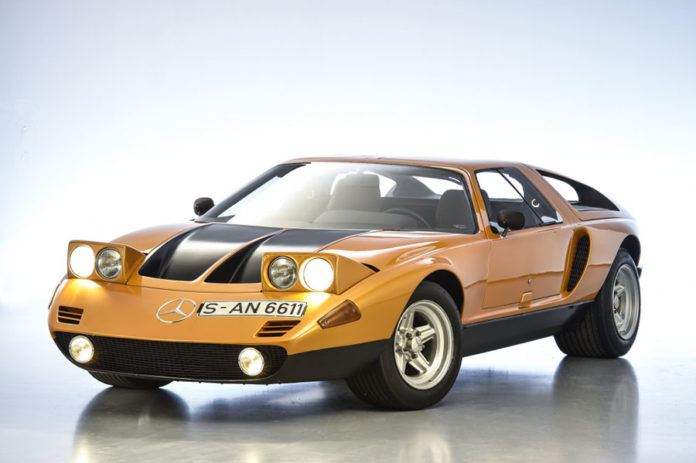 Fascinating sports car icon and media favourite, laboratory on wheels for the development of the Wankel engine and testing new technologies and, last, but not least, legendary record-breaking car: the Mercedes-Benz C 111-II is all this and much more. Its second development stage, C 111-II, featuring the quadruple-rotor variant (four times 602 ccm flow chamber volume) of the M 950 F rotary piston engine generating 257 kW (350 hp) will be celebrating a special anniversary this year.

Premiere: The supersports car was introduced 50 years ago at the 40th Geneva Motor Show between 12 and 22 March 1970. The new, merely 1120-millimetre-high vehicle with gullwing doors and a wheelbase of 2620 millimetres features a glass-fibre reinforced plastic (GFRP) body screwed to the sheet steel underbody frame. Its top speed is 300 km/h. It remains a major public attraction to this day: experience a Mercedes-Benz C 111-II featuring the characteristic “Weissherbst” paintwork at the Fascination of Technology exhibition section of the Mercedes-Benz Museum.

Improved development: The C 111-II was developed on the basis of the C 111, which was presented in autumn 1969. In terms of technology, it is particularly characterised by the quadruple-rotor Wankel engine, a genuine sports engine. The Design department, headed up by Bruno Sacco and Josef Gallitzendörfer, started work in summer 1969. Compared to its predecessor, they improved the driver’s field of vision by modifying the mudguards, roof and boot lid. The vehicle’s aerodynamics were also streamlined: wind tunnel measurement showed that the vehicle’s drag had been reduced by eight per cent compared to its predecessor. The C 111-II’s interior impresses with contemporary aesthetics. The dream car underlines its suitability for everyday use with features such as space for one large and two small suitcases from the Mercedes-Benz suitcase set.

Dream car: The C 111 is a highlight from the outset. Consequently, the plan set out by the Board of Management of what was then Daimler-Benz AG worked out well: its members decided on 20 May 1969 that, as a dream car, the C 111 would be showcased to the public between 11 and 21 September 1969 at the International Motor Show (IAA) in Frankfurt am Main. Following its sensational debut, the C 111 attended numerous other trade fairs and exhibitions: the Paris Motor Show, London Motor Show (October 1969), Turin Auto Show (October/November 1969), Jochen Rindt Show in Vienna (November 1969) and Essen (December 1969), Brussels International Motor Show (January 1970) and Chicago Auto Show (February 1970). The evolved version C 111-II then premiered in Geneva in March 1970.

Blank cheques: Wealthy sports car aficionados are prepared to pay considerable amounts for a C 111. For instance, in London in 1969 an automotive enthusiast already offered to pay up to half a million German marks. Blank cheques were even delivered to Stuttgart over the following months. However, the brand made clear that this experimental vehicle was not for sale. Right at the beginning of its career, what would later be known as the C 111 (with the internal Mercedes-Benz designation C 101) was intended for a totally different target group: as early as 1963 initial thought had been given to a Wankel engine in a “small, affordable sports car” to be positioned below the “Pagoda” SL (W 113). The strategy was defined in more detail in 1968 as a “small, sporty vehicle” without any particular comfort features that is also suitable for rally sports and aimed at “young people”.

Driving experience: Fifty years ago in Geneva visitors were not only marvelling at the C 111-II as an exhibition highlight, they also witnessed it in motion as Mercedes-Benz brought two of a total of five planned experimental vehicles from the second series to the Motor Show. The prototype with internal number 31 and thus the first C 111-II could be experienced as part of the press demonstration on 10 and 11 March 1970 at Circuit de Monthoux near Geneva in demonstration test drives.

Digital: The C 111 had not only been designed with a futuristic shape. It is also the world’s first vehicle that had been completely designed on a computer. For this purpose, engineers used the ESEM method (elastostatic element method), a finite element method (FEM) variant developed at Mercedes-Benz. The digital technology even made it possible to calculate dynamic loads. Mercedes-Benz estimates that the development period was cut by around four months by using this method. The in-house documentary film production “Das Auto, das aus dem Computer kam” (the car from the computer) introduced the innovation.

V8 instead of Wankel engine: December 1970 saw the installation of a Mercedes-Benz 3.5-litre V8 reciprocating engine in the C 111-II instead of the Wankel engine. This Mercedes-Benz Classic vehicle means the C 111 can still be dynamically experienced to this day, as it still attracts attention at events for automotive classics. A C 111-II dating back to 1975 represents a further unique vehicle forming part of the company-owned vehicle collection: its floor assembly consists of a sandwich design with two glass-fibre-reinforced synthetic resin shells with a thickness of only a few millimetres that form a core structure on the basis of polyurethane foam.

Butter and skis: Compared with its predecessor the C 111-II boasted a number of convenient details. This was particularly important to Rudolf Uhlenhaut, head of the Mercedes-Benz Passenger Vehicle Development department. In addition to the regular boot, the vehicle provided space to accommodate one item of luggage on the boot lid, secured by straps, as well as the option to transport skis. Uhlenhaut also put the C 111-II through a practically-orientated “butter test”: in this process, the vehicle is driven quickly while trying to establish whether a pack of butter placed in the boot melts as a result of the combustion engine’s dissipated heat despite the boot’s insulation.

Showing its colours: Nowadays the C 111-II and its predecessor have shaped a public image as vehicles associated with the orange metallic “Weissherbst” paintwork. However, at the end of the 1960s, thought was initially given to “Vermillion” paintwork and rally stripe patterns. In 1969 the C 111 initially premiered with a white special-effect paint and bright orange highlights. Yet, by the debut of the C 111-II in Geneva 50 years ago, the “Weissherbst” paintwork had won out as the characteristic colour.

Record-breaking vehicle: The development of a supersports car featuring the Wankel engine was no longer pursued at Mercedes-Benz after the C 111-II and its equivalent with a plastic floor assembly. However, the star of the experimental vehicles still shines brightly. It formed the basis for the very successful, record-breaking vehicles C 111-II D (1976), C 111-III (1977) and C 111-IV (1979).

Fresh off the press: The “Mercedes-Benz C 111” publication will give new insights into the development of the dream car and record-chasing vehicle. The book will be published soon by Motorbuch Verlag Stuttgart. The publication is based on in-depth research as well as comprehensive, detailed information and photographs from the Daimler AG archives, including many previously unpublished images to document the entire development history of this fascinating vehicle for the very first time.

The Maybach S 650 is the most powerful in the Mercedes-Maybach sedan lineup.
Read more
Automotive News

After three days of filming the result was a dynamic, exciting flight through the museum.
Read more
Feature Videos

Sir Stirling Moss died on 12 April 2020. He was a star of the Mercedes-Benz racing team in the 1955 season.
Read more