The McLaren Sabre is one of Mecum Monterey 2022’s main attractions and will cross the block on Friday, August 19th. 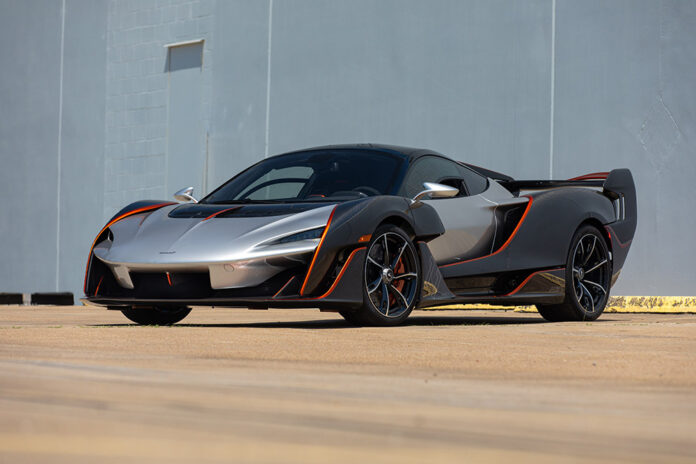 McLaren Sabre chassis number 11, which has rarely been seen in public, heads to Mecum Monterey 2022, to be held this Aug. 18-20 in Monterey, California. Designed specifically for the United States market as an MSO commission through McLaren Special Operations (MSO), the McLaren Sabre is a show car for the road – featuring one-of-a-kind design and performance attributes expected of a McLaren, combined with a surprisingly compliant suspension that makes even the longest of road trips enjoyable.

Boasting the most powerful non-hybrid McLaren twin-turbo V8 engine to date and a 7-speed dual clutch transmission, the Sabre has 824bhp and 590lb-ft of torque, with a maximum speed of 218 mph, making it the fastest-ever two-seater McLaren. The active rear air diffusers, McLaren’s first ever, limits drag on the straights while going into downforce mode under braking. The hydraulic steering is a McLaren staple, while the suspension is more compliant than typically found in Ultimate Series supercars – an intentional decision matching the hypercar’s road-first priority.

Car and Driver magazine were suitably impressed when they got behind the wheel:
“The response from this version of McLaren’s V-8 is mind altering, the first dip into full throttle rearranging scenery quicker than the mind can process. The Sabre is so fast, so visceral, that there are moments when your right foot will question whether full throttle is what your brain really wants.”

The ultra-exclusive McLaren Sabre is a pinnacle example of what is achievable through the MSO Commissions program.

MSO’s Commissions program begins with a blank sheet of paper, and from there, in close collaboration with the customer, a journey begins that leads to the realization of an extraordinary vision. An exceptionally close partnership between MSO’s Commissions team and its customers allows for the development of a unique synergy, seen from the drawing board all the way to the road, and beyond into the ownership experience.

The MSO Commissions customer experience includes a close working relationship with the development team, including designers, engineers, and test drivers. Each of the 15 hypercars were individually hand-built in a dedicated facility in Woking, UK, and each customer took part in a personal one-to-one spec session to help ensure that the finished car exactly matched their personalized vision. Sabre customers also enjoyed an unprecedented private test drive of the prototype car on track at the Thermal Club in Palm Springs.

“We have never created a vehicle like Sabre before – one that perfectly embodies MSO’s core values of cutting edge innovation, peerless performance and modern craftsmanship,’ said Nicolas Brown, President of McLaren, The Americas. ‘And never before have we allowed anyone to be so intimately involved with the development of one of our vehicle programs. It’s a truly special program to be part of, and a truly special car to own.”

“Given this car’s ultra-exclusive nature, its top-tier design and build quality, along with this stellar example’s unique features and low miles, it’s going to be a thrilling experience to watch it cross the auction block in Monterey in search of its next dedicated owner,’ Mecum Vice President of Consignments Frank Mecum said. ‘We’re excited to welcome it into our 600-vehicle lineup as a headlining feature of our Monterey 2022 auction.”

By breaking design, engineering and aerodynamic conventions, MSO has succeeded in creating Sabre – a true show car for the road.