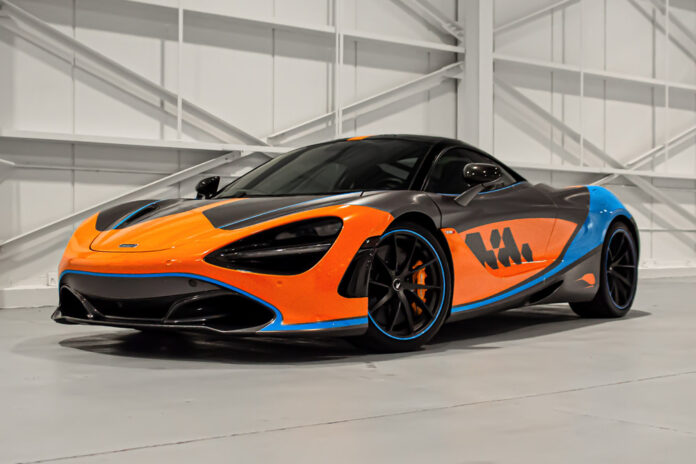 McLaren Automotive and McLaren Racing are joining together to make the inaugural Formula 1 Miami Grand Prix an unforgettable weekend for fans and customers alike. To support the introductory race in Miami on Sunday, May 8, 2022, five McLaren 720S supercars have been personalized in a McLaren Racing livery-inspired wrap and will be used throughout the weekend for a variety of activities including the Pirelli Hot Laps, competition in the Celebrity Race, and display at the McLaren Hospitality Suite.

Inspired by the livery designs of all three McLaren Racing teams – Formula 1, Extreme E and INDYCAR – the wrap features bold Fluro Papaya (orange) with an accent of new Blue. McLaren is known for its distinctive Papaya orange – dating back to the 1967 Can-Am season when team founder Bruce McLaren first used it.

Given that McLaren Automotive was born on the racetrack, the McLaren Racing-inspired livery is a natural fit on the 720S supercar, representing the culmination of innovation from the entire McLaren brand. McLaren Automotive, founded in 2010, is a creator of luxury, high-performance supercars, and every vehicle is hand-assembled in Woking, Surrey, England. McLaren Racing was founded by New Zealand racing driver Bruce McLaren in 1963. The racing team entered its first Formula 1 race in 1966, and since then has won 20 Formula 1 world championships, more than 180 Formula 1 grands prix, the Le Mans 24 Hours at its first attempt, and the Indianapolis 500 three times.

The McLaren 720S offers the widest breadth of dynamic capability of any McLaren, from controlled comfort to extreme handling prowess. At the heart of the 720S is a 4.0-liter twin-turbocharged V8 that produces 710hp and 568 lb ft of torque; 0-60mph takes only 2.8 seconds, while 0-124mph is reached in a blistering 7.8 seconds. In addition to its rapid acceleration and top speed of 212mph, the 720S delivers outstanding driver engagement, with a new generation of McLaren’s active chassis system, Proactive Chassis Control II and double the aerodynamic efficiency of its Super Series predecessor. Prices starting from $299,000 (USD).