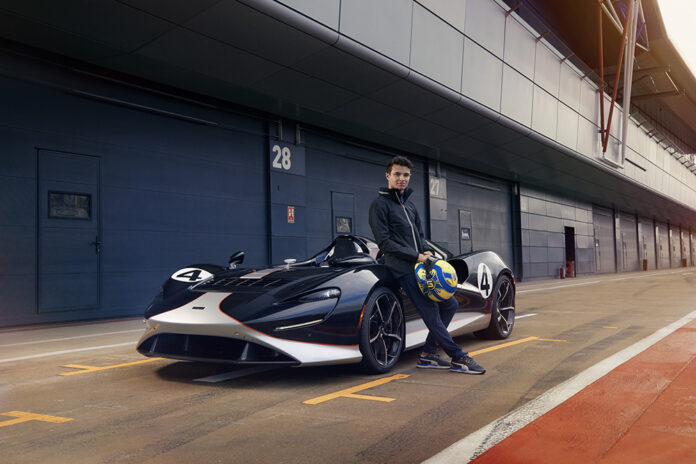 As the new McLaren Elva reaches the final stages of its testing and development programme ahead of the first customer deliveries later this year, McLaren Racing’s rising star Lando Norris demonstrates the exhilarating experience at the wheel of this exclusive car at Silverstone, home of the British Grand Prix.

The latest product in the McLaren Ultimate Series line, the Elva is designed to give the purest distillation of driving thrills. With an 815PS twin-turbo V8 engine powering the lightest McLaren Automotive car yet, the Elva is capable of ferocious acceleration and handling that is both exploitable and accessible. Transforming the driving experience is the innovative Active Air Management System (AAMS), which provides a virtual canopy over the Elva’s seamlessly-integrated cockpit, creating a heightened sensory experience further enhanced by a stirring soundtrack from the car’s finely-tuned exhaust.

McLaren Automotive Chief Test Driver, Kenny Bräck has overseen the Elva’s test and development programme and it is his team that has honed the Elva into the most exhilarating McLaren Automotive product yet. Kenny demonstrated this characteristic to great effect at Goodwood SpeedWeek, with a lap of the Goodwood Motor Circuit that showcases the car’s considerable pace and playful handling capabilities.