Celebrates Senna’s win at the 1989 Formula One Mexican Grand Prix. 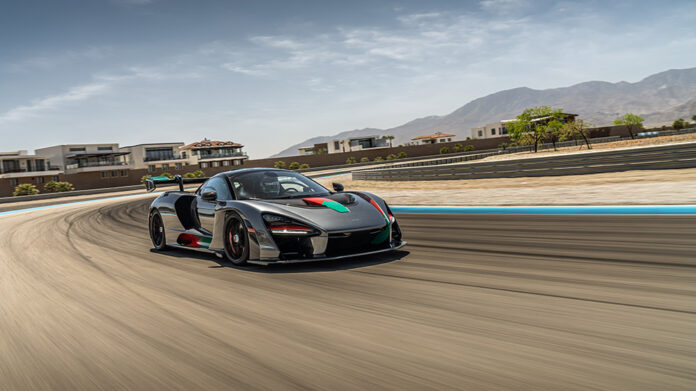 McLaren Beverly Hills debuts its fourth and final McLaren Senna XP tribute car: El Triunfo Absoluto (in English, The Absolute Triumph). The customer-led bespoke commission through McLaren Special Operations (MSO) celebrates Ayrton Senna’s masterful racing achievements and was inspired by three previous McLaren Senna XPs in the same vein: Master of Monaco – a tribute to Senna’s six impressive wins at the iconic street circuit; Lap of the Gods, which highlights one of his greatest victories at Donington Park in the UK in 1993; and Home Victory, which pays homage to his incredible first ‘home win’ in Brazil in 1991.

El Triunfo Absoluto celebrates the 1989 Formula One Mexican Grand Prix, where Ayrton Senna led from pole position and secured the championship lead with his third straight win of the season.

Arrow McLaren SP IndyCar driver, Pato O’Ward, recently got behind the wheel of El Triunfo Absoluto, seen in a new video. On May 1, 2022, O’Ward scored a spectacular victory at the Grand Prix of Alabama, and movingly dedicated his race win to Ayrton Senna, who sadly passed on the same day back in 1994. Now O’Ward heads to the iconic 106th running of the Indianapolis 500 on May 29th with the yard of bricks in his sights.

“You commit yourself to such a level where there is no compromise. You give everything you have; everything, absolutely everything.” – Ayrton Senna

Debuted as the ultimate road-legal track car, the McLaren Senna’s limited production run of 500 units were sold out before the first customer car was built. McLaren’s XP cars are traditionally even rarer, typically being factory experimental prototypes and test cars that are re-built to individual customer specifications after the model program is completed. This particular car was used for press activity in the United States before it was sent back to the UK in 2021 to be rebuilt, explaining why this car is only now being delivered to its proud owner.

The hypercar is finished in Graphite Grey paint, and features a remarkable livery painted in Accent Red and Mexico Green on the roof scoop, front service panel and sides, inside front fenders, door lowers, front light sockets, front and rear wheel arch vanes, and rear bumper. Also featured is an exposed Gloss Visual Carbon Fibre (VCF) Ayrton Senna signature on the driver’s side in front of the light socket, which is clearly visible on the front of the car. On the door lowers there is an exposed Graphite Grey ‘Senna XP’ logo, and the Graphite Grey rear wing end plates are painted with a ‘1’ in Anniversary White. The rear wing upper is a hand-painted flying Mexico flag, which is painted in Mexico Green, Anniversary White, and Accent Red with exquisite detail.

On the front fender in stencil effect reads ‘EL TRIUNFO ABSOLUTO’, expressing the name of the McLaren Senna XP theme.

Inside, the full MSO Bespoke Jet-Black leather interior is complemented by the seat pad outers which are embroidered with a double stitch in Pure White and Bright Red. The headrest pads are also exquisitely embroidered with the Mexican Flag and ‘EL TRIUNFO ABSOLUTO’ embroidered underneath. The standard interior VCF areas are replaced with a beautiful Green Tinted Gloss VCF, and further distinct features include the MSO Bespoke painted door struts painted in Anniversary White, Galvanic Grey brushed and polished interior brightwork, MSO Bespoke door sills, and MSO Bespoke Extended Carbon Fibre Sills with a uniquely airbrushed depiction of Ayrton Senna on the podium in 1989. The finishing touches of the interior are further enhanced with subtle signature details such as a MSO Bespoke steering wheel with Green Tinted Gloss VCF Upper and a special 12 o’clock marker of a Triple Centre band which is painted in Mexico Green, Anniversary White, and Accent Red; a MSO Bespoke accelerator pedal which is laser-etched with the Mexican Grand Prix 1989 race track layout; and a MSO Bespoke dedication plaque etched with ‘EL GRAN PREMIO DE MEXICO DE 1989’.

The McLaren Senna is the most track-focused, road-legal car offered by the McLaren brand to date. It has a 4.0-liter twin-turbocharged V8 engine that produces 789bph and 590 lb ft torque for 0-60mph in 2.7 seconds and 0-124mph in a blinding 6.8 seconds.