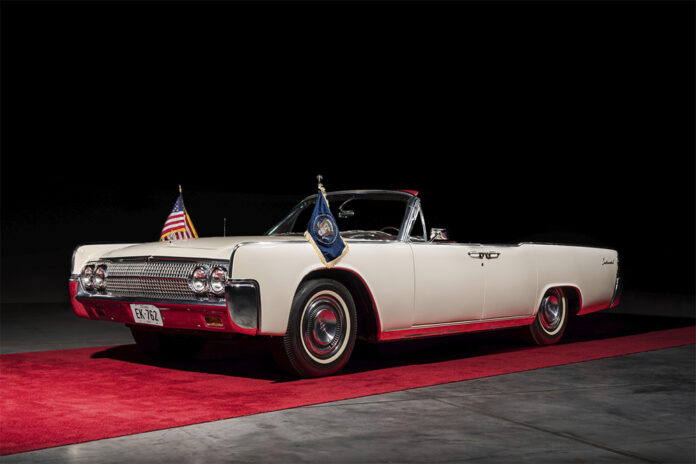 “Limo One”, a white 1963 Lincoln Continental Convertible, the final automobile to safely carry President John F. Kennedy on the morning of November 22, 1963 in Fort Worth, was the winner in the Bonhams American Presidential Experience Auction in New York on Wednesday, 14 October, selling for $375,075, the top lot of the sale.

Another lot that won the Bonhams bidders’ votes was President Kennedy’s original government-issue Air Force One Bomber Jacket Given to David Powers, which achieved $250,075 in the saleroom.

Loaned as an official vehicle denoted ‘Fort Worth Limo’ for the Kennedys’ visit to the city, the Lincoln drove the President, the First Lady and Texas Governor John Connally from a breakfast at the Hotel Texas Ballroom in Fort Worth, where Kennedy delivered his last speech, to Carswell Air Force Base where they boarded their flight to Dallas on the morning of November 22, 1963.

Numerous photographs show the President, the First Lady and Texas Governor John Connally being driven past waving crowds in the white Lincoln, which was loaned by Bill Golightly, of Golightly Auto Sales, as an official vehicle for the Presidential visit.

The limousine has had its engine replaced and body and paintwork restored, but most of the interior, including the red leather seats, is original.

The limousine was offered from the American Presidential Experience Collection, sourced from the eponymous traveling educational exhibition, founded by entrepreneur Jim Warlick, which has toured the USA for more than 20 years. The collection formed the centrepiece of the sale.

Darren Sutherland, Senior Specialist, Bonhams Fine Printed Books and Manuscripts, said: “We are delighted with the sale of this historically important automobile. There was so much excitement and interest surrounding it, and we’re pleased it generated much enthusiastic bidding.”

An original U.S. Government issue G-1 flight jacket, with a sewn patch of the Seal of the President of the United States over the right breast, which was originally owned by President John F. Kennedy and gifted to David Powers circa 1962-1963.

Officially known as the President’s ‘Special Assistant’, Powers was a close friend of President Kennedy and often referred to by White House colleagues as “John’s other wife.”

After President Kennedy’s death, Bobby Kennedy appointed Powers as the shepherd of the Kennedy legacy and first curator of the JFK museum when a nascent collection travelled the world in 1965, until his retirement from the JFK Library in 1994.

The Bonhams American Presidential Sale was conducted as a hybrid ‘live and online auction’, with a live auctioneer on the rostrum at the Bonhams New York saleroom in Madison Avenue. The auction was live streamed to a worldwide audience of bidders, via the Bonhams website, with bids accepted via telephone, online and by absentee bids, in accordance with current local guidelines regarding COVID-19.