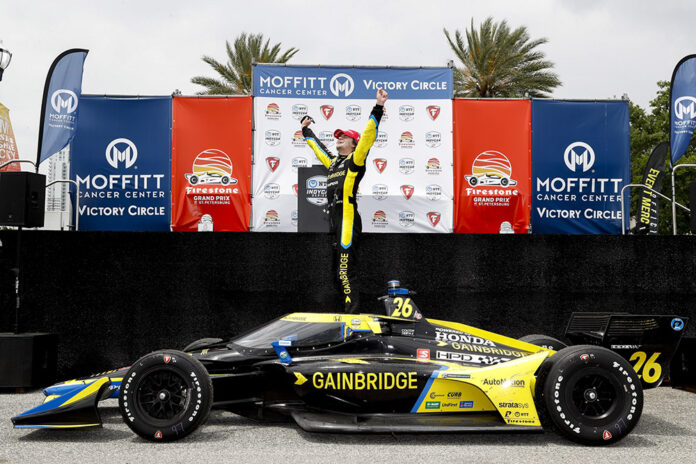 Colton Herta continued Honda’s early-season winning streak in the 2021 NTT INDYCAR SERIES, with the Andretti Autosport driver starting from the pole and leading a race-record 97 laps en route to victory in the Firestone Grand Prix of St. Petersburg.

The win is the second for Honda in as many races this season, following Alex Palou’s victory in last weekend’s season-opening Honda Indy Grand Prix of Alabama.  Starting on the outside of the front row, Honda-powered Meyer Shank Racing’s Jack Harvey battled the Team Penske duo of Josef Newgarden and Simon Pagenaud in the middle stages of today’s 100-lap contest to finish fourth for Honda.

Today’s results move Herta to fourth in the Drivers’ Championship standings, five points behind Palou; while Honda increased its lead in the Manufacturers’ Championship to 30 points (178-148).  Meanwhile, defending series champion Dixon backed up his third-place result at Barber with fifth today, leaving him just two points behind his Chip Ganassi Racing teammate Palou.

“What a great job by everybody, my team, Gainbridge, Honda.  Sorry, I can hardly talk, I’m so winded.  I’m so happy that we did this, so happy that we rebounded from Barber [where an opening-lap crash sent him behind the wall for several laps for repairs].  We’ve now got the momentum we need [to contend for the championship].  I was nervous [following a late-race restart] because Josef [Newgarden] is so good around here and was on [Firestone alternate] ‘Red’ tires, but it turned out to be similar [to Herta’s primary-compound ‘Black’ tires], so I was able to hold him off.  Oh man, I can’t even speak right now.  So happy to be powered by Honda, and my team, they did a hell of a job.” – Colton Herta

Jack Harvey (Meyer Shank Racing Honda) started 2nd, finished 4th: “I think we had a solid day.  Any time you start on the front row, you want to finish on the podium.  So [finishing fourth] is slightly disappointing.  But it was a solid result, and that’s what we needed to start the year off properly.  We’re just so close to [a qualifying] pole position and podium finish now, we just need to keep working hard and the results will come.  We were racing with some of the best drivers on the grid, and that’s where we want to be. I just want to win.”

Kelvin Fu (Director, Program Management, Honda Performance Development) on today’s Honda victory at the Firestone Grand Prix of St. Petersburg: “Two wins, from two different Honda drivers and teams, is just a fantastic way to start Honda’s season in the NTT INDYCAR SERIES. It’s great to see a pair of young drivers – Alex [Palou] and Colton [Herta] – come to the fore and end up on the top step of the podiums at Barber and St. Petersburg. And encouraging to see Jack Harvey and Meyer Shank Racing have another strong run as their effort continues to improve.  Now we’re excited to head to Texas for our first ovals races of the year, in what should be a preview for an exciting Month of May and Indianapolis 500.”