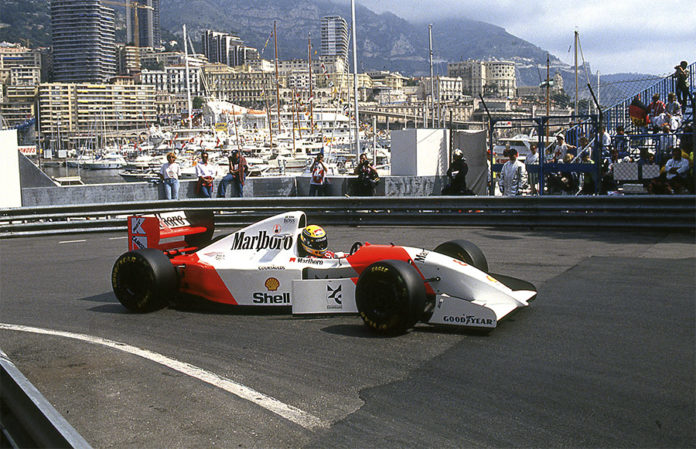 The ex Ayrton Senna, record-setting, final Monaco Grand Prix-winning, 1993 McLaren-Ford MP4/8A Formula 1 racing single-seater is to be offered at Bonhams Monaco sale on 11 May and will be on view at Le Grand Palais, Paris on 6-8 February.

This startlingly well-preserved, running-order Formula 1 car won the 1993 Monaco Grand Prix – 25 years ago – in the hands of the legendary Ayrton Senna. The Brazilian three-time Formula 1 World Champion Driver, rated by many as the greatest of all time, won a record six editions of the prestigious round-the-houses Monaco Grand Prix. 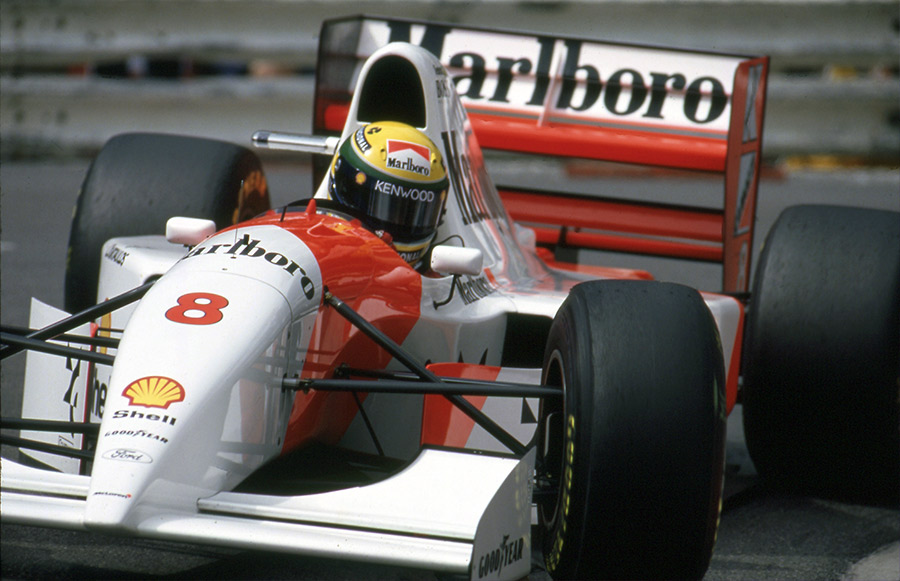 The 1993 season was Senna’s last with McLaren. The great team had just ended its long and successful partnership with Honda for engine supply, and would link up with Peugeot in a new Formula 1 racing partnership from 1994. For the interim 1993 season, a last-minute agreement had been struck with Ford to run their Cosworth-built ‘HB’ V8 engines on loan. Ayrton Senna was initially sceptical that these compact Ford V8 engines would be able to compete with the dominant Renault V10s as deployed by the Williams team, led by the Brazilian’s former team-mate and deadly rival Alain Prost.

Senna consented to remain with McLaren on a race-by-race basis, in return for a rumoured $1M fee for every start. However, the team’s latest McLaren-Ford MP4/8A model – like chassis ‘6’ now being offered by Bonhams – demonstrated such technological and mechanical sophistication that by season’s end, it was one of the most competitive of all contemporary Grand Prix car designs. 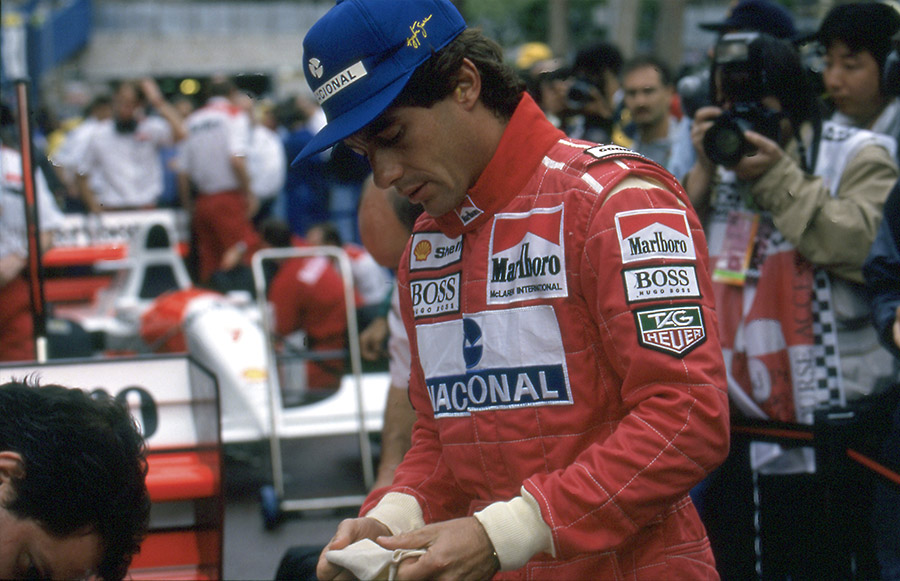 For the following Monaco Grand Prix, he experienced an apparent problem with the car’s ultra-modern ‘active’ suspension system during qualifying which sparked a violent crash into the barriers at Ste Devote corner.

The incident unfolded so suddenly that even Senna was unable to let go of the steering wheel in time, and the impact painfully injured his thumb. Chassis ’6’ was then repaired in time for Saturday running, and he qualified third fastest behind Prost’s Williams-Renault on pole and Michael Schumacher’s Benetton-Ford second. Prost then jumped the start, incurring a 10-second stop-go penalty, to be served in the pit lane. Schumacher then led the race from Senna until lap 33, when the Benetton-Ford retired with hydraulic failure. Senna promptly took control of the race, 15 seconds ahead of Damon Hill’s Williams-Renault. As the great Brazilian took the Monaco chequered flag for his sixth time, he broke Graham Hill’s record for the most Monaco GP victories, set back in 1969. 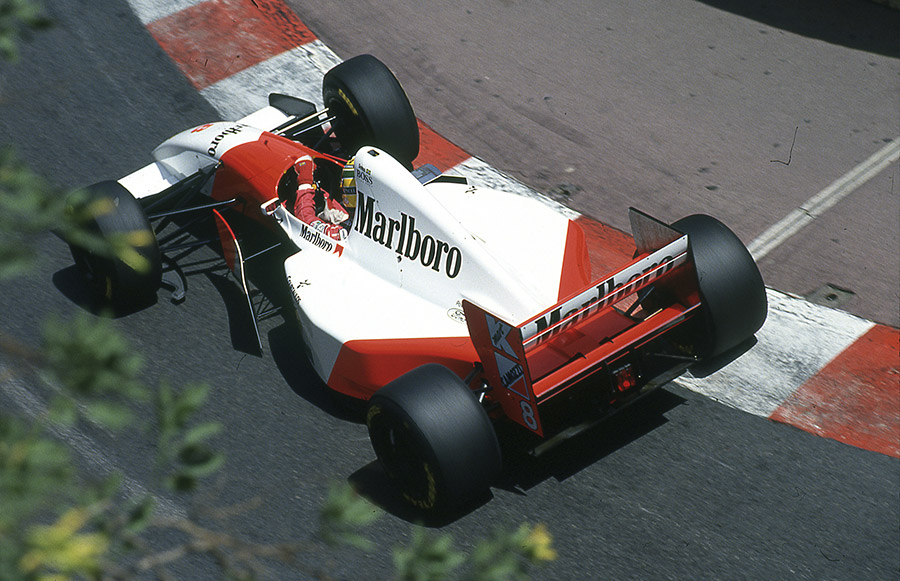 This McLaren MP4/8A was raced again by Senna in that year’s Canadian, French, British, German, Belgian and Italian GPs, finishing 4th at Magny-Cours (France), Hockenheim (Germany) and Spa-Francorchamps (Belgium). At Silverstone in the British GP, Senna looked set to finish 3rd, only to run out of fuel in the closing stages, being classified 5th. Chassis ‘6’s frontline career was then completed as spare car at both the 1993 Japanese and Australian Grands Prix.

Mark Osborne, Bonhams Global Head of Motorsport, commented: ‘Ayrton Senna was the most charismatic Grand Prix car driver of the modern era, and the MP4/8A was the car with which his team, McLaren, surpassed Ferrari as the most successful team in Formula 1 World Championship history. This particular chassis, number 6, cemented Senna’s legend as The Master of Monaco. We at Bonhams are both honoured and thrilled to be presenting one of the most significant Grand Prix cars of all time. It is his Monaco winner, it is a runner, and now it could be yours.’ 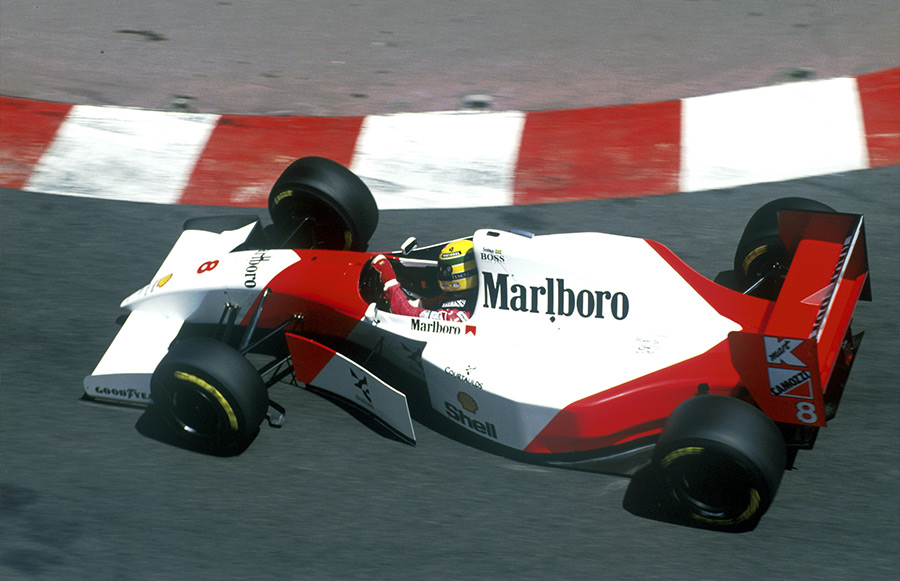 Bonhams is delighted to offer this iconic ex-Ayrton Senna, Monaco Grand Prix-winning Formula 1 McLaren-Ford upon the 25th anniversary of its record-breaking Monte Carlo victory. With this success, McLaren toppled Ferrari from its throne as contemporarily the most successful marque in World Championship Grand Prix racing. Yet another landmark achievement for this wonderfully iconic, magically charismatic, truly historic racing car.

Previous articleWalter Röhrl Celebrates His Silver Anniversary with Porsche
Next articleWant to Feel Good? Forget Romance, Get a Sports Car

What Was Senna’s Bizarre Formula 1 Technique About?

With a price tag of $3.4m it's the most powerful non-hybrid McLaren ever
Read more