By: Bonhams | Phoptos Courtesy of: Bonhams 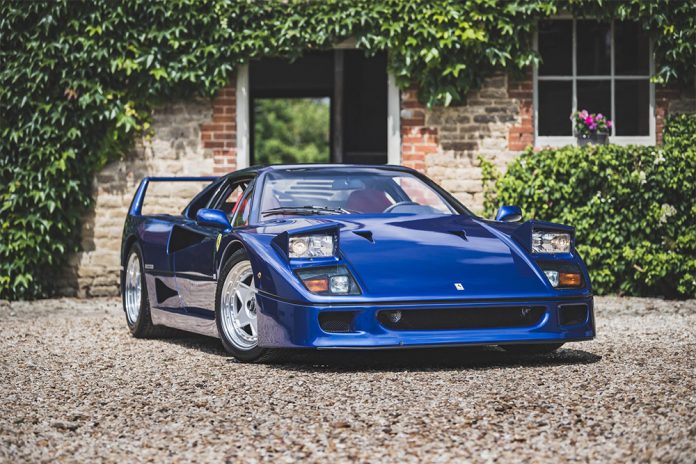 A 1989 Ferrari F40, which had become a worldwide social media star due to its ultra-rare blue livery, has sold for £1,000,500 on The Market by Bonhams, the first seven-figure result for an online platform in the UK and Europe.

Offered by Sam Moores, creator of the popular Car Chat podcast and Instagram star, who commissioned the Aqua Blue metallic paintwork from Carrozzeria Zanasi of Maranello (approved by Ferrari), the Classiche-certified F40 had covered a mere 16,000 miles from new and was sold with its private registration number F40 BLU.

The hammer fell after a four-way bidding battle drove the price past the seven-figure mark in the final hour of the seven-day continuous online auction.

The F40 is the first million-pound motor car to be sold on The Market by Bonhams, one of the leading and fastest-growing online marketplaces for classic and collectable car and motorcycle auctions.

Founded in Oxfordshire in 2016, The Market has taken the industry by storm. In 2020, the company sold vehicles with a total value of £13 million and increased its turnover by almost 300% compared to 2019. It was acquired by Bonhams in April this year.

Tristan Judge, Director, The Market by Bonhams, said: “We are thrilled with this result. Not surprisingly, the F40 was the subject of a lot of attention and activity, with 15 bidders submitting a total of 128 bids.

“This car was one of only a handful of blue examples in existence and while many collectors favour tradition – such as a red-liveried Ferrari – this sale indicates there is a younger generation of serious collectors who appreciate something different.”

Maarten ten Holder, Managing Director of Bonhams Motoring, said: “We are delighted with this sale which shows that Bonhams is now able to offer and successfully sell the most coveted collectable motor cars around the clock, and not only at our flagship events.”