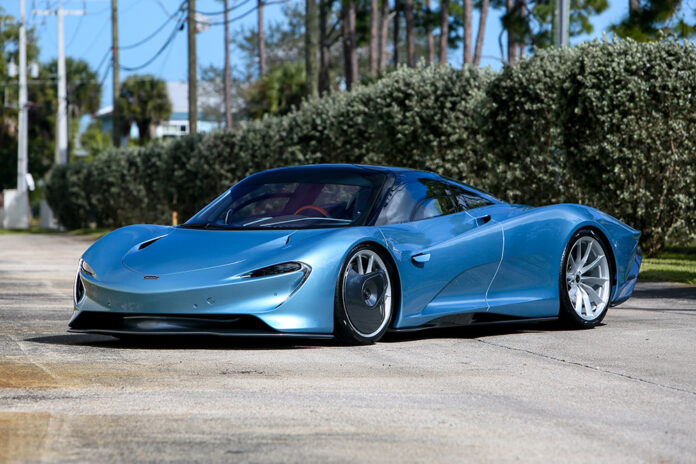 When unveiled to the global public at Monaco’s Sporting Club on 28 May 1992, the McLaren F1 was heralded as the ultimate development of a roadgoing supercar. Collectors and critics alike fawned over the F1’s distinctive design, revolutionary construction, and record-breaking performance. Nearly 30 years on, the McLaren F1 is still the undisputed pinnacle of any collection fortunate enough to retain one of its 106 examples produced between 1992 and 1998.

Yet technology is constantly progressing, and a company like McLaren certainly cannot afford to rest on its laurels; to do so would not be in its character, to say nothing of its long-term interest. Drawing on the spirit of the F1, and incorporating everything the Woking, England-based automaker has learned in the intervening decades, the 2020 McLaren Speedtail once again pushes the automotive envelope. Limited to just 106 units, the same as its predecessor the F1, the futuristic Speedtail is an exclusive offering on the cutting edge of 21st century hypercar performance.

This Speedtail offered here is the 87th example produced, and it is finished in the striking MSO color combination of Heritage Gloss Steel Blue over Semi-Aniline Metallic Blue Silver leather. It was ordered new by the consignor via Miller McLaren of Greenwich, Connecticut in March 2020, and was the second Speedtail imported to the United States.

The car’s accompanying sales order shows an original MSRP over just £2 million, with nearly £262,000 in bespoke optional equipment from McLaren Special Operations. In a fitting tribute to the Speedtail’s place as the spiritual successor to the F1, this car’s stunning exterior color is a direct homage to F1 chassis number 036, which was originally commissioned by former McLaren majority shareholder and company director, Mansour Ojjeh.

A comprehensive suite of polished Zircon trim, aluminum, titanium, and visual carbon fiber flourishes add a uniform appeal to this Speedtail’s unique exterior and interior themes. As highlighted by its accompanying order form, the set of silver painted brake calipers are housed within the matching set of Gloss Silver-finished wheels. The distinctive “speed covers” on the front wheels are fashioned of 1,000-strand gloss visual carbon fiber, which exactly matches the appointment of the engine bay surround and rear contrast panel. The car’s exterior badging is handsomely rendered in machined aluminum, as is most of its elegant brightwork.

Inside its next-gen cabin, the carbon fiber steering wheel is appointed with a touch of contrasting McLaren orange leather; it fronts a suite of five digital displays, and the two elements are interceded by a pair of billet titanium paddle shifters.

It is safe to say that the revolutionary Speedtail’s saga is only getting started; like its predecessor the F1, the Speedtail is predicted to capture the public’s attention for decades to come. With each of the 106 examples being purchased by pre-selected customers before the model’s announcement, the availability of this Speedtail, number 87, offers an exciting opportunity to partake in the most advanced roadgoing vehicle that McLaren has built to date. The Speedtail is an engineering triumph combining the best of McLaren’s past with extraordinary technology of the present. Its moment in the spotlight has just begun.

This vehicle is in the U.S. under a “show or display” exemption. It is imperative that any transfer of ownership be approved by NHTSA prior to the title changing hands. The seller will work with the buyer to ensure all limitations are understood and that compliance with the current “show or display” requirements are met. Buyers should be aware that the vehicle is limited to use of no more than 2,500 miles per year and must be made available for inspection by NHTSA until the vehicle is not less than 25 years old.