Chassis number one – will then be presented to its lucky owner 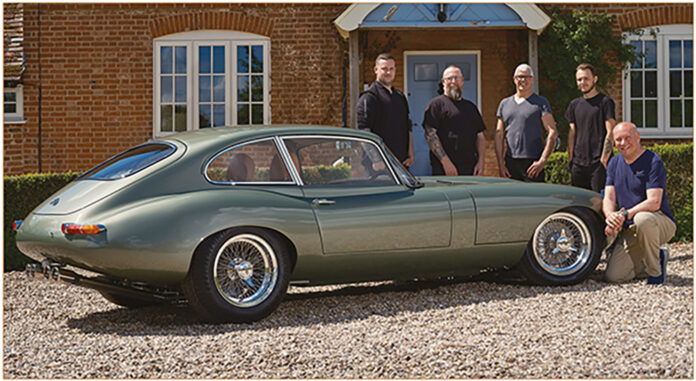 A brand-new design by renowned engineer Neville Swales of Building the Legend Limited is set to make its public debut at the London Concours, which returns to the Honourable Artillery Company from 8-10 June. The very first example of this spectacular V12-powered Jaguar E-type homage – chassis number one – will then be presented to its lucky owner at the E-type 60 celebrations at Shelsley Walsh on Saturday 12 June.

From small beginnings in his workshops in Coventry, Neville Swales creates meticulously engineered and beautiful sports cars. His first were inspired by Jaguar’s 1966 XJ13 prototype – a car originally designed to take on the might of Ford and Ferrari at Le Mans, but the single original example built by Jaguar was destined to never turn a wheel in anger. Assisted by surviving members of the original team who created this masterpiece in 1966, Neville’s first recreation of the XJ13 was a finalist in the 2016 International Historic Motoring Awards, where it stood shoulder to shoulder against icons such as the 1966 Le Mans-winning Ford GT40 and the 1956 Le Mans-winning Jaguar D-type.

It has since been joined by a very limited number of customer cars built to the same exacting standard and, aiming to push the boundaries of automotive restoration even further, Neville’s journey continues with cars powered by his own unique interpretation of Jaguar’s legendary quad-cam V12 ‘XJ13’ engine – the tera® V12. Also taking inspiration from period offerings from Ferrari, Matra and Lamborghini, the tera® V12 is the type of power unit that could have been heard howling down the Mulsanne Straight at Le Mans in 1966 and beyond. An engine that should have powered Jaguar’s range of sports cars and saloons if circumstances had allowed.

Capable of running on the new generation of carbon-neutral ‘green’ fuels, the tera® V12 is a beautifully sculptural engine that will be heard for many years into the future, as the world responds to its environmental challenges. Neville’s mission with his latest car is to celebrate the purity of the iconic Series 1 E-type design, and combine it with the excitement of the tera® V12 engine, which is available in 6.1-litre (372 cu in) or 6.8-litre (415 cu in) form.

Beginning in the E-type’s 60th anniversary year – and 50 years since the V12 Series III E-type was introduced – only 24 of these cars will be built. Working with one of the UK’s foremost coachbuilders, each one will be a unique rebody and reinterpretation of Jaguar’s Series III V12 E-type in coupé, roadster or ‘low drag’ race-car form.

Although the first four cars in the series are already spoken for, a total of six cars will be delivered each year over the next four years. Built in Coventry, each one combines uncompromising hand-crafted production standards with advanced modern technology and bespoke interiors, and succeeds in regaining the purity and elegance of the early E-types – an elegance that was lost as the series evolved over the years.

All will be built to the exact specification requested by the owner – with a vast range of options, plus body styles and detailed finish limited only by their imagination – to create unique works of automotive art that will never be replicated.