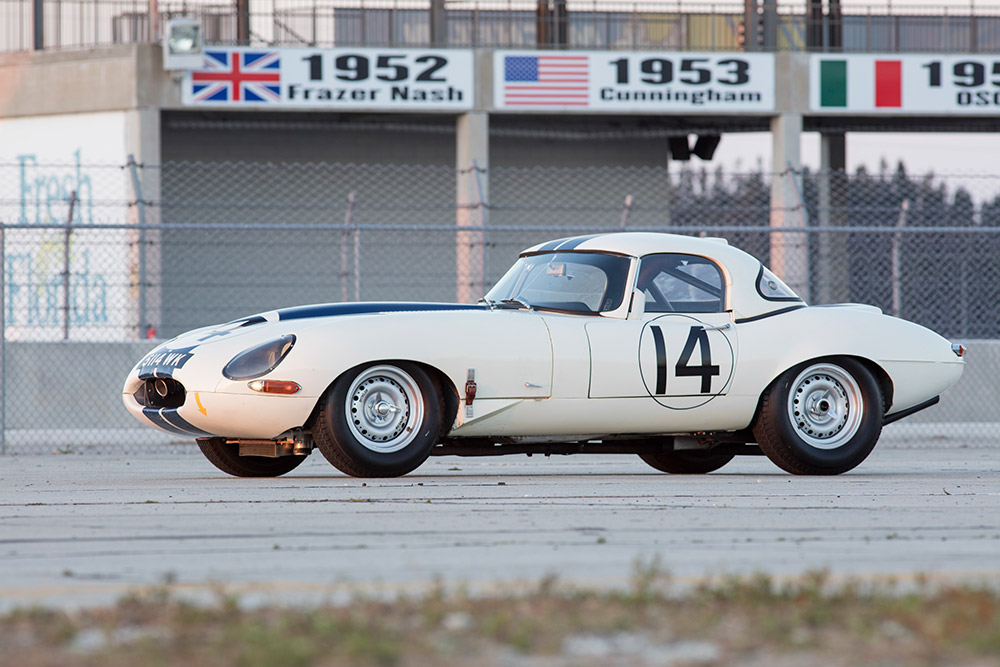 One of the most important early racing Jaguars – a 1963 E-Type Lightweight Competition, owned and raced by the giant of US motorsport, Briggs Cunningham – will be in pole position at the Bonhams Quail Auction, leading the collector cars crossing the block in Carmel on August 19.

Boasting impressive competition history as an official Cunningham team car, driven by champion drivers Augie Pabst and Walt Hansgen at Le Mans, this highly original E-Type Lightweight is among the most important examples of the rare competition model. The car returns to Quail Lodge, having been successfully sold at the Bonhams sale five years ago.

With the resounding success of the Jaguar D-Type in sportscar racing, not least in the 24 Hours of Le Mans, its successor was also destined for a career on the racetrack. Work started on the original E-Type (E1A) in 1957, evolving into the E2A racing development prototype which was campaigned in the French endurance race by Cunningham in 1960.

The already successful racing driver and team owner was involved at all stages of the car’s racing development, fielding an E-Type coupé at Le Mans in 1962, in which Roy Salvadori achieved fourth place.

A year later, Cunningham was offered early examples of the evolutionary E-type Lightweight Competition designed to meet the challenge posed by the Ferrari 250 GTO. A mere 12 cars were built with aluminum alloy bodies and an aluminum hardtop for added strength, with their 3.8-liter competition engines upgraded with Lucas fuel injection, and featuring modified chassis.

Known as GTO Killers, the Lightweight Competition cars were sold exclusively to preferred customers of Jaguar’s managing director, Lofty England, including Cunningham who acquired three, the second of which was the motorcar offered. Officially despatched on June 7, 1963, this E-Type, chassis S850664, was equipped with a four-speed gearbox for its debut in that year’s 24 Hours of Le Mans, with Cunningham’s champion drivers, Walt Hansgen and Augie Pabst, at the wheel.

Qualifying 14th, the E-type was nevertheless forced into early retirement by gearbox failure. However, with the desirable five-speed ZF gearbox later fitted at the Jaguar factory, the Lightweight was driven to an 11th overall finish for Cunningham by Hansgen and Paul Richards at the Road America 500 in September 1963. A 4th-place finish by Richards at the Bridgehampton 500 followed a week later.

After this brief competition career, the Jaguar was retired to Cunningham’s well-known museum in Costa Mesa, California, before being owned by a string of respected collectors including Sir Anthony Bamford, Paul Vestey and Adrian Hamilton in the UK.

Having been significantly restored in the late 1980s, the Lightweight campaigned in historic races in the 1990s and was presented at other prestigious events, including the 1999 Goodwood Festival of Speed and 2001 Le Mans Legends, over the next decade.

The rare E-Type, which retains its factory-issued aluminum coachwork and matching-numbers alloy engine, now returns to Bonhams Quail Auction where it was acquired by the vendor – a prominent collector of important sports and racing cars – five years ago and is offered with a comprehensive history file.

It has been fastidiously maintained to highlight its 1963 Le Mans appearance and is ready for immediate use at premium vintage racing events and concours d’elegance worldwide. (Full catalogue description here: Bonhams : 1963 Jaguar E-Type Lightweight Competition Chassis no. S850664 Engine no. RA 1349-9S). Refer to department for estimate.

“We are so privileged to be offering this exceptional Jaguar for the second time at Quail, which is the perfect star for our silver anniversary sale.

“Such a well-documented and historically significant sports-racer would crown any collection, warranting the serious attention of Jaguar enthusiasts far and wide.” – Jakob Greisen, Bonhams Head of US Motoring

The 25th edition of the Bonhams Quail Auction takes place at the Quail Lodge & Golf Club in Carmel, California on Friday August 19 as a live auction, with telephone, internet and Bonhams app bids all welcome.

All lots will be available to view at the Bonhams Pavilion at Quail Lodge’s West Field on Wednesday August 17, 9am to 6pm; Thursday August 18, 9am to 6pm and Friday, sale day, from 8.30am.