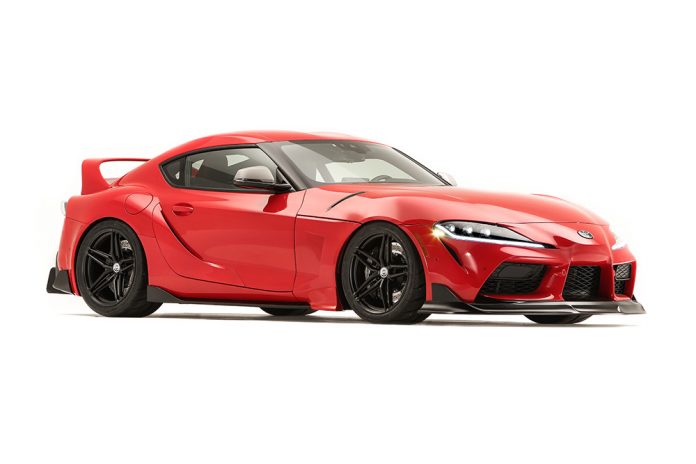 The Toyota GR Supra Heritage Edition, which debuted at the 2019 Specialty Equipment Market Association (SEMA) Show, returns to the show floor along with its companion car, the GR Supra Sport Top. Both are located in Central Hall, Booth No. 24800 and are expected to be fan favorites once again.

“The original MKIV Supra is considered by many to be one of the most desired vintage Supra models, and we wanted to pay tribute to its legacy,” said Lisa Materazzo, group vice president – Toyota Division Marketing. “Our team’s approach was to give a serious nod to the legendary A80 while doing justice to the great lines and performance of the new A90.”

In order to conceive the Heritage Edition Supra, the Toyota Motorsports Garage worked with Beree Cox Design to render a prototype design based on the GR Supra that paid homage to the MKIV Supra’s visual cues. From there, it was off to the races to blend the “old” with the new.

Lead builder, Marty Schwerter searched for headlights and taillights that would work with the GR Supra’s modern body lines yet resemble those on the MKIV Supra. He ultimately chose to go with custom light buckets with lenses CNC machined from blocks of acrylic.

When the GR Supra Sport Top debuts at its first live in-person SEMA Show alongside the GR Supra Heritage Edition, attendees will finally get to see GR Supras inspired by the MKIV side by side. Fixed roof rigidity and simplicity or a removeable roof to take in the sun or the stars? This year, SEMA concept car fans don’t have to choose.

SEMA Provides Chance of a Lifetime for Businesses to Reach New Heights with Laun...