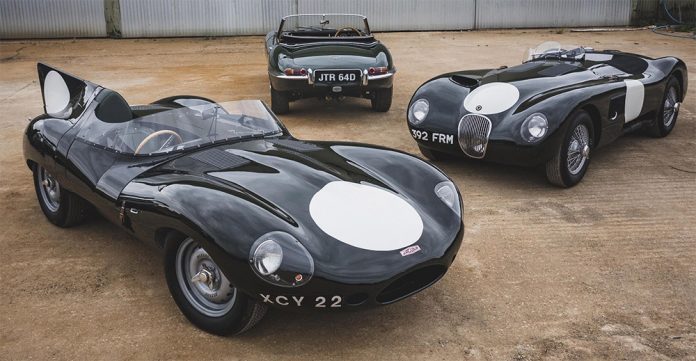 A rare trio of the most evocative Jaguars produced– mirror-image recreations of the legendary C and D-Type racing cars and a 60s sensation E-Type – is offered by The Market fresh from long-term ownership in The Swann private collection.

XKC 051 was driven to victory by the Boys’ Own duo of Duncan Hamilton and Tony Rolt, respectively a former RAF pilot and Colditz alumnus, at an average speed of 108.85mph, despite their alleged all-night pre-race drinking binge, prompted by their mistaken belief that they had been disqualified.

Engineer and Jaguar enthusiast Roy Swann encountered the famous C-Type in the 1980s in the Bagshot showroom of Duncan Hamilton and fell in love with it. However, not having the necessary £600,000 to buy it, he was inspired to create his own replica, which was hand-built by Le Mans Sports Cars.

Alongside the recreation in the Stoke-on-Trent workshop was the original, serving as a template and reference point. The replica even has parallel vertical ribs running down the rear section, fitted onto the original after a 1953 track test to damp down shuttle shake, and its 3.4-litre straight six Weber twin carb engine was tuned from new to match the performance of the 1953 original.

A second tribute to a Le Mans legend is the 1960 Jaguar Lynx D-Type, based upon XKD 505 in which ‘Golden Boy’ Mike Hawthorn and Ivor Bueb took the chequered flag at the Circuit de la Sathe in 1955 – a bittersweet victory overshadowed by the tragic crash which killed driver Pierre Bouillin and 83 spectators.

The D-Type was an out and out racing car compared to the more usable, all-rounder C-Type, built on an aerodynamic aluminium monocoque tub rather than tubular chassis, with its distinctive ‘shark fin’. Powered by 250bhp 3.4-litre straight-6 engine delivering a top speed of 190mph the D-Type went on to win the next two Le Mans races.

This hand-built Lynx replica was assembled to the highest standards by expert craftsmen and is cosmetically and mechanically an impressively faithful recreation of the D-Type in most respects but has a more powerful 3.8 straight-6 engine and a fibreglass fin and rear section.

Roy Swann bought the car in 1995 from John Markey, racing driver and expert C and D-Type replica constructor, who in turn had bought the Lynx as a kit, with the registration donated by a 1960 Jaguar 240 saloon. It has covered circa 3,700 miles in total and requires recommissioning. Its estimate is also £120,000 – 180,000 – a far cry from the £16 million last paid for an original D-Type.

While these two sportscars evoke the glamour and excitement of 1950s racing, the third is a symbol of the Swinging 60s, an E-Type Series 1 4.2, from the glory year of 1966, calling to mind London’s Soho and the King’s Road. However, this example spent the first twenty years of its life in the USA and Canada, delivered new to New York as a left-hand drive variant. Converted to right-hand drive, it was imported to the UK and subject to a full mechanical, structural and aesthetic restoration.

The restored E-Type caught the attention of the vendor at the 1995 Goodwood Festival of Speed, who commissioned a final fettling to make the car ‘as new’. Since restoration, it has covered a mere 1,300 miles. As the other cars of this important trio, the E-Type has had little use in recent years and so will require recommissioning for the road. It has an estimate of £90,000 – 120,000.

Tristan Judge, Director, The Market by Bonhams, said: “We are thrilled to be able to bring these three remarkable Jaguars from The Swann Collection to auction. Each car carries its own charm and desirability, blending raw driving pleasure with attainability. They will no doubt hold a certain level of envy for each of the lucky new owners”.

The Swann Collection trio is available to view by appointment at The Market HQ near Abingdon, Oxfordshire and all auctions are currently LIVE on https://themarket.co.uk/ with the E-Type listing ending next Tuesday 29 June, the D-Type the next day, and the C-Type on 1st July.