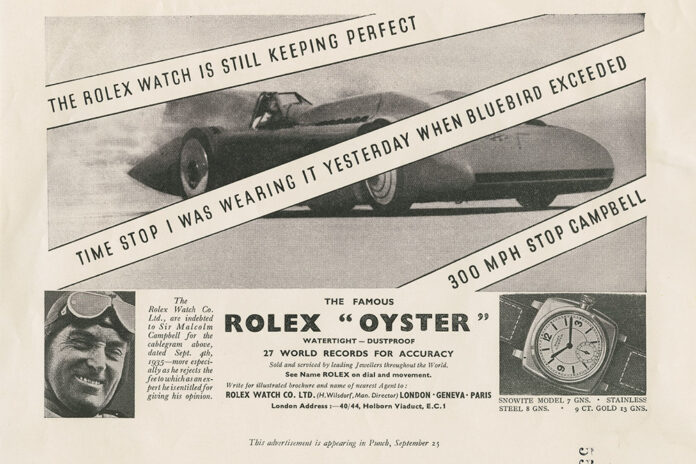 There is a natural affinity between Rolex and motor racing, a sporting field in which the Swiss watch brand has been deeply involved for almost a century. The relationship started in the 1930s when one of the fastest drivers in the world, Sir Malcolm Campbell, chose to wear a Rolex during his record-breaking feats. In 1933, when Sir Malcolm reached a record speed of 272 mph (438 km/h) at Daytona Beach behind the wheel of his legendary car Bluebird , he did so with an Oyster on his wrist.

Endorsing the watch’s capabilities after testing its precision and durability, Sir Malcolm reported back in a telegram to Rolex: “Rolex watch worn yesterday during record attempt and still going splendidly notwithstanding rough usage received.” In March 1935, Sir Malcolm set what would be the fastest speed on the shores of Daytona, reaching 276 mph (445 km/h). That very same year, he went on to break the much sought-after 300 mph barrier (483 km/h) at the Bonneville Salt Flats, Utah. Continuously pushing the boundaries of human endeavour and technology, Sir Malcolm became Rolex’s first motor sport hero, paving the way for the next generation of racing drivers to strive for the ultimate performance.

Since then, Rolex’s relationship with Daytona and its presence in motor sport has grown steadily, embodied by the eponymous Oyster Perpetual Cosmograph Daytona. Rolex formalized its partnership with Daytona International Speedway® in 1992 when the brand became Title Sponsor of the Rolex 24 At DAYTONA, having supported the endurance race since its inception in 1962. The twice-around-the-clock contest demands accuracy, dedication and perseverance from drivers and teams to achieve the perfect balance between speed and reliability. The 2022 event marks 60 years of this prestigious North American race, as well as Rolex’s 30th anniversary as Title Sponsor, and will take place from Saturday 29 to Sunday 30 January 2022.