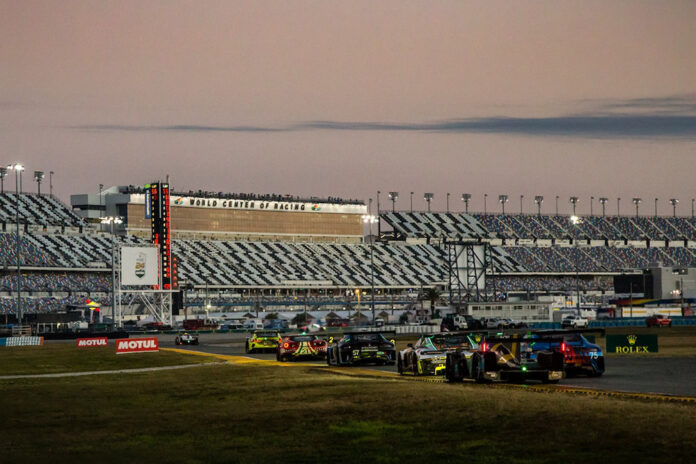 The 2022 Rolex 24 At DAYTONA marks the diamond jubilee of one of motor sport’s most fabled races. From Saturday 29 to Sunday 30 January, an impressive field of 61 cars will compete in this annual race against the clock. In a year of milestones, North America’s endurance epic celebrates 60 years of exhilarating action at the Daytona International Speedway®, while Rolex observes its 30th anniversary as Title Sponsor. This relationship between Rolex and Daytona dates back even further to when Sir Malcolm Campbell, the so-called King of Speed, set five World Land Speed Records at Daytona Beach, the fastest in 1935 behind the wheel of Bluebird with a Rolex Oyster on his wrist.

From the mid-1930s to the 1950s, the oval Daytona Beach-Road Course captured the hearts and minds of spectators and competitors. Then, in 1959, the ambitious plan of William France Sr. to build a new 4 kilometre (2.5 mile) permanent racetrack became a reality and racing moved to Daytona International Speedway®. The inaugural edition of the historic endurance race took place in 1962 and what was initially a three-hour contest soon became the 24-hour race of today. Rolex has supported the event since the early 1960s and went on to name one of its most iconic watches after this temple of motor sport. As part of the forthcoming 60th anniversary celebrations, the speedway will honour previous champions, including Mario Andretti, Hurley Haywood and Scott Pruett, as well as the machines which carried them to victory.

“The testament of time is present in various aspects of the Rolex 24. For me personally, having raced there on 24 occasions, and having won it many times, the excitement never grows old. Now celebrating the 60th anniversary, reliving the legacies that looped this track, I keep coming back to the Champion’s Creed: ‘It’s all about the watch’. Rolex and the 24 hours at Daytona are synonymous, as they continuously stand the test of time, showcase perseverance and hold fast to tradition.” – Scott Pruett, five-time overall winner of the Rolex 24 At DAYTONA

The 2022 Rolex 24 At DAYTONA will act as the IMSA WeatherTech SportsCar Championship’s curtain-raiser, and will be preceded by the now well-established Roar Before The Rolex 24 which returns this week. From Friday 21 to Sunday 23 January, drivers will have the opportunity to familiarize themselves with the challenging 5.73 kilometre (3.56 mile) circuit, whose tri-oval banking was originally designed to maximize speed and offer spectators superior viewing. This three-day preview event will culminate in a 100-minute qualifying race to determine the starting grid for next week’s Rolex 24 At DAYTONA.

This exacting test of skill and endurance pushes drivers and their cars to the limit, requiring teams to pull together through a possible 800 laps, or more, during the twice-around-the-clock marathon. It is not so much a race against the ticking hours, but rather a movement through which driver and machine seek to embrace the flow of seconds, to push ever further, and capture that elusive moment when they are perfectly in tune.

Along with the prestige of winning the race, the drivers who complete the greatest number of laps in 24 hours will receive an engraved Oyster Perpetual Cosmograph Daytona. Speaking about how it feels to triumph over 24 hours, Rolex Testimonee, endurance racing legend and nine-time 24 Hours of Le Mans winner, Tom Kristensen, says:

“In design and presence, the watch is more than just a name; it’s an identity that reflects a successful race and a successful time in a driver’s life. When you get to the top step of a podium, you see your teammates for the first time in the 24 hours and, together, you are full of the happiness, joy and relief. It’s a really important moment and the watch means a lot to the winners of these races.”