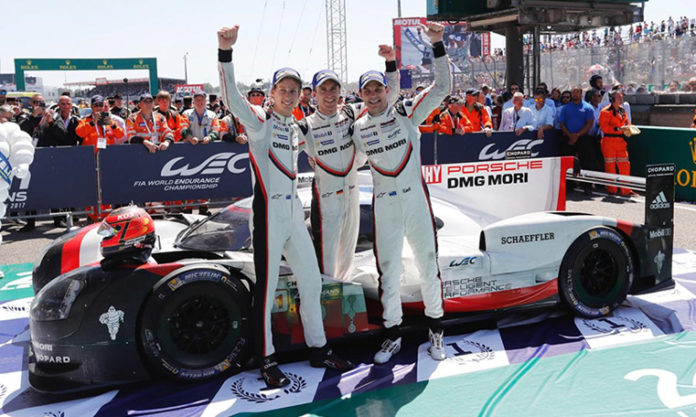 At the 85th running of the 24-hour race drivers Earl Bamber, Timo Bernhard and Brendon Hartley have brought home the Porsche 919 Hybrid in first place after a race full of drama.

At 18:30 on Saturday evening the Le Mans 24-Hours looked over for the Porsche 919 Hybrid of Earl Bamber (NZ), Timo Bernhard (DE) and Brendon Hartley (NZ). Their car had no front axle drive anymore, was repaired for 1.05 hours and rejoined the race 18 laps behind. But the 85th running of the endurance classic in Le Mans produced such dramatic changes that the impossible ultimately came true: After an enormous effort, the trio sliced through the field from 56th position to overall victory. For Le Mans record holder Porsche, it is the 19th overall win in the world’s toughest race and the third in a row meaning the German manufacturer can now keep the famous trophy. 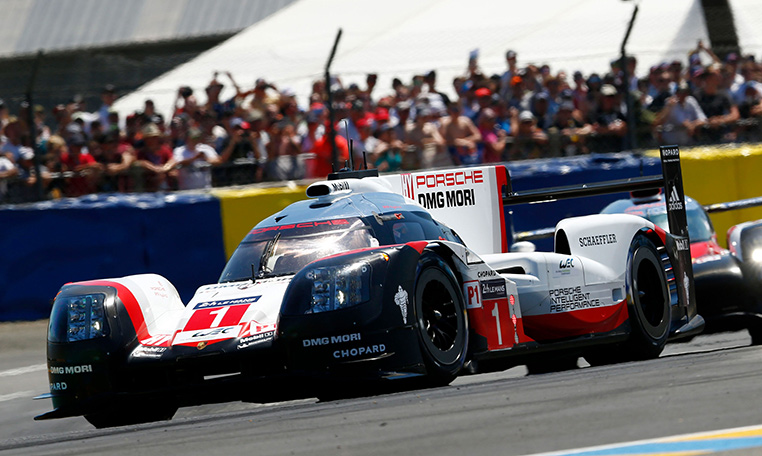 For Earl Bamber it is his second Le Mans overall win at the wheel of the Porsche 919 Hybrid after 2015. Timo Bernhard also scores his second Le Mans overall win. Following on from his maiden win in 2010 when he was loaned to Audi, he had dreamed to repeat it one day with Porsche. Brendon Hartley was arguably the hungriest of this year’s six Porsche LMP works driver squad as his name had yet to be engraved onto the big trophy. 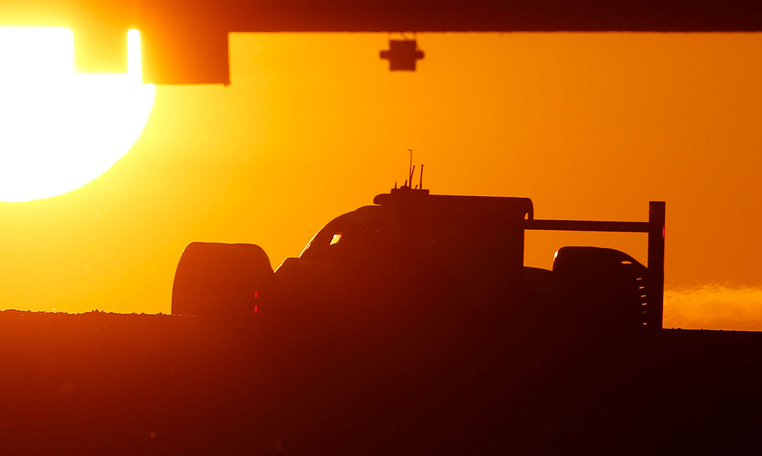 How the final phase went for car number 2

When the number 1 sister car stops on track soon after 11am after having led the race for more than ten hours, the time for the hunters had arrived. Hartley continuously improves during a multiple stint. After 312 laps, he comes in for his final refuelling stop then after 325 laps he hands over the car in fourth position to Bernhard. At 12:50pm, the 919 Hybrid is back on the same lap as the leading car – it is race lap 330. After all LMP1 hybrid works cars have either retired or been delayed, an LMP2 leads outright. After 338 laps Bernhard comes in for fuel and on lap 347 he takes the lead. His penultimate refuelling stop is after 351 laps before a final splash & dash after 360 laps. After 367 laps in total Bernhard takes the chequered flag to fulfil a dream. 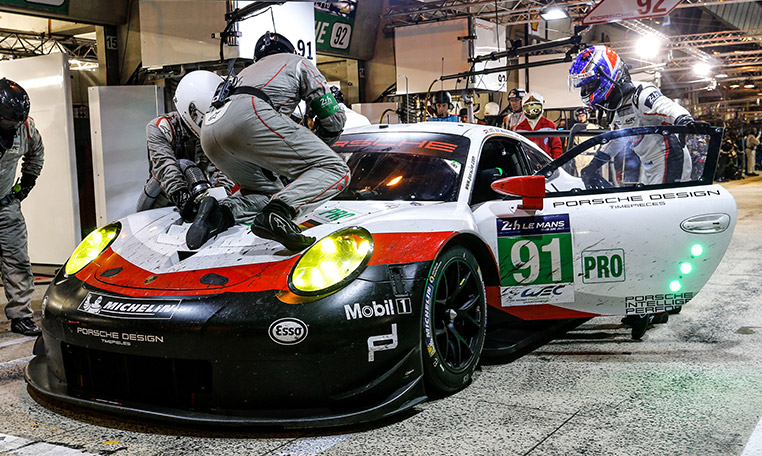 With an admirable debut at the Le Mans 24 Hours witnessed by 258,000 fans, the new Porsche 911 RSR demonstrated its potential and reliability. The race car led the field over long distances and was on course for a podium result until shortly before the flag. However, after 340 laps full of thrills and drama on the legendary 13.629-kilometre Circuit des 24 Heures, Richard Lietz (Austria) and his French teammates Frédéric Makowiecki and Patrick Pilet had to settle for fourth place in the fiercely cutthroat GTE-Pro class. An additional pit stop due to tyre damage an hour before the finish robbed them of all hopes in achieving a podium spot at the toughest automobile race in the world. 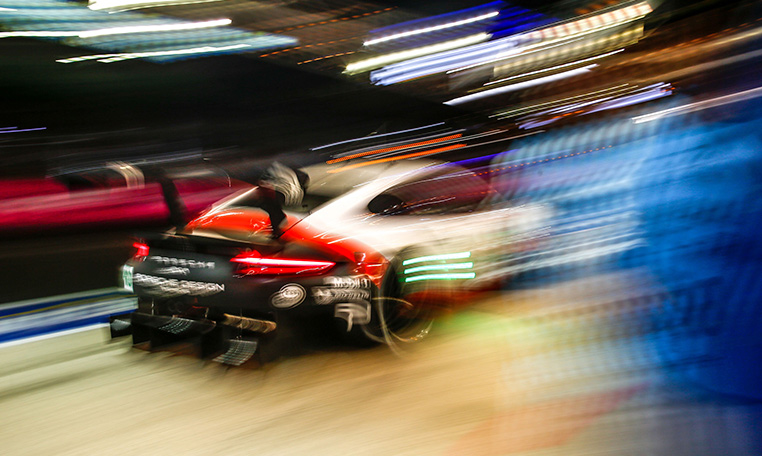 In glorious summer weather and temperatures of around 30 degrees Celsius, 60 vehicles were sent on their way at 15.00 hours on Saturday in the 24-hour chase in the department of Sarthe in western France. The two new 911 RSR, which were fielded for the first time at Le Mans by the Porsche GT Team, completed the first third of the race with any major problems. The only incident on the Circuit des 24 Heures, which throws very special challenges at drivers with its combination of a permanent racetrack and normal national roads, was when the #92 Porsche 911 RSR became entangled in a collision. In the ultra-fast corner 1, it was hit by a competitor and had to return to the pits. Prior to this, Michael Christensen (Denmark), Kévin Estre (France) and Dirk Werner (Germany) had at times been running in second place. Thanks to a perfect race strategy and fast pit stops, the time that was lost was virtually recovered. Their charge, however, was finally halted during the night: After 179 laps and the occasional stint in the lead, Michael Christensen (Denmark) lost control of his 911 RSR while kerb-hopping in the Ford chicane and crashed into the barriers with the rear of his car. 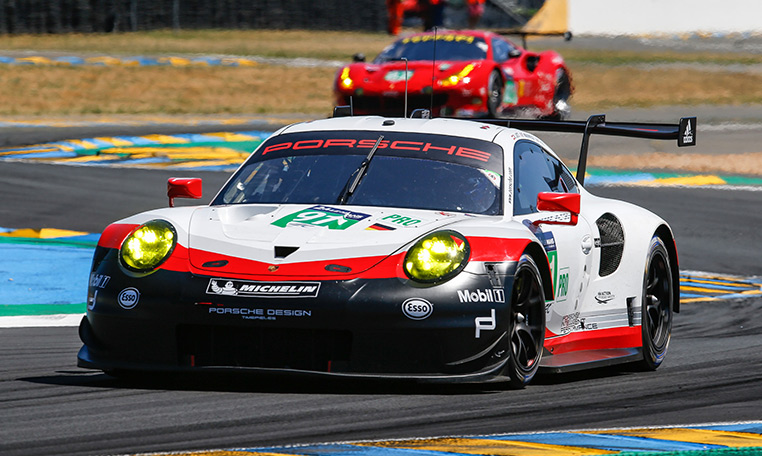 Shortly before the end of the race, Frédéric Makowiecki was running in third place

In the second half of the race, however, their teammates in the #91 Porsche 911 RSR took up the leadership role. On Sunday morning, Patrick Pilet moved into the top position of the very strong GT field for the first time, with Richard Lietz and Frédéric Makowiecki also turning laps at the lead over long distances. In the final stages of the race, all signs looked promising for at least a podium result. With one-and-a-half hours to go before the flag, Frédéric Makowiecki was running in third place. And this is how the race might have ended had a puncture one hour before the end not forced the vehicle back into the pits for an unscheduled pit stop. The fight for the podium was lost.

In the GTE-Am class, Porsche customer teams fielded four 2015-spec 911 RSR. The best result was secured by the 911 campaigned by Dempsey Proton Racing in sixth. Sharing the cockpit of the #77 car was Porsche Young Professional Matteo Cairoli (Italy) with the German racing drivers Christian Ried and Marvin Dienst.