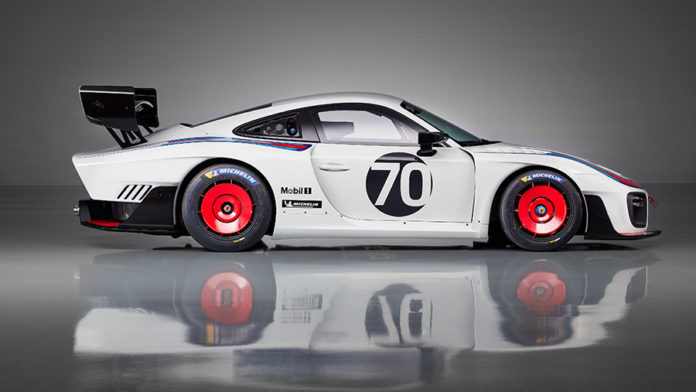 Porsche has once again managed to break the boundaries of the automotive industry with the new astonishing piece of engineering art called Porsche 935. With the shell of the Porsche 911 GT2 RS, an incredible high-performance car itself, the Porsche 935 pays homage to the original 1978 Le Mans race car.

Better known as “Moby Dick,” the original Porsche 935 was one of the Porsches’ most successful cars due to its performance, aerodynamic design, as well as looks. Unlike the number of cars made in recent years that tried to recapture the spirit of the original, and failed, the Porsche 935 has not only managed to live up to the name but also improve upon it.

Porsche 935 comes with a price tag of just under 1 million dollars (including spare parts, shipping, etc.), and in all honesty, that’s quite a big number. However, if you ever get the chance, with only 77 Porsche 935s made, to experience this car, you will be taken aback. Porsche 935 is worth every penny, and here’s precisely why.

The heart of the Porsche 935, better known as the engine is a 3.8-liter six-cylinder twin-turbo engine that produces 700 horsepower. The engine, as well as the transmission, are closely identical to the high-performance engine and transmission found in the 911 GT3 RS. However, the twin-turbo found under the hood of the Porsche 935 produces a unique sound; A sound I wish every road-legal turbocharged car made.

When Porsche 911 GT3 RS first came out, we thought that a car like that could not be any lighter, and of course, Porsche 935 weighs 300 pounds less than the vehicle it was based on (The 911 GT3 RS). Porsche 935 weighs 3000 lbs, and it’s made almost exclusively out of carbon fiber, with every non-essential feature stripped off. Interestingly enough, the AC system was kept in, but only because the windows are made out of plastic, due to weight reduction, and they can’t be rolled down. In fact, Porsche 935 was so stripped down that the door only weighs a few pounds, with the only feature being a mirror adjustment knob.

Equipped with race-dedicated Michelin slicks that can keep the car on the ground, almost as if it was on train tracks, and durable Brembo steel racing breaks; The Porsche 935 stops on a dime. Found on the back of the car is a massive wing designed for downforce, and that might just be it. Porsche 935 doesn’t even come with door locks; it doesn’t even have a trunk. Now you might ask, does a car stripped down of almost every feature looks good?

Simply put, the Porsche 935 is breathtakingly beautiful. The engineers at Porsche didn’t have to follow any regulations, as the Porsche 935 is just a track car; It’s not dedicated to any racing competitions. Because the engineers had the creative freedom to express themselves and design a vehicle without restrictions, we now have a car that isn’t just a copy of the original, but a car that has set a new standard in the automotive industry.

Offered with the Porsche 935, to cover the carbon fiber, were a couple of wraps, with the most popular wrap closely resembling the original “Moby Dick” 1978 Porsche 935 look. The rest of the wraps look just as good, if not better. You can check them out here!

The window mirrors for Porsche 935 don’t come from the 911 GT3 RS, which is quite surprising, but at the same time, it shows us just how much time and effort Porsche put into this car. The side mirrors come from the Porches 911 RSR race car; The current winner of Le Mans.

Looking at this car only makes me think of how much the automotive industry has progressed over the years; It’s truly incredible. Porsche outdid themselves, and it’s going to be quite some time until we lay our eyes upon a more excellent track dedicated car.

With potentially record-breaking performance specs and a design that should not only be considered automotive production, but it must also be considered art, there shouldn’t even be a debate on whether or not the Porsche 935 is worth the 1 million dollar price tag.

Porsche only made 77 of these beasts, which is understandable. However, my only hope is that these 77 Porsche 935s see a race track instead of ending up in a car collection garage, never to be used.

Here are the 10 fastest times we've ever seen on the FOS hill.
Read more