Displayed at the 1989 Los Angeles and Geneva Motor Shows 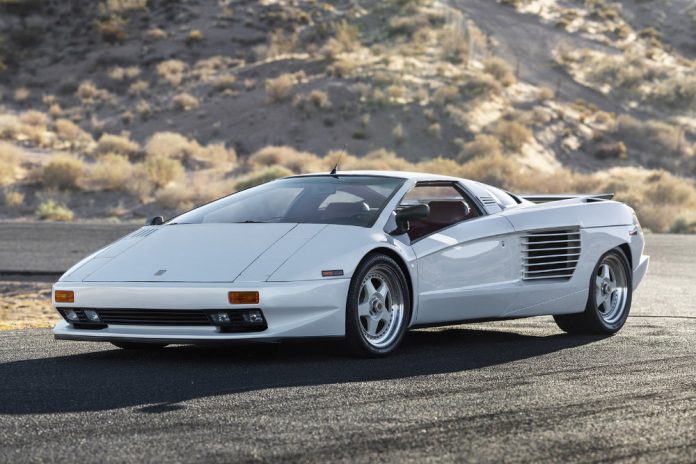 Lamborghini test driver and development engineer Claudio Zampolli relocated to Los Angeles in the 1980s, where he started a successful business servicing exotic vehicles. But his dreams did not end there: Determined to build his own supercar, Zampolli teamed up with music producer and composer Giorgio Moroder in the late 1980s and embarked on a journey to create a machine like nothing that had ever been seen before.

Zampolli wanted to build something that would grab headlines, and he knew that an innovative V-16 was the answer. Inspired by the engine layout of the Lamborghini Miura, Zampolli’s creation featured a transverse-mounted 6.0-liter V-16 with a five-speed manual gearbox. The stunning bodywork was penned by legendary designer Marcelo Gandini, who is also known for designing the Miura, Lamborghini Countach, Lancia Stratos, and countless other iconic cars.

Known as “The Father of Disco,” Giorogio Moroder worked with many of the best-selling artists of the era and won a total of three Academy Awards and four Grammy awards throughout his career. Moroder met Zampolli at his Los Angeles exotic car repair shop, and their shared interest in sports cars lead to discussions on creating a new supercar. Zampolli’s partnership with Moroder, who acted as an investor, dissolved after the creation of the first prototype due to frustrations over delays, and Moroder’s name was dropped from the production cars.

Ultimately, a total of only nine production examples (plus the prototype, for a total of 10 cars) were built due to production challenges and the sheer complexity of the cars. For Zampolli, however, Cizeta was a success. His dream of building an exclusive supercar of his own design had been accomplished—and the final result was nothing short of spectacular.

Cizeta-Moroder V16T chassis number 001 was first shown to the public at a glamorous unveiling event held in Los Angeles on 5 December 1988. Jay Leno hosted the dramatic evening, and Moroder even composed an original song for the event titled, fittingly, “A Car is Born.” Chassis 001 later was displayed at the 1989 Los Angeles and Geneva Motor Shows, introducing Cizeta-Moroder to the world.

Finished in pearl white with red leather interior, the prototype car was fully functional. Many subtle differences were made to the production V16T, however, making chassis 001 unique in its own right. Some of the exterior differences include significantly larger side air intakes with more strakes, a diagonal crease in the lower bodywork tying into the rear bumper design, different turn signals and fog lamps, and different side mirrors. Chassis 001 also has a completely unique interior, with the dashboard, central tunnel, steering wheel, door panels, and seats all different from those of the production V16T.

Giorgio Moroder retained ownership of the car after its show duties ended, and he kept it in storage before eventually deciding to have it fully recommissioned. On the recommendation of Jay Leno, chassis 001 was shipped to Bruce Canepa of Scotts Valley, California, where a full restoration began. Canepa’s team found that, even though it was a functional prototype, there were some details which needed to be improved before it saw serious use. For example, additional heat shielding was added around the fuel tanks, and the car was mechanically sorted. It was then tested by the Canepa team after restoration to ensure it was ready to return to roadworthiness; today, it still stuns audiences, just as it did in 1988.

The Cizeta-Moroder V16T is a seldom-seen but incredibly interesting supercar, and it is also one of very few post-war 16-cylinder vehicles put into production. With incredible performance, a stunning design, fascinating history, and the utmost in exclusivity, any V16T is sure to stand out wherever it goes. Chassis 001, the most famous example of the model—and the only chassis to wear the Cizeta-Moroder nameplate—is in even more rarified company. Now offered by its illustrious original owner and having benefitted from comprehensive restoration work, this is an unrepeatable opportunity for collectors.

Eight Days of Motoring Excitement Heads to WeatherTech Raceway Laguna Seca to We...

A Special Edition Ferrari Testa Rossa J will Feature in the 2022 Silver Annivers...