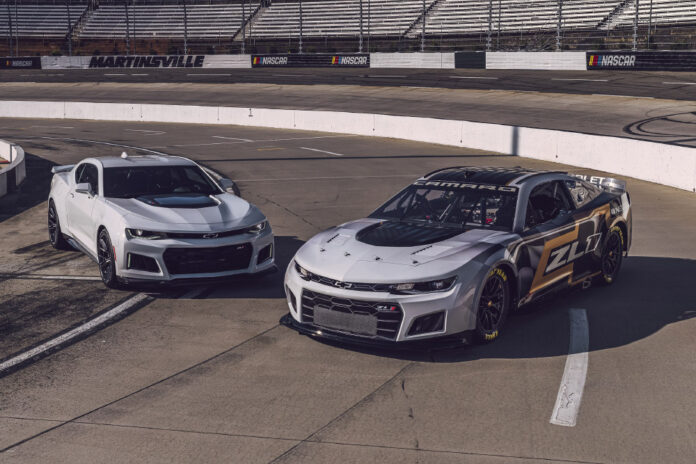 Chevrolet and other major automotive brands competing in the NASCAR Cup Series revealed their Next Gen models today. Chevrolet’s new look on the racetrack will more closely connect to its cars in the showroom when Chevy campaigns its Next Gen Camaro ZL1 race car, starting next season in the NASCAR Cup Series. The new look and features are a result of a collaborative effort by Chevrolet, the series and other original equipment manufacturers for race cars competing at the Cup level to look and perform more like their production counterparts.

“Chevrolet engineers and designers worked alongside our race teams to develop this race car while staying true to the styling essence of the Camaro ZL1. This cooperation will benefit Chevrolet both on the track and the street.” – Jim Campbell, GM U.S. vice president of Performance and Motorsports

“The Next Gen Camaro has a much stronger link to the production Camaro ZL1 in terms of styling integration, improved proportions and relevant technologies,” said Eric Warren, Chevrolet director of NASCAR Programs. “From an engineering standpoint, this is a seismic shift. It’s a completely new car that brings with it a lot of opportunity from a technical standpoint.”

Other changes to the 2022 Next Gen race car include:

Chevrolet initially introduced the Camaro ZL1 race car to NASCAR Cup competition in 2018. It was replaced by the Camaro ZL1 1LE race car in 2020, which Chase Elliott drove to a Driver’s Championship in the car’s first season.

Chevrolet has campaigned 14 different nameplates in the Cup Series, dating back to 1955, and with 798 victories is the winningest brand in NASCAR Cup Series history. Chevy’s first win was by Fonty Flock at Columbia Speedway in South Carolina in 1955, the same year Chevrolet introduced its famed small-block V-8. Since then, Chevrolet has won 39 Manufacturer Championships, including 13 in a row from 2003-2015, and 32 Driver Championships to lead all manufacturers.

The Next Gen Camaro ZL1 race car will make its points-paying debut at next season’s Daytona 500 at Daytona International Speedway in Daytona Beach, Florida, on Feb. 20, 2022.

Get a behind-the-scenes look at the Next Gen Camaro ZL1 race car Saturday, May 8, at 8 p.m. ET by joining “Chevy MyWay: Meet the All-New NASCAR Next Gen Camaro,” a free broadcast open to all.