Winner of the North West 200, second at Isle of Man TT and Macau GP 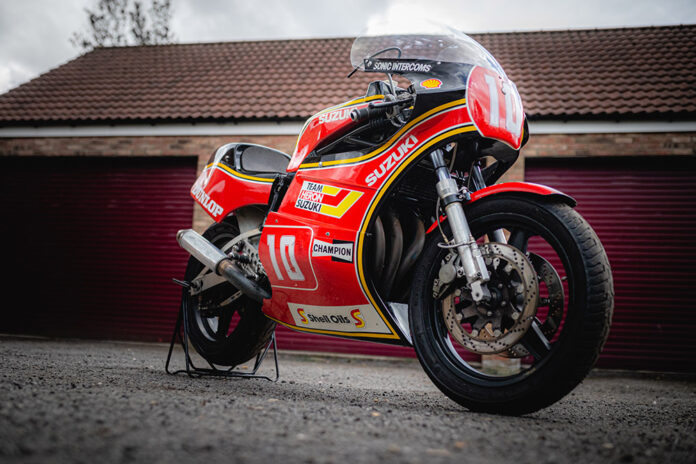 Motorcycle fans will have the rare opportunity to acquire a period correct, ex-works Heron race 1982 Suzuki XR69 from legendary seven-time TT winner Mick Grant when it is auctioned by Car & Classic ending on June 26th.

Retaining every magnesium or titanium ‘nut, bolt and washer’ since its handover from an appreciative Suzuki to the retiring racer in 1985, the machine, is according to Grant, one of only six genuine 130bhp XR69 produced. Today, historians believe this example is one of just three known to still exist and the actual machine on which he secured the 1982 North West 200 victory on the challenging 8.970-mile circuit comprising closed public roads in Northern Ireland.

The XR69 made an immediate impact in both road racing and circuits when it debuted in 1980, beating the once mighty Honda CB900s. This factory machine, first ridden by Grant in ‘82, still wears its period and original Heron Suzuki livery, flecked with stone chips and light scuffs from its successful and documented on track career. Unusually for a racing machine, it remains exactly as it last raced and retains its dry clutch, rare triple barrel magnesium carburettors, hand-finished billet forks and twin spark plugs that Grant says form the optimum specification for the 1000cc machine that featured in the 1982 Shell film You’re on Your Own – From Bray to Governor’s.

For motorcycling enthusiasts, Grant should need no introduction. Having participated in every Isle of Man TT from 1970 to 1984, he is a seven-time TT winner with further success in GP racing notching up three wins alongside a string of podiums and fastest laps alongside other notable road racing victories including Macau. Grant retired from his racing career in 1985, a year in which he was still winning TTs, and to commemorate this he was gifted this special bike from the Suzuki works team. To-date it has only had one previous privateer owner, Mick Grant.

Since receiving the XR69, Grant has demonstrated it at Spa and even won a race on it in South Africa Classic TT, and is selling it due to lack of use. Most recently it has been a major attraction at the motorcycle museum on the Isle of Man. Mick believes that there’s only a handful of people who have ridden his bike including himself and Alan Cathcart. “This XR69 is still a lovely machine and has been well maintained to enable me to continue to enjoy it on track,” says Mick Grant. “Every nut, bolt and washer is as it was in 1985, meaning it is highly original. That’s very rare for a race ‘bike that usually end up evolving over time, losing their special parts and patina.

“It still feels as fresh as when I was racing it. On this bike I had lap records and second places in the Isle of Man. I won the North West 200 on it, set the lap record Donington Park and came second in the Macau GP. A lot of great memories but it’s time for someone else to enjoy it,” adds Grant. Grant states the XR69 was, alongside the KR750 Kawasaki, one of his favourite machines, and in recent times, he has preferred to ride the Suzuki during demonstrations and relive some of its exceptional history.

Mick Grant will also supply a small cache of spares he has collected for the machine and may be tempted to sign the tanks and include a set of his leathers if the expected figure in the region of £90,000 is achieved.

“This is an incredible machine and we are so proud to offer such a piece of history owned by one of the most likable and respected people in the world of motorbikes,” says Chris Pollitt, head of editorial at Car & Classic. “Hugely original and with unquestionable providence, we are sure that demand will be strong to acquire this very, very special motorcycle.”

In less than 12 months, Car & Classic has established itself as a trusted site for online auctions of classic and specialist cars and motorcycles. With market leading protection thanks to its free escrow as well as 0 per cent buyers’ fees, the site offers clarity and security for buyer and seller alike.