By: Suzuki | Photos Courtesy of: Suzuki 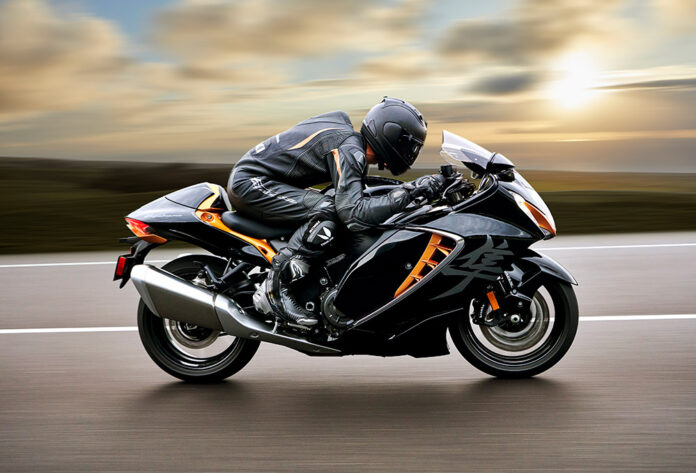 Suzuki has announced details of its latest generation Hayabusa, with the new – and hotly-anticipated – third iteration of the legendary hyperbike coming with over 550 new parts, including:

History
Launched in 1999, the Hayabusa stunned the motorcycling world and gave birth to the hypersport category. Taking its name from the Japanese for Peregrine falcon – famed for feasting on blackbirds – it delivered unrivalled performance, was immediately recognisable thanks to its now-iconic silhouette, and went on to develop cult status. Its monster engine enabled a smooth, turbine-like power delivery and an eye-widening top-end rush, but also gave it a flexibility and usability rivals could only dream of, while wind tunnel-designed bodywork allowed it to slip through the air effortlessly.

The launch of the second generation Hayabusa in 2008 boosted capacity and power, while a mid-term update in 2013 added Brembo monobloc calipers and ABS, updates that brought the machine firmly into the 21st century, yet remained faithful to the unique styling that has earned the Hayabusa its icon status.

Nearly 200,000 units later a third generation takes all that was right with the genre-defining hyperbike, but leverages the latest technologies to provide greater control and improved comfort to maintain its position as the ultimate sports bike.

Design
After the launch of the original in 1999, the Hayabusa’s striking aerodynamic silhouette has become instantly recognisable; nothing looks quite like a Hayabusa.

During the design of the third generation machine the concept of ‘the refined beast’ made sure that Suzuki designers did not bring about wholesale changes, but instead made sure the latest iteration was still immediately identifiable as a Hayabusa. And 21 years on, still nothing looks quite like a Hayabusa.

Still low, long, and wide, the new generation has faithfully inherited the DNA of its predecessors, but with sharper lines and a tough, modern look that oozes refinement, class, and ultimate performance. It has been brought firmly into the present and future-proofed for the road ahead.

The overall result is a look of higher quality and greater luxury fused with the daunting image of the fierce bird of prey from which it takes its name.

The side profile looks every inch Hayabusa, but the design features straighter, sharper lines, from the new mirror design to the famous seat hump. A fresh face comes from new vertically stacked LED headlights, nestled between the new angular air intakes. New position lights flanking the scoops double up as integrated turn signals.

Great effort was also devoted to designing the straight-edged exhaust and mufflers, that sweep up towards the tail (which itself features new LED rear combination lights) to create a mass-forward look.

Much like the design of the Hayabusa’s bodywork, the iconic machine’s clocks are just as much a part of the bike’s identity. And much like the bodywork, they too have been redesigned to embrace modern technology – in the form of a colour TFT screen – while retaining the elements that standout as Hayabusa: the two large dials that flank the new TFT display.

The large analog tachometer and speedometer gain a fresh, more attractive appearance. Features include bigger, bolder numbering that improves legibility, and raised scale markings around the periphery of each meter use LED lighting to provide a clearer view and faster recognition.

Availability
The new Hayabusa will be available in authorised Suzuki dealerships in March 2021, with an RRP of £16,499.

Hagerty Partners With Motorcycle Racer and Isle of Man TT He...

Ducati Track Days Return for 2021, Will Include Brands Hatch...