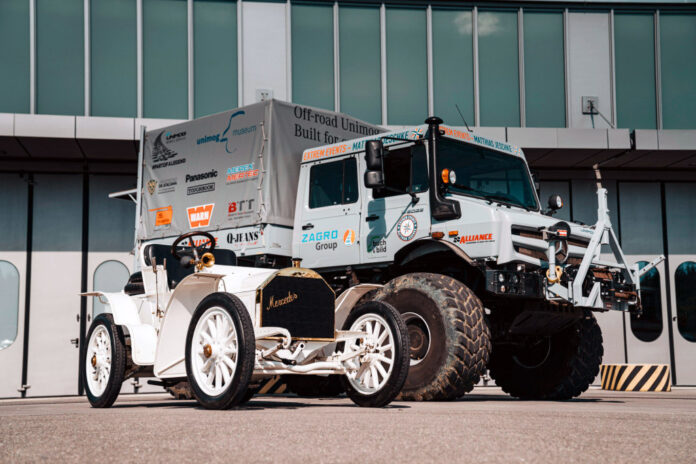 The huge tyres of the Unimog U 5023 seem formidable when compared to the narrow tyres of the Mercedes Simplex from 1902. That’s no surprise: last year the U 5023 had to overcome extremely steep climbs to break the world record for driving at high altitudes in Chile and it had to deal with sharp-edged rocks too. All that could help there were the balloon tyres with reduced tyre pressure. On the other hand the tyres on the Simplex are on a par with the typical “asphalt cutters” of that era.

Not only the tyres, but the body of the Simplex – albeit 1.7 tonnes in weight – appears very dainty when compared to the powerful Unimog weighing in at 5.5 tonnes. With regard to displacement, it’s the other way around: 5.1 litres on the Unimog – 6.8 litres on the Simplex. Both vehicles draw their power from four cylinders. But that is all they have in common. As far as output is concerned the Unimog takes the lead again: 230 hp to the Simplex’s 45 hp.

These somewhat unequal brothers met up in Immendingen – at the Daimler testing grounds. Together with elegant and sporty Mercedes-Benz passenger cars, ranging from the famous classic 300 SL to the current high performance GT sports car. All stars together – like models at a photo shoot. And the heaviest vehicle was: the Unimog.

Previous articleFormula Drift Implements Under-Car Lighting for All Pro Championship Night Events
Next articleFlat Out in the PAGANI HUAYRA BC on Track! – Shmee150

I love the key, the interior light display, the 3D dash and the lux interior
Read more
Automotive News

Meet the Mercedes-Maybach S-Class Sindelfingen 2020 – A New Definition of ...

‘Not Another Silver Gullwing’ – Restoring A Mercedes Icon with Thornley Kelham