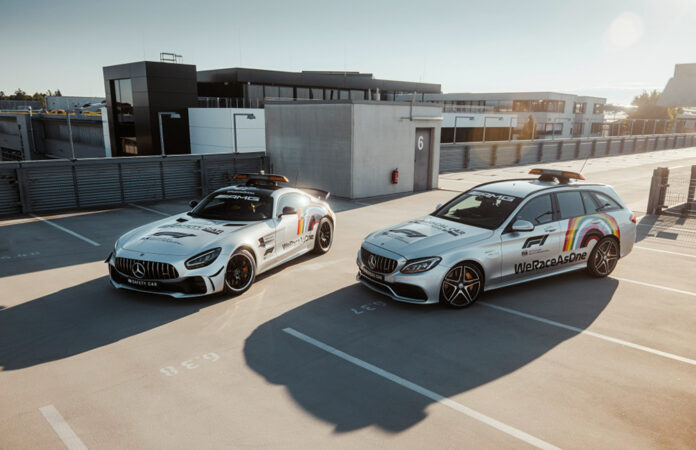 If an accident occurs on the road, ideally there will be a standardised first aid kit on hand with everything needed to treat minor injuries. A first aid kit like this – with bandages and other medical materials – can even save lives. In Germany and in other countries the first dedicated “on-board first aid kits” were launched on the market in the 1920s. Nowadays there are many such sets available as accessories.

Mandatory for the past 50 years: According to Bundesverband Medizintechnologie – the Federal German Medical Technology Association – a first aid kit has been mandatory in every newly registered vehicle in the Federal Republic of Germany since 1 January 1970. An amendment to Article 35 h of the German Road Traffic Licensing Regulation (StVZO) dating back to 1969 specified the details. It had already been mandatory for buses and coaches to carry a first aid kit since 1 August 1960. Soon the regulation was extended to all vehicles, not just newly registered ones: ever since 1 January 1972 all vehicles in the Federal Republic of Germany have had to carry a first aid kit. Article 37 of the German Democratic Republic’s Road Traffic Licensing Regulation also made on-board first aid kits mandatory for vehicles. Similar rules apply in many countries today.

Checked thoroughly: In Germany on-board first aid kits are also checked as part of the statutory inspection. According to the TÜV Rheinland testing authority, this became mandatory for the first time on 1 January 1971. After a lapse of attention to this detail for several years, checking whether a first aid kit is available in the vehicle has been a firm part of statutory inspections since 2012. Testing engineers have a close look at whether the first aid kit is complete and they also inspect materials’ best-before dates.

Box or pouch: The first ever first aid kits were kept in sturdy metal boxes, but over time plastic boxes and soft pouches made of a durable material have prevailed. In each case, first aid kits’ sterile contents are protected by individual packaging.

Hands-on expertise: First aid kits aren’t really effective unless their contents are used properly. For this reason, it is important for drivers to know how to administer first aid. As of 1970, the German Road Traffic Licensing Regulation made sure this was the case by also making a first aid course mandatory for those getting a driving licence. Successful completion of said courses is proven by a certificate of “induction to emergency measures at the scene of an accident”, which is generally issued by large aid organisations which offer the corresponding courses. Refreshing this material at regular intervals is worthwhile.

Lifesaver in vehicles: Whilst first-aiders carry their on-board first aid kit in their cars, professional ambulance crews have got significantly more comprehensive medical equipment at their disposal in their vehicles. The most typically deployed vehicles nowadays are ambulances and paramedic vehicles. For the past 25 years the Mercedes-Benz Sprinter has been a popular basis for ambulance bodies installed by specialist companies. However, the brand bearing the star had already been providing vans as successful basic vehicles before then.

Fast help: The official Formula 1 Medical Cars are an extraordinary specimen of paramedic vehicles. Mercedes-AMG has been continuously providing these powerful Estate cars since 1996. Medical Cars were introduced during the era of legendary head of the Formula 1 on-track medical team Eric Sidney “Professor Sid” Watkins, a pioneer in Formula 1 safety. Until 2004, Watkins himself worked at the races from the passenger seat of the Medical Car.

Current crew: Since 2009 South African Alan van de Merwe has been at the wheel of the Formula 1 Medical Car while Brit Dr Ian Roberts has been by his side since 2013 in his role as FIA F1’s medical rescue co-ordinator. The on-board crew is completed by two physicians from a hospital near the corresponding race track. Romain Grosjean’s collision at the Bahrain Grand Prix on 30 November 2020 underlines the significance of the Medical Car: within seconds the Medical Car was there to save the driver from a blazing fireball. Together with track marshals, the crew initiated effective first aid measures, which likely saved the racing driver’s life.

Restart with ambulance: Ambulances on the basis of the Mercedes-Benz 170 V (W 136) chassis were amongst the first vehicles Mercedes-Benz had been given permission to produce following the end of the Second World War in 1945. Cars as ambulances run by aid organisations or councils were established as of the 1920s – the same time on-board first aid kits were introduced. Visit Mercedes-Benz Museum’s Collection 3 and marvel at a 1937 Mercedes-Benz 320 ambulance (W 142) in The Gallery of Helpers.

Versatile 2021 Taycan Cross Turismo Designed for Life on and...

A constantly learning assistant for the driver and front passenger, thanks to artificial intelligence
Read more
Technology