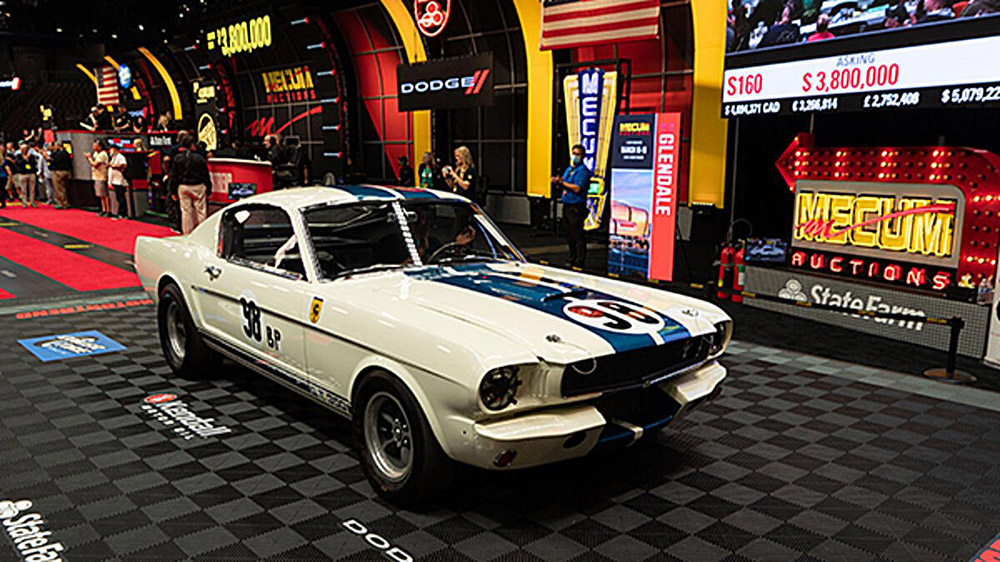 Jan. 18, 2022 – Mecum Auctions kicked off the year in Kissimmee, Florida, by rewriting history with total sales at Mecum Kissimmee 2022 reaching $217 million, courtesy of an astounding 90% sell-through rate achieved during the world’s largest collector car auction at Osceola Heritage Park. The record-setting auction claims title as the first collector car auction ever to surpass $200 million in sales for a single event. What has long been known as the world’s largest continues to be the world’s most successful as well, highlighted by:

Leading all sales for the event was the 1965 Shelby GT350R Prototype (Lot S160)—recognized as the most historically significant Shelby Mustang in the world and driven by Ken Miles to claim its “Flying Mustang” moniker. Selling for $3.75 million, the car proved to hold its value with its triumphant return to public market, and it successfully retained its crown as the most valuable mustang in the world. Just shy of landing that top seat among high sellers at $3.3 million was a 194-mile 2020 McLaren Speedtail (Lot S146) from The Michael Fux Collection that is one of just 106 built.

Main attractions took center stage and exceeded expectations, highlighted, perhaps most notably, by the 1951 Hirohata Mercury Custom (Lot S152)—the iconic custom built by Sam and George Barris and arguably the most famous custom car of the classic era—which sold for $2.15 million. The 1994 Porsche 911 Turbo (Lot S164) that was featured in the film “Bad Boys” and is one of fewer than 350 produced for the U.S. market in 1994 became another leader among top sales at $1.43 million.

The complete top 10 collector car sales at Mecum Kissimmee 2022 include: