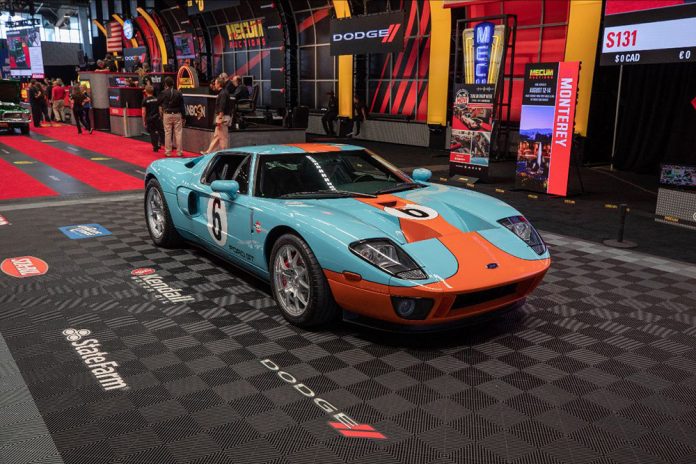 Highly anticipated by customers and fans from the Midwest region, Mecum’s inaugural Tulsa collector car auction attracted crowds of enthusiasts to gather in attendance at River Spirit Expo at Expo Square in Tulsa, Oklahoma, for the June 11-12 occasion. The auction ultimately continued the company’s streak of highly successful events and exceeded expectations with total overall sales cruising past $21.2 million. Of the 660 cars to cross the auction block in Tulsa, 539 hammered sold for an impressive sell-through rate of nearly 82%.

In addition to its top-selling GT, The Elkin Brothers Collection proved to be a hot ticket in Tulsa overall, with all 14 vehicles in the group hammering sold for a total of more than $1.17 million.

The complete top 10 collector car sales at the Tulsa 2021 auction include:

For access to complete auction results, sign up for a free MyMecum account at Mecum.com. The next live event on the Mecum calendar is Mecum’s Orlando Summer Special, slated for July 29-31 at the Orange County Convention Center in Orlando, Florida. The auction is set to feature 1,000 classic and collector cars on offer, led by vehicles like a 1970 Dodge Challenger R/T, the 1969 Dodge Daytona NASCAR driven by country music legend Marty Robbins and more. For more details on upcoming auctions, to consign a vehicle or to register as a bidder, visit Mecum.com, or call (262) 275-5050 for more information.