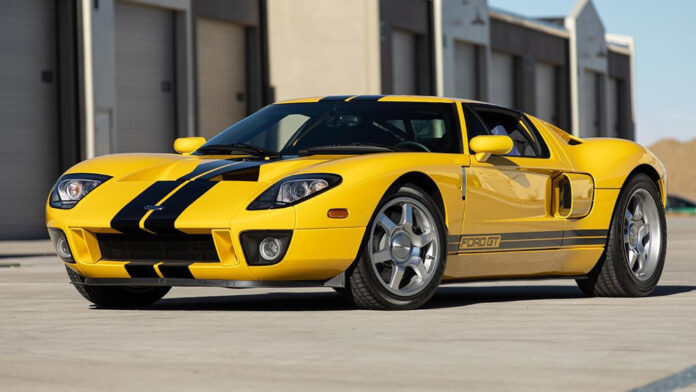 Mecum Auctions, the world’s largest collector car auction company, is set to return to State Farm Stadium this March 16-19 for its fourth annual auction in Glendale, Arizona, with an estimated 1,500 vehicles and nearly 200 pieces of Road Art and memorabilia items to be offered.

Among the highlights is a pair of Ford GTs, the first being a 2006 Ford GT that was previously owned by NFL Hall of Famer John Elway. Cloaked in yellow with the optional black stripes and a black interior, the GT is offered at no reserve with just 232 miles on the odometer. The other is a 2020 Ford GT that is finished in Triple Yellow Tri-Coat with Shadow Black overtop stripes—an optional color scheme that cost $17,500—and shows just 1,270 miles on the odometer.

Other main attractions include a Ferrari Classiche-certified 1967 Ferrari 275 GTB/4, S/N 9495 and Scaglietti Body No. A0037, with a correct 3286cc four-cam V-12 engine that is believed to be one of only two spare engines produced by the factory; research suggests that it was mounted on the chassis in the late 1960s. The Glendale auction will additionally feature a 1929 Duesenberg Model J Murphy Convertible Coupe, J-142/2165, that was the recipient of an AACA National First Prize and ACD Category 1 certification, and it’s powered by a 420/265 HP Lycoming inline 8-cylinder engine and 3-speed manual transmission.

The Mile High Collection will bring a Ford- and Shelby-heavy selection to the Glendale auction block, ranging from a 1969 Shelby GT500 Fastback and a 1969 Ford Mustang Mach 1 Fastback with the 428 Super Cobra Jet and Drag Pack, to a 2020 Ford Shelby Signature Series with just 103 miles on the odometer, the aforementioned John Elway GT and more. The collection isn’t just limited to Fords though, as it also packs a punch from the Mopar stables, including vehicles like a 2020 Dodge Challenger 50th Anniversary Limited Edition and a 32-mile 2021 Dodge Durango SRT Hellcat.

Bidder registration for Mecum Glendale 2022 is available in advance online at Mecum.com and on-site at the auction for $200, and it includes admission for two to all four auction days. For those unable to attend in person, enhanced remote bidding options are also available, with options for both online and telephone bidding. Doors open daily at 8 a.m. with the vehicle auction beginning at 10 a.m. General admission tickets are available in advance online for $20 per person, per day, and for $30 at the door and online after March 15; children 12 and younger receive complimentary admission. Presiding health and safety protocols will remain in place for all those in attendance.