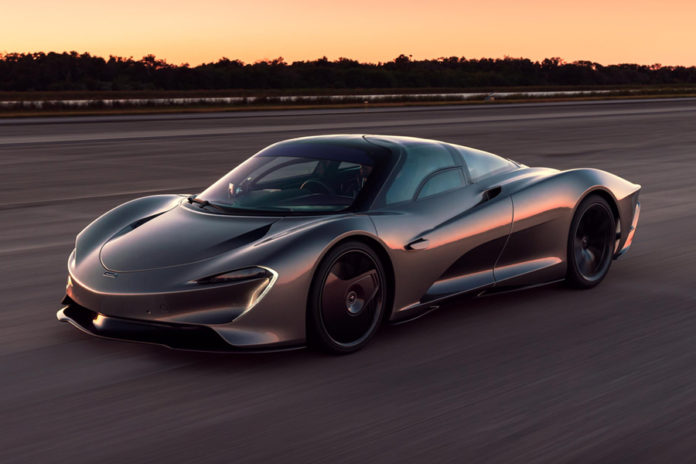 McLaren North America has achieved an important milestone with its 7,500th vehicle delivered in the US since its market debut in December 2011.  The 7,500th vehicle was the first McLaren Speedtail to be handed over to a US customer. Just 106 examples of McLaren’s hybrid Hyper-GT will be produced, making it the most exclusive McLaren road car to date. A combined 1,055bhp and 848lb-ft of torque enables the Speedtail to reach a 250mph top speed and achieve 0-186mph acceleration in less than 13 seconds, making it also the fastest McLaren ever produced.

McLaren Automotive has established itself as an iconic supercar brand in less than nine years, debuting in North America in 2011 with the McLaren MP4-12C and following up with models such as the 650S, 675LT and iconic McLaren P1TM. McLaren achieved steady growth that doubled in 2016 following the introduction of the 570S – the first of the Sports Series line up. The 720S was launched in 2017 as McLaren’s first ‘second generation’ supercar, expanding the growth of the brand even further. More recently, McLaren has introduced other award-winning models including the 600LT and 600LT Spider and the stylish new McLaren GT. Additionally, the brand has expanded the Ultimate Series line-up with the innovative track-focused Senna, the Speedtail Hyper-GT and Elva roadster models.

These models helped McLaren North America to reach 5,000 sales in April of 2018, and this week the 7,500th vehicle was delivered.

“We are proud of what the brand has become in a relatively short period of time. When you consider the acclaimed performance cars we have brought to market in less than ten years, we have established McLaren as one of the most exciting brands and a formidable competitor in the supercar segment,” comments McLaren North America President, Tony Joseph.

“We already have a rich heritage, our dealership network is among the best in the industry, and we are fortunate to have some of the most passionate and enthusiastic clients that I have ever come across throughout my career. With the McLaren 765LT and Elva arriving in market later this year, and the first of the McLaren Speedtails currently being delivered, the future looks better than ever for the brand.”

The newest production car currently offered by McLaren is the new GT, which features the engaging drive McLaren is known for, as well as the space, comfort and usability expected of a Grand Tourer. Featuring a 612bhp 4.0-liter, twin-turbocharged V8 mated to a 7-speed SSG transmission that delivers linear, seamless and relentless acceleration, the performance statistics speak for themselves: 0-60mph in 3.1 seconds, while 0-124mph is dispatched in 9.0 seconds. One of the most defining elements of the new McLaren GT is its dynamic prowess. The suspension, steering and brakes are all bespoke to the car and are optimized to provide an outstanding Grand Touring drive experience with inherent balance, responsiveness and precision, and with ride comfort setting new McLaren standards. The McLaren GT is available at retailers with a starting MSRP of $210,000.

Hispano Suiza Carmen Boulogne: A Journey in the World of Aut...

McLaren Artura is Tabbed as its Next-Generation High-Performance Hybrid Supercar...

How does this American muscle stack up when placed next to a modestly tuned supercar?
Read more
Feature Videos