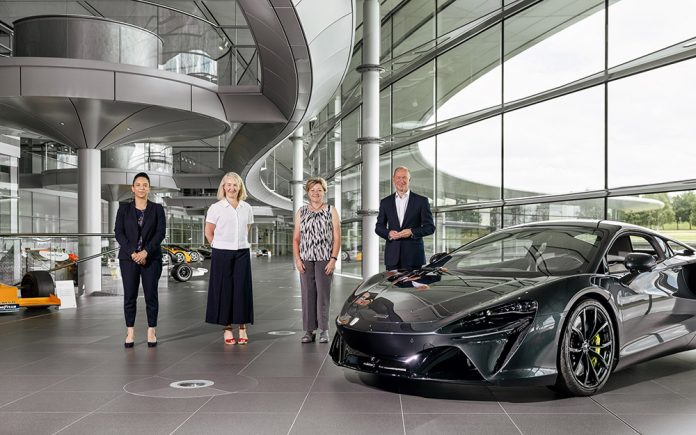 Plan International and McLaren Automotive together pledge to support, empower, and inspire the next generation to reach their full potential.

The new partnership brings together McLaren Automotive’s long-standing commitment to inspire and encourage young people to take up careers in science, technology, engineering, and maths (STEM), with Plan International’s track record of challenging gender stereotypes to support girls globally to stay in school and open opportunities to pursue fulfilling careers.

For more than eight decades, Plan International has been working with children globally, making sure they have access to the education, health care, clean water and future opportunities they need to thrive.

The charity now works in 75 countries around the world to advance children’s rights and equality for girls.

Supercar company McLaren Automotive was founded a decade ago and now operates in over 40 territories around the world. To support the development of some of the most innovative cars in the world and key new technologies, McLaren is committed to developing and inspiring the next generation of engineers, scientists and designers by deploying its network of McLaren STEM ambassadors to talk to children – and parents alike – around the world to enhance the perception of education and careers in the automotive industry.

As part of its broader sustainability objectives, McLaren Automotive works with the likes of the BBC and LEGO, as well as schools, universities and colleges, to promote STEM and careers, promote powerful male and female role models for children and to empower parents and guardians to have positive education conversations.

“I am delighted that McLaren Automotive will be supporting Plan International’s work and I would like to welcome them and their dedicated teams around the world as our global charity partner.

“We chose Plan International because we both share a deep passion for improving children’s access to education around the world, with Plan International able to contribute its considerable expertise and skills to McLaren’s own long-standing drive to furthering young people’s educational choices and standards.

“Welcoming Plan International is a proud moment for all of us at McLaren Automotive and we are thrilled to get going on our partnership. Look out for exciting news of what we have planned in the coming months.” – Mike Flewitt, Chief Executive Officer of McLaren Automotive

“The partnership with McLaren Automotive is an exciting opportunity to inspire and unlock long-term change for children, especially girls.

“The automotive industry has traditionally been male dominated and we are inspired by McLaren’s commitment to addressing this. We are looking forward to working together to raise awareness and to challenge gender stereotypes and support girls’ participation in STEM subjects and in education – the most powerful tool to unlocking every child’s potential.” – Rose Caldwell, CEO of Plan International UK

As part of the partnership, the Plan International logo will feature alongside McLaren’s other Partners at key events around the world and on the company’s digital and social channels.

Fans, customers and employees alike will have the chance to help raise awareness and money for the work that Plan International undertakes and to help drive positive change.

For more information about the partnership and Plan International’s work visit https://cars.mclaren.com/en/about/partners.