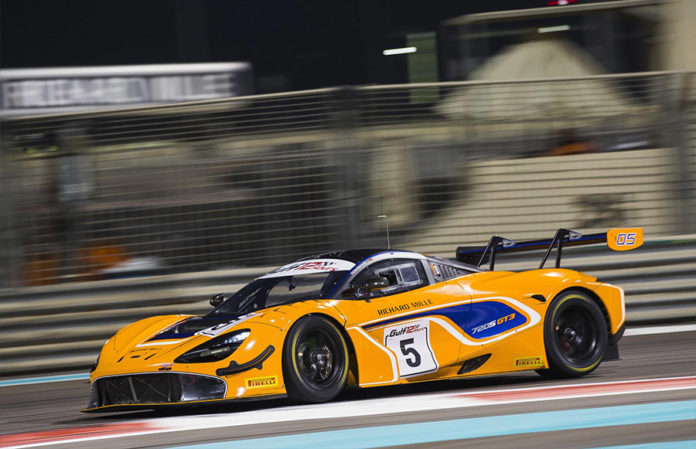 The brand new McLaren 720S GT3 came tantalisingly close to a stunning win on its global competitive debut at the Gulf 12 Hours in Abu Dhabi on Saturday December 15. The first GT racer designed and built in-house by McLaren Customer Racing dominated much of the second half of the race at the Yas Marina Circuit before suspension trouble dropped the car to a nevertheless impressive fifth place.

The #5 car’s pace – and a totally trouble-free run for 10 hours in the hands of McLaren Automotive Factory Driver Ben Barnicoat (GB) and his teammates Álvaro Parente (PT) and Shane van Gisbergen (NZ) – turned heads in a paddock that included top GT racing cars, teams and drivers from around the world. 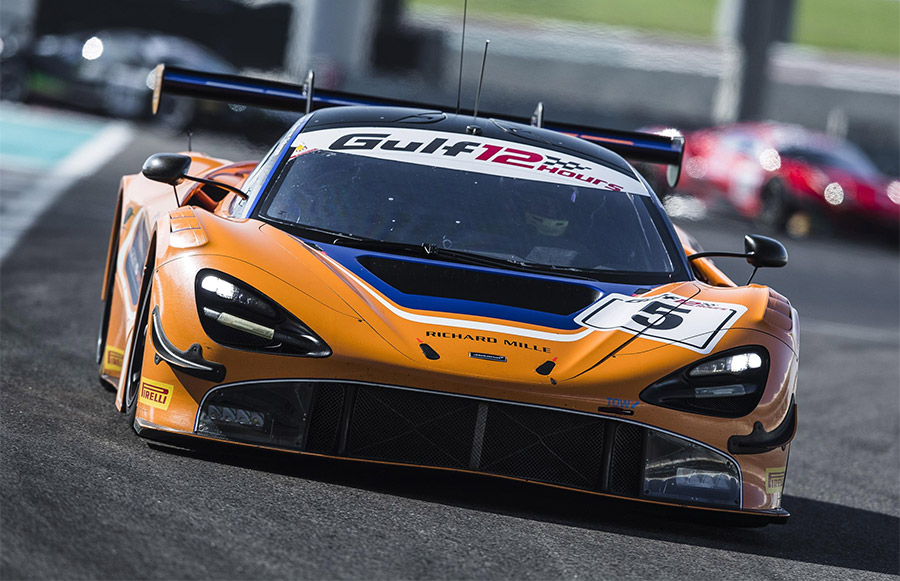 The McLaren 720S GT3 run by McLaren Customer Racing was quick out-of-the-box, setting encouraging times during the three practice sessions on the Yas Marina circuit – home of the Abu Dhabi Grand Prix. It was in the hunt for pole position in its first ever qualifying session, with Barnicoat immediately topping the times. Co-drivers Parente and van Gisbergen continued to show impressive pace, however the car was pipped at the post by just half a tenth on aggregate times to take second in the GT3 class ahead of 16 competitors and third overall on the 33-car grid. 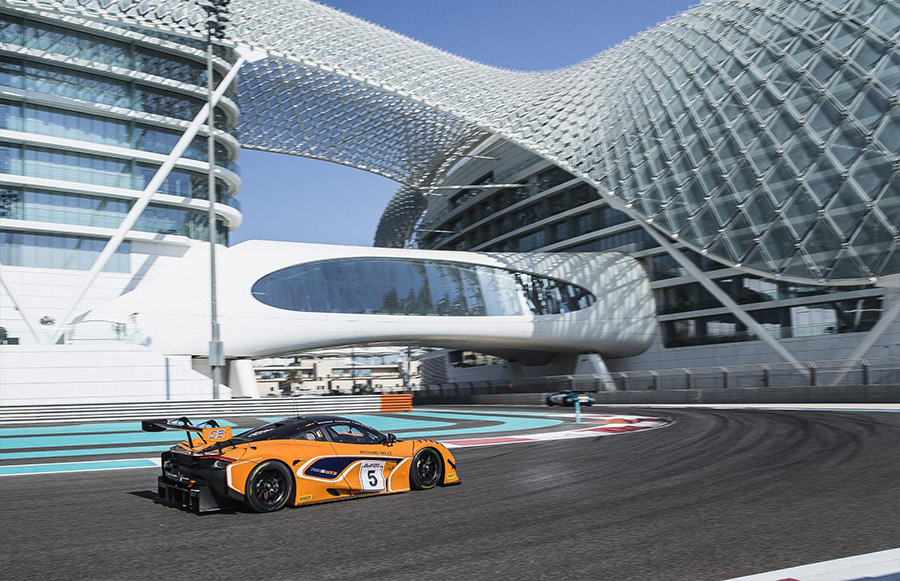 The race itself was split into two six-hour events and in the first of these, Barnicoat took the 720S GT3 into the lead after just an hour of its racing career. The combined efforts of all three drivers and the McLaren Customer Racing team would keep the Papaya Spark-coloured car in the hunt for the whole six hours, despite several incidents and two safety car interventions. The team reached the mid-point of the race in second overall, and ready to attack from the start of the second race.

The second part of the race showed the potential of the new McLaren 720S GT3, as the #5 car headed the charge to the flag. Within two laps van Gisbergen had taken the lead on the back straight, and by the end of Hour 10 the car had lapped the entire field. 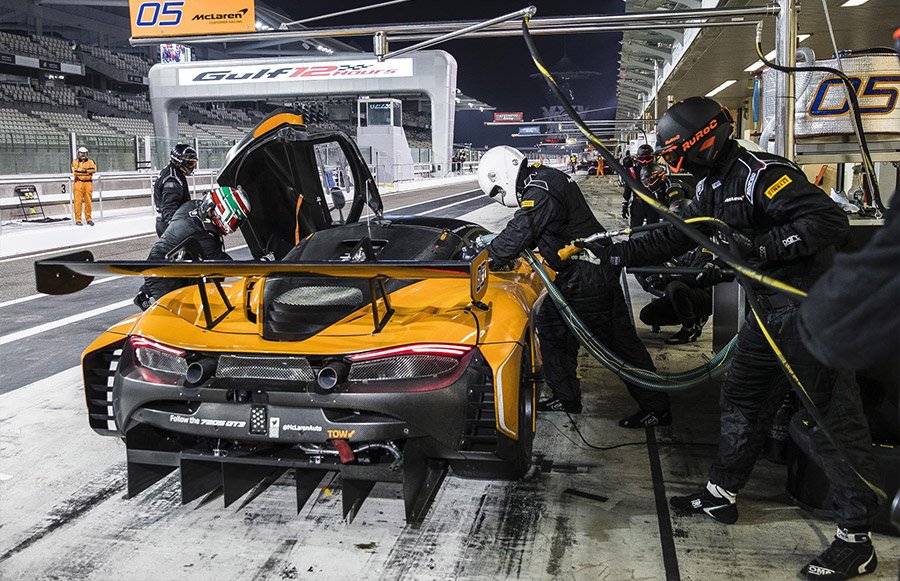 Unfortunately, the dream of a win on the car’s global race debut was over moments later when an issue with the right front suspension forced van Gisbergen into the pits for repairs. Rapid work from the team saw the car return to action after just 13 minutes and with Ben Barnicoat back behind the wheel, set about chasing down the leaders. In the closing 90 minutes, the gap was reduced and the #5 720S GT3 crossed the line an impressive fifth in the GT3 Pro class and eighth overall, completing 309 laps of the Yas Marina circuit.

“It’s been a great start to the competitive life of the 720S GT3, which has proven itself against a world-class field and just as importantly, successfully progressed the development programme. I am incredibly proud of the efforts of the team at the circuit and back in Woking, who have achieved this result against world-class opposition. 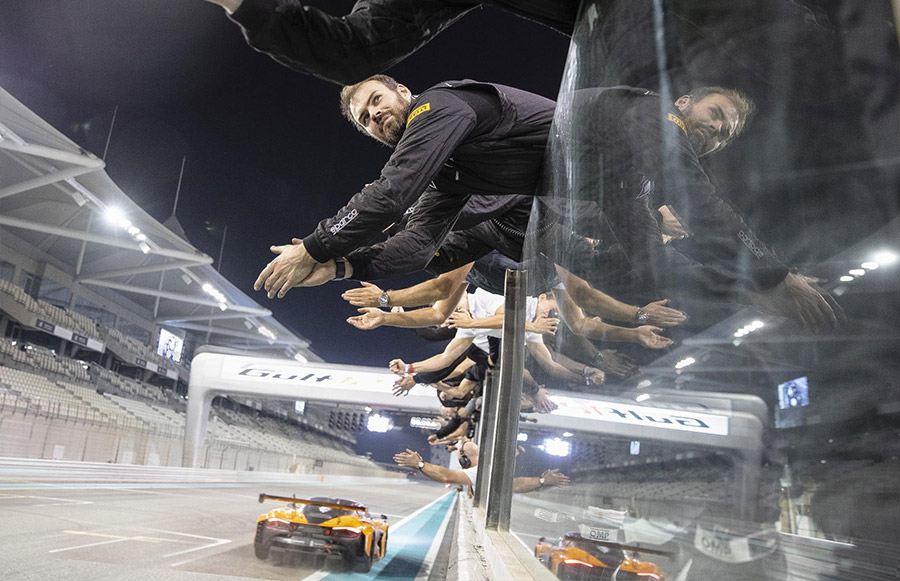 “The experience of going wheel-to-wheel with the teams and cars that our customers will be aiming to beat with the 720S GT3 in the future has proved invaluable as we continue to learn lessons about how to get the very best from the car. Add that experience to the vast amount that we have learned during the design, build, testing and development with the McLaren 720S GT3 so far and we are growing in confidence about the prospects for the newest racing member of the McLaren family.” – Dan Walmsley, Motorsport Director, McLaren Automotive

The McLaren Customer Racing team will continue the 720 GT3 test and development programme, ahead of homologation early in 2019 which will enable the car to compete in a variety of GT3 racing championships around the world.

Previous articleMeridien Modena, Lyndhurst is Awarded ‘Ferrari Dealer of the Year 2018’
Next articleIncredible ‘Best in Black’ Collection of Corvettes at Mecum’s Kissimmee Auction

‘Life is Measured in Achievement, Not in Years Alone&#...